Azerbaijan President Calls for Return to “Historic Lands” in Armenia

Armenian officials responded by casting doubt on Azerbaijan's claim to its own lands. 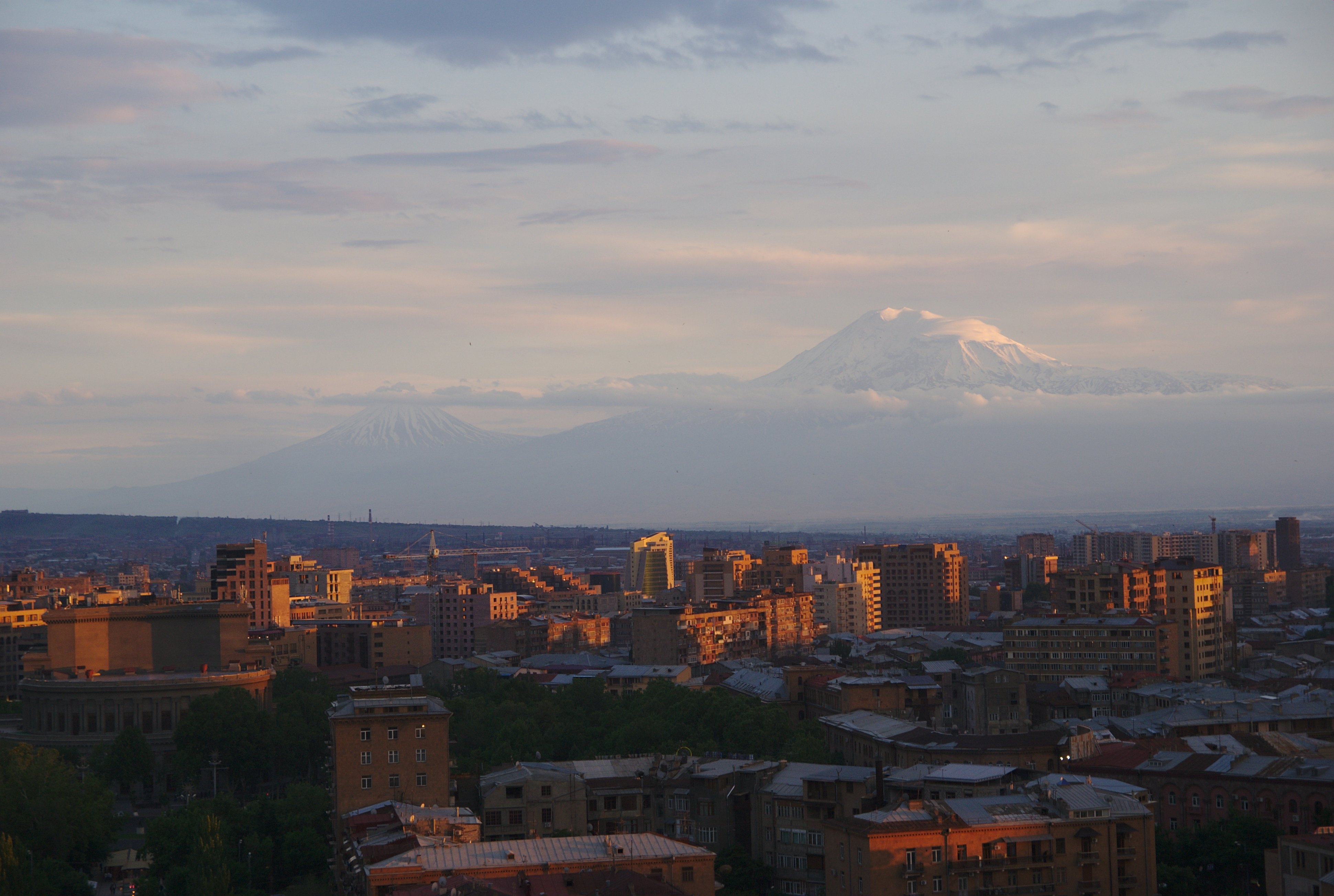 A view of Yerevan, Armenia with Mount Ararat in the distance. (Photo by Ogannes/CC BY-SA 2.0)

Azerbaijan's president has claimed that large parts of Armenia's territory are Azerbaijan's “historic lands,” vowing to return to them. The fraught assertion threatens to derail any progress, however slight, in peace talks between the two countries in recent months.

“Yerevan is our historical land and we Azerbaijanis must return to these historical lands,” President Ilham Aliyev said at a congress of his New Azerbaijan Party on February 9. The speech was in effect the opening of his campaign for a fourth presidential term; earlier in the week Aliyev had unexpectedly announced snap elections to be held in April.

In the speech, Aliyev also referred to the Zangezur region, in far southern Armenia, and the region around Armenia's Lake Sevan (known in Azerbaijani as the Göyçə region) as “our historic lands.” Azerbaijanis' return to those territories, he added, “is our political and strategic goal, and we need to work step-by-step to get closer to it.”

Aliyev's phrasing left some ambiguity as to exactly what he meant by Azerbaijanis “returning” to Armenia, but the spokesman for Azerbaijan's foreign ministry, Hikmet Hajiyev, said that it did not imply any territorial claims. “It is not a territorial claim, but restoration of historical justice,” Hajiyev told Eurasianet.org by email. “Azerbaijanis have the right to return to their historical lands, to claim their properties and visit the graveyards of their great-grandfathers.”

The question of “historical lands” in the Caucasus is a fraught one. In the pre-Soviet era, the region was far less ethnically divided: Armenians did in fact represent a minority in the areas that Aliyev mentioned, and Muslims (including Azerbaijanis) the majority. But Azerbaijanis were only a small minority in Baku before the Soviet era; on the eve of World War I they were nearly outnumbered by Armenians. Armenians, meanwhile, were the majority in much of eastern Turkey before being driven out in the World War I genocide.

Soviet Armenia and Azerbaijan became much more ethnically homogeneous through the course of the 20th century, and the war between the two sides in the 1990s finalized that process. There are now only tiny numbers of Armenians living in Azerbaijan, and vice versa, mostly elderly widows.

Armenian officials responded to Aliyev's comments by casting doubt on Azerbaijan's historical presence on its own lands. “The statement about territorial claims of the president of Azerbaijan, a state appearing on the political map of the world only 100 years ago … yet again demonstrates the racist character of the ruling regime in Baku,” said Tigran Balayan, spokesman for Armenia's foreign ministry.

One clear effect of Aliyev's comments seems to be a cooling of hopes for progress in talks over Nagorno Karabakh, which had made some fitful steps forward as of late. “Until Azerbaijanis rejects their maximalist, unrealistic expectations about the negotiations, but instead rave about seizing Yerevan or Zangezur, we will not harbor much hope that the issue will be resolved,” Armenian President Serzh Sargsyan said at a February 12 press conference.

Aliyev has in the past made similar claims about parts of Armenia being Azerbaijan's historical home, but Baku now appears to be laying the intellectual groundwork to make the case more aggressively. Since his speech, government officials' Twitter accounts have been promoting a high-production-quality video, produced by the Ministry for Youth and Sport, arguing for Yerevan's Azerbaijani origins. “The city … is clearly one of Azerbaijan's cultural centers,” the narrator says.

“The younger generation, and the entire world, should know about that,” Aliyev said in his speech. “I am glad that scientific work is being done, films are being produced, exhibitions are organized about the history of our ancestral lands. In the years ahead we must be more active in this direction, and presentations and exhibitions should be organized in various corners of the world.”

Aliyev's claims this time also appear to be connected with the 100th anniversary of the founding of the Azerbaijan Democratic Republic, with which the current regime has a complicated relationship. While the government likes to use the ADR's progressive legacy – it was the first Muslim country to give women the right to vote – it is uneasy with the embrace of the ADR by Azerbaijan's current-day liberal opposition.

In the past, Aliyev has blamed the ADR leadership for the loss of Yerevan and Zangezur to Soviet Armenia. While his comments last week did not repeat that accusation, some pro-government commentators made the connection.

“This year is the 'Year of the Republic,'” said one commentator, Arzu Nagiyev. “In this context, it is important to pay attention to the issue of Azerbaijan's historical lands, to whom and by whom these lands were given away.”

“In the days [of the ADR], a discussion took place about a capital for Armenians,” wrote Farhad Mammadov, an analyst at the government-run Center for Strategic Studies, in a Facebook post on Aliyev's comments. “The only city in the South Caucasus where Armenians were a majority was Alexandropol (today's Gyumri), but it was then occupied by the Turks. On May 29 [1918], Fatali Khan Khoyski [first prime minister of the ADR] explained the handover of Yerevan to the Armenians, saying: 'The concession of Yerevan is a historical necessity, but for us it is an unavoidable and bitter reality.’”

Other Azerbaijani commentators justified Aliyev's statements by pointing to similar comments by Armenians, who at times brag about “drinking tea in Baku” after a decisive military victory over Azerbaijan. Armenians also appear increasingly uninterested in Nagorno Karabakh – the de jure Azerbaijani territory that is de facto controlled by Armenian forces – returning to its former multiethnic state.

“Unlike Armenia, where as a result of ethnic cleansing hundreds of thousands of Azerbaijanis and Kurds who had lived there for centuries were expelled, and which occupies Azerbaijan's territory and is trying to legalize its territorial gains, President Ilham Aliyev speaks about Azerbaijanis returning to Yerevan and Zangezur, to the place where they historically lived, not raising the issue of joining those territories to Azerbaijan,” Azerbaijani MP Rasim Musabekov told local media. “This is one of the fundamental differences between Baku and the Armenian chauvinists who contravene international laws.”