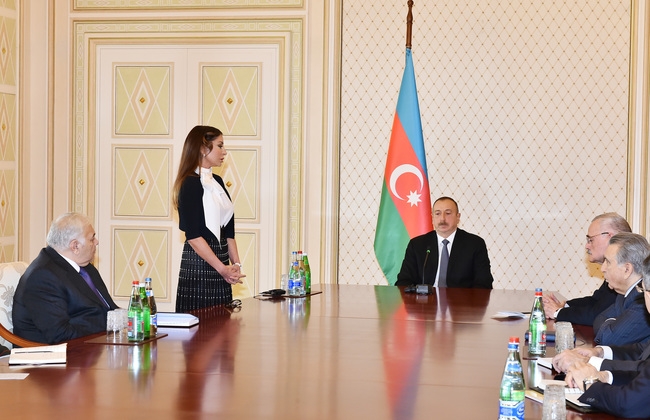 First Lady Mehriban Aliyeva at a meeting of Azerbaijan's Security Council at which she was named vice president of the country. (photo: president.az)

Azerbaijani President Ilham Aliyev has appointed his wife, Mehriban Aliyeva, as the country’s first vice president, a move that had been anticipated since the VP post was created as the result of a constitutional referendum last year.

The move places the first lady first in line of succession, a responsibility that formerly fell to the prime minister. It was condemned and mocked in roughly equal measure; opposition politician Ali Kerimli called it “an official step towards the establishment of a monarchy.” Pro-government voices were relatively muted on the news. “Without doubt, everyone had been expecting Mehriban Aliyeva in particular to be appointed to the position of First Vice-President of Azerbaijan,” Novruz Mammadov, deputy head of the presidential administration, wrote on Facebook.

Aliyeva professed to be humbled by the appointment. “Mr. President, I express my deep gratitude to you for this high confidence in me,” she said at a meeting of the Security Council. “Over the past years, your ideas of statehood, patriotism, your courageous protection of Azerbaijan’s national interests, and your unity with the people of Azerbaijan were an example for me.”

The announcement seems to confirm suspicions that the constitutional referendum was designed primarily to entrench the Aliyev family’s hold on power and provide a legal basis for Ilham Aliyev’s dynastic aspirations. Although there have been no challenges of note to the family’s rule since Heydar Aliyev, Ilham’s father, came to power in the mid-1990s, the country’s economic crisis, last year’s protests around the country, and western support for the Euromaidan revolution in Ukraine may have unnerved the Aliyevs enough for them to take steps to insulate themselves against a potential palace coup.

To that end, last week President Aliyev fired his powerful and long-serving Minister of Transport Ziya Mammadov – a man once named “Azerbaijan’s Most Nepotistic Minister” by Azerbaijani exile media outlet Meydan TV. Mammadov was best known internationally as the father of Anar Mammadov, former business partner of United States President Donald Trump in the now-defunct Trump Tower Baku and founder of a similarly defunct Azerbaijani lobbying group in the U.S., but it is unclear what role, if any, his family’s international connections may have played in his fall from grace.

The referendum actually created multiple vice presidents, but today’s announcement mentioned only one. As the referendum also abolished the age limit for the presidency, speculation has been rife that President Aliyev might nominate his teenaged son, Heydar Jr., for the post. Heydar Jr. is no stranger to the family business, and he first came to international attention in 2010, when, as an 11 year old, he spent $44 million on waterfront property in Dubai.

Despite being an MP since 2005, Aliyeva has appeared only infrequently in parliament and according to cables released by Wikileaks, rarely shown interest in public affairs outside the charitable Heydar Aliyev Foundation. She is a member of the Pashayev family, widely believed to be the only Azerbaijani family that rivals the Aliyevs in power and wealth.

In a manner that has become typical for Azerbaijan, the announcement was foreshadowed by a spate of arrests and harassment of critical activists and journalists. In the days before Aliyeva's appointment, several were detained and quickly sentenced to administrative arrest on spurious charges, and on February 19, Baku police detained 12 members of a popular Netherlands-based Azerbaijani blogger’s family in an attempt to silence his criticism of the Aliyev government.

Note: Mike Runey is a Programme Officer for Eurasia at Civil Rights Defenders. He writes here in his personal capacity and the views expressed here are his own.