Azerbaijan: Prison for a Blogger, Free Flats for Reporters 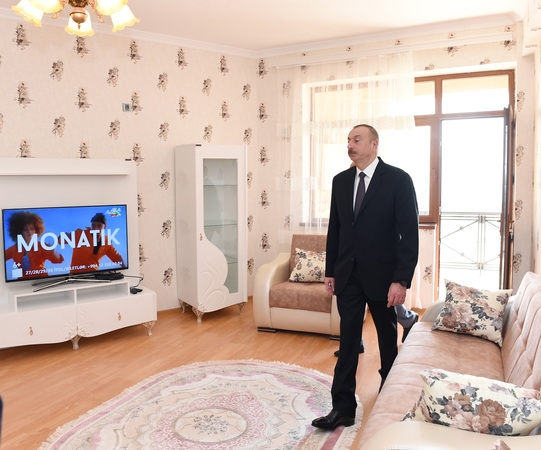 Azerbaijani President Ilham Aliyev sizes up one of the 255 free flats for journalists provided by the Azerbaijani government.

It’s been a notable week for Azerbaijan’s efforts to control both foreign and Azerbaijani narratives about itself. Russian-Israeli-Ukrainian blogger Alexander Lapshin got a three-year prison sentence for traveling to Nagorno Karabakh -- the first such sentence of its kind. And Azerbaijani journalists who tow the government line received some state-financed accommodation, too -- 255 free apartments, complete with high-speed internet connections.

Perhaps it's no surprise that events related to both milestones occurred on the same day, July 20.

The first, the sentencing of travel-blogger Lapshin to three years in prison for allegedly illegally traveling to Karabakh and calling for its independence from Azerbaijan has sparked relatively little international blowback.

Lapshin was extradited to Azerbaijan from Belarus in early 2017 -- the first such foreigner to be so treated for crossing into breakaway Karabakh without first obtaining Azerbaijani permission. Acknowledging "moral" rather than "legal" guilt "before the people of Azerbaijan," he pled innocent to the charges against him.

Lapshin’s lawyer, Eduard Chernin, who plans an appeal, has raised the possibility that his client could be extradited to one of his three countries of citizenship. Kremlin spokesperson Dmitry Peskov, however, responded that Lapshin’s potential extradition to Russia is “not a Kremlin topic,” RIA Novosti reported.

Israel and Ukraine, for their part, do not appear to have commented.

The Russian foreign ministry, though, aired its opposition to “the criminalization of visits by journalists or simply private individuals” to Karabakh, a territory whose de facto authorities are backed by Moscow’s prime Caucasus ally, Armenia.

The ministry stated that it would “continue the work defending [Lapshin’s] legal rights and interests . . .” and added that the Russian embassy in Baku remains in touch with the blogger and his lawyers.

Where that will get him remains to be seen, however. During Lapshin’s trial, the Azerbaijani government, citing the criminal code, asserted that he “must be expelled from Azerbaijan” after completing his sentence, but do not appear to have indicated they'd consider shipping him out earlier.

Protesting Lapshin’s sentence, the New-York-City-based Committee to Protect Journalists on July 20 urged the Azerbaijani government “not to contest the journalist's appeal and to release him unconditionally."

With tensions over Karabakh again on high simmer, there appears little chance of that right now. The foreign ministry holds that "justice has been served."

Speaking on July 20, Azerbaijani President Ilham Aliyev set the tone. “[M]edia representatives from foreign countries either unintentionally or deliberately transmit false and distorted information about the conflict” over Nagorno Karabakh to the public, he noted.

The occasion for Aliyev’s homily was the unveiling of 255 free apartments in Baku for selected "patriotic" journalists and their families. The president’s administration decides who gets the property, to be handed over on July 22.

When the program kicked off in 2013, most of the flats went to pro-government journalists, but, as EurasiaNet.org then reported, a few financially squeezed reporters for opposition-linked outlets also moved in on the government’s dime.

To judge by the 63-plus-percent increase in the program’s apartments since then, demand for the accommodations is still running strong. And Baku has every intention of keeping it going. Yet another 255-apartment residence is in the works.

As Aliyev put it, “[n]ational interests should be above all and Azerbaijan’s information space should be protected from attempts [at] external influence.”

Whether via a prison cell or a wallpapered flat with TV, it appears.