A jazzy kids’ song is the latest salvo in Baku’s ongoing offensive against the French leader. 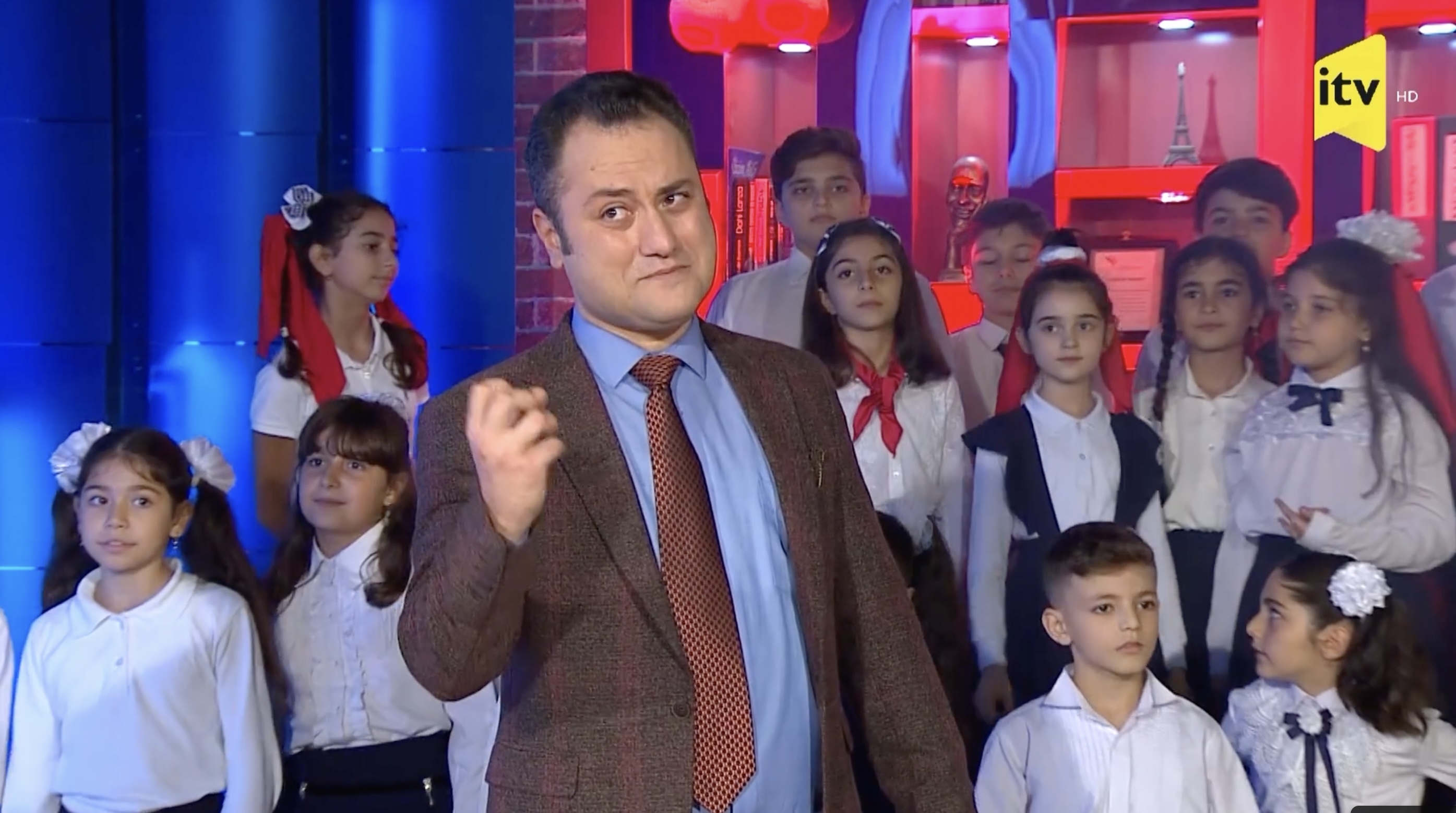 Baku’s ongoing campaign against French President Emmanuel Macron has now drawn in Azerbaijan’s children, a group of whom were enlisted to sing a song on public television insulting him and accusing him of being dishonest and pro-Armenian.

The three-minute song, posted on the network’s Facebook page on October 18, features a presenter, Aziz Aliyev, singing along with a chorus of children.

“He is pro-Armenian,” Aliyev sings.
"What can you say to this person?
He gives us false promises
He dances with Pashinyan
He humiliated himself like this
Say - who is that person?”

The children in the chorus then respond, syllable-by-syllable. “EM-MAN-U-EL!”

The French leader has become a popular punching bag in Azerbaijan following comments he made in an October 12 television interview accusing Azerbaijan of launching “a terrible war” in 2020 to retake territories it had lost to Armenians in the first war between the two sides in the 1990s. Macron also said that Azerbaijan launched the attacks that started the escalation in fighting in September; Baku maintains that its offensive was in response to Armenian “provocations.”

Macron’s comments triggered an avalanche of criticism. While France has long been suspect in Azerbaijani eyes, seen as generally favorable to Armenia, Macron up until the interview had a reasonably cordial relationship with his Azerbaijani counterpart, Ilham Aliyev.

On October 6, Macron had met with Aliyev in Prague, along with European Union President Charles Michel and Armenian Prime Minister Nikol Pashinyan. At the time, Aliyev spoke approvingly of Macron’s participation in the meeting.

But following the TV interview, Aliyev said that Macron was invited only out of politeness given that France had no place in the mediation process following the sidelining of the Minsk Group, the diplomatic body that brokered Armenia-Azerbaijan talks before 2020, and which counts France as one of its three co-chairs.

“Azerbaijan showed goodwill nonetheless and allowed the French president to participate in this meeting,” Aliyev said at an October 14 post-Soviet summit meeting in Astana. “Despite the goodwill shown by Azerbaijan, just a week after the meeting in Prague, the president of France made insulting, unacceptable, false and provocative statements.”

He went on, complaining that “another anti-Azerbaijan resolution is being prepared” in the French Senate, and blaming Macron personally for what he described as an anti-Azerbaijani turn in Paris.

“I had the opportunity to communicate quite closely with President [Jacques] Chirac, President [Nicolas] Sarkozy and President [Francois] Hollande, and our relations were quite balanced, quite friendly,” he said. “We always perceived the activities of previous French presidents, despite, of course, a certain factor of the Armenian diaspora in France, as balanced. However, the current French leadership has effectively crossed out all this.”

Azerbaijan’s Foreign Affairs Ministry also responded to Macron’s interview, saying in a statement that the “views expressed by the French president against Azerbaijan seriously question the neutrality and impartiality of his mediation efforts.” Azerbaijani MP Siyavush Novruzov proposed cutting diplomatic ties with France.

But bringing in the kids brought the spat to a new level.

“At the very center of Paris,” Aliyev sings.
“In fluent French
Someone talks nonsense
As if he is drunk…
Say - who is that person?”

Response to the video was mixed. “This should be translated into French,” one suggested. “It is not right to use children as political tools. It's so sad that public television did this,” another commented.

Meanwhile, Azerbaijan appointed a new ambassador to France: Leyla Abdullayeva, who had been the press secretary of the Foreign Ministry.

"Will do my utmost to justify this high confidence and contribute to the development of Azerbaijan-France relations between Azerbaijan and France," she wrote on Twitter.