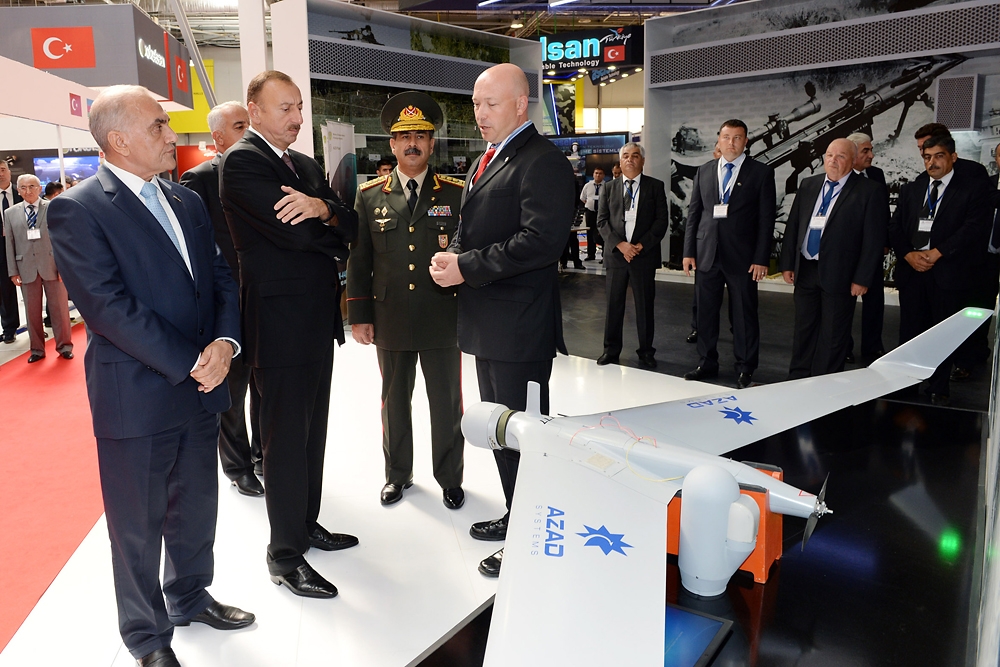 The strategy comes via two approaches: first, a build-up in Azerbaijani-made military equipment, including drones co-produced with Israel; and, second, a new defense troika with longtime strategic partners Turkey, a member of the North Atlantic Treaty Organization, and neighboring Georgia, a NATO-member-hopeful.

Nor is this a strategy just left to paper. On September 11, Azerbaijani Defense Minister Yaver Jamalov announced to reporters that Azerbaijan plans to export 100 drones, co-produced at a local Azerbaijani-Israeli plant, to “one of the NATO countries.” The remarks headlined the country’s first international defense-industry show, ADEX-2014, held on September 11-13 in the Azerbaijani capital, Baku.

Jamalov did not specify the country or the terms of the sale, but the prospect of the deal reinforces the fact, long clear in foreign policy, that Baku sees itself as a regional military force that need no longer pay dalliance to the likes or dislikes of Russia.

As it looks on the plans for a trade union with Azerbaijani enemy Armenia, Baku increasingly feels that Moscow’s interests in resolving the 26-year-long Karabakh conflict are more closely aligned with those of Armenia, where Russia already has troops stationed.

By focusing its attention on its own military-production capabilities or on military partnerships with other countries, “the Azerbaijani government wanted to balance the pro-Armenian position of Moscow,” Isazade said.

Elhan Shahinoglu, head of the non-profit Atlas Research Center in Baku, agreed. “I think that after the last meeting of the Azerbaijani, Armenian and Russian presidents in Sochi [in August], [Azerbaijani President] Ilham Aliyev has lost any hope that Moscow is going to play a positive role in the Karabakh conflict’s resolution,” he commented.

The Kremlin’s support for pro-Russian separatists in eastern Ukraine and intervention in the conflict there does little to reassure Baku on this point.

Azerbaijan’s President Ilham Aliyev has not specifically addressed such misgivings, but, in his opening remarks at ADEX-2014, commented that “in the current world, countries have to keep facing new security challenges, which make cooperation and the exchange of modern military technologies more important.”

Azerbaijan is due to receive 100 Russian-made T-90C tanks in early 2015, but the shipment is based on a 2010 contract, Trend news agency reported, citing an adviser to Russia’s state-owned weapons-export company, Rosobornexport. Azerbaijan has not announced any more such contracts.

Defense Minister Jamalov claims that Azerbaijan expects by the end of 2015 to be able to meet almost all of its own needs for ammunition and tank and artillery shells, formerly mostly supplied by Russia, Belarus and Ukraine.

Israel, which imports most of its natural gas from Azerbaijan, appears to play a leading role in Azerbaijan’s makeover into a materiel-manufacturer. Israeli Defense Minister Moshe Yaalon visited Azerbaijan for the first time this month to meet President Aliyev and attend ADEX-2014.

At the exhibition, Azerbaijan presented models of two drones produced in conjunction with an unnamed Israeli company – one for reconnaissance ( “Aerostar”) and one for combat-missions ( “Orbiter 2M”).

Overall, 200 companies from 34 countries, including the United States and Russia, took part in the event, which featured products ranging from armored troop carriers to sniper guns.

Only one contract with an Azerbaijani company was signed during the show, however, an Azerbaijani defense-industry representative commented to EurasiaNet.org.

South Africa’s Paramount Group, a privately owned defense company which claims to be the largest in Africa, plans to create a joint venture with Azerbaijan’s private AirTechService to work on upgrades to military helicopters and some jets.

The defense industry representative, who asked not to be named, noted, however, that other countries expected to take an interest in Azerbaijani materiel include Arab Persian-Gulf states, and, in Central Asia, Kazakhstan and Uzbekistan.

NATO member states Estonia, Bulgaria, Lativa, Lithuania, Poland and Romania, all of which have indicated they will increase defense spending in response to the Ukrainian-Russian conflict, also feature among the sales-targets, the representative said.

But weapons manufacturing alone does not provide Azerbaijan with a sense of security.

Like other former Soviet republics, Azerbaijan, with one eye on the Karabakh flare-up and another on the Ukrainian civil war, is trying to find new ways to protect itself from Russian pressure, noted Shahinoglu.

On August 19, Defense Minister Hasanov met with Georgian Defense Minister Irakli Alasania and Turkish Defense Minister Ismet Yilmaz in the exclave of Nakhchivan, President Aliyev’s ancestral home, to address the “military-political situation in the region,” as the government-friendly AzerNews put it.

After the meeting, Georgian Defense Minister Alasania, the most publicly talkative of the three, said the trio plans to defend collectively regional pipelines and railroads – strategic projects in which all three already cooperate – in case of military aggression in any of the three countries.

Joint military exercises also will be held, although the 30,000-troop exercises currently underway in Azerbaijan only include Azerbaijani forces.

While one Russian security analyst has questioned the pact’s significance since Turkey and Azerbaijan already are military allies, defense expert Isazade countered that Turkey’s presence will constrain Moscow in its treatment of Georgia and Azerbaijan, and reassure the international community that energy resources will be protected.

“If there would be just an alliance of Baku and Tbilisi, Moscow would not care,” he elaborated. “But Turkey, which is a NATO member and also has wide links and cooperation with Russia, is an important factor of stability for the region.”

So far, no official response has come from Moscow.