Azerbaijan: Putting Inauguration Ahead of the Vote 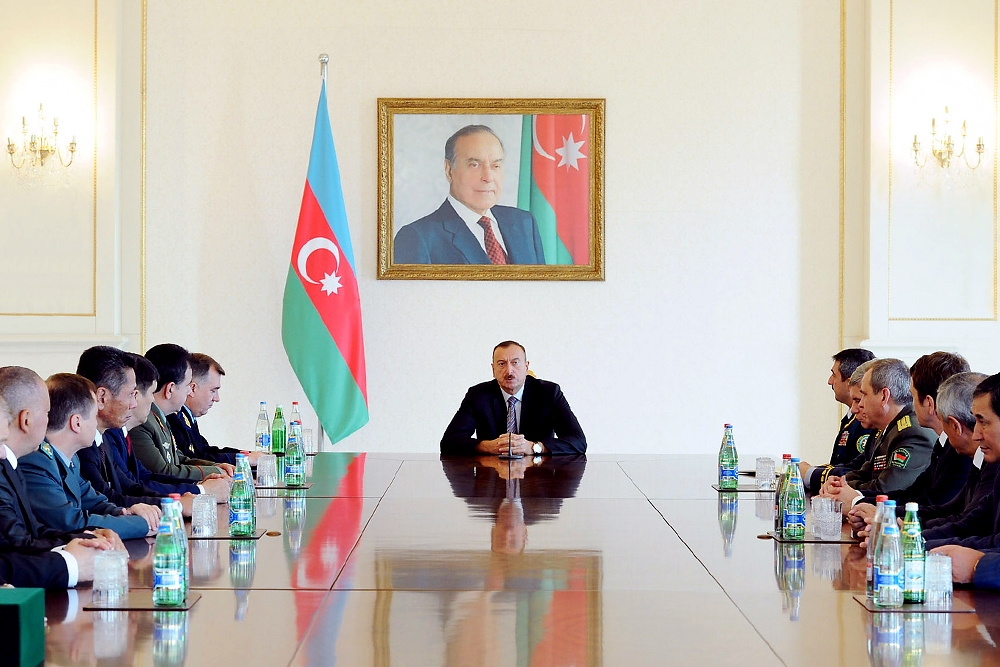 Sitting under a portrait of his father and the former first president of a post-Soviet Azerbaijan, President Ilham Aliyev speaks during a meeting of the CIS Council of Border Troops Commanders in early September 2013. Aliyev, who has already served as president for 10 years, is expected to easily win his third term in the presidential election tomorrow. (Photo: Azerbaijani Presidential Press Service)

A man who declined to campaign in the weeks before Azerbaijan’s presidential election on October 9 is already gearing up for his inauguration ceremony.

That man, of course, is Ilham Aliyev, who, already after two terms and 10 years in power, is the longest-serving ruler in the South Caucasus. While there are 10 candidates contesting the October 9 election, most voters know in advance that Aliyev is going to win – and it will not even be close.

Critics scoff that the lack of a genuine choice illustrates the country’s lack of democratization progress. “Overall, the campaign took place under a predetermined result; i.e. the inevitability of Aliyev’s victory,” said political strategist and blogger Bakhtiyar Hajiyev.

Such jabs, however, do not appear to trouble top government officials: even before the polls open, preparations are well underway for Aliyev’s third presidential inauguration.

Speaking on condition of anonymity, an employee at one of Baku’s largest florists told EurasiaNet.org that the government prepaid for flowers for an inauguration ceremony at the Heydar Aliyev Center, a facility in downtown Baku named in honor of Ilham Aliyev’s father, the late President Heydar Aliyev, and not a venue likely to be the choice for any opposition candidate’s inauguration.

That officials are looking past the election is not really that surprising, given that representatives of the pro-presidential Yeni Azerbaijan Party (YAP) announced early on during the campaign cycle that Aliyev would not run a formal campaign because “he doesn’t need it.”

The 51-year-old Aliyev has not taken part in any televised debates (delegating the task instead to senior YAP members), has not traveled outside of Baku to meet with voters and has not held a single campaign rally. He has not even made a campaign promise.
Relying on a slogan, “Davam,” or “Continue” in English, Aliyev’s PR machine has stressed the economic boom that Azerbaijan has experienced during his decade in power. True to this motto, the president at an October 7 cabinet meeting spoke about his administration’s regional development plans for 2014 as a fait accompli.

Elhan Shahinoglu, head of the Atlas Research Center, a Baku think-tank, said that in a genuinely “democratic country, such behavior would be considered disrespectful to voters, but, in Azerbaijan, it will go unnoticed.”

A random survey of 20 people in downtown Baku largely confirmed that perception; most expressed support for President Aliyev, who, in the words of a shoe-cleaner, Fuad, is seen as having “brought success to Azerbaijan.” Many others appeared afraid to talk, scurrying away when they saw a microphone.

Having stumped in the regions and staged three rallies in Baku, the 61-year-old Hasanli has run perhaps the most active campaign, built around the slogan “Enough.” He accuses Aliyev of “ruling the country like his personal business holding” and routinely violating human rights.

Some of those surveyed by EurasiaNet.org like Hasanli as “a different face.” And unlike the president, Hasanli has a long list of promises: the unconditional release of all political prisoners; measures to protect property rights and to guarantee independence of the courts; and promotion of freedom of religion, including the permission for observant Muslim women to wear hijab where desired.

He has made a few populist-sounding pitches, too: state subsidies for agriculture and the government payback of small-scale personal loans; a two-fold decrease in utility prices and a two- to three-fold increase in pensions and salaries for teachers and doctors.

But hindered by a brief, 22-day-long official campaign period and limited finances for opposition candidates, Hasanli’s message has not had the time or means to resonate widely. Turnout at Hasanli’s campaign events, sometimes hampered by police interference, has not been above several thousand people.

The only other candidate to run a relatively active campaign, Igbal Agazade, has been cautious in criticizing the government and has never made a direct accusation against President Aliyev. Offering eight different programs for people ranging from pensioners to the unemployed, he opted for the campaign slogan “Change Your Life.”

Voters increasingly do not appear to think that they can, in fact, change their lives by heading to the polls, commented Shahinoglu. “People’s belief in the possibility of changes via elections has seriously declined due to regular falsifications in the past,” he said. “Political apathy is widespread and people care [more] about their daily needs.”

While running an outspoken candidate, the National Council remains weak and handicapped by internal divisions over their choice of candidate and strategy, he added. “Therefore, even the so-called protest electorate is reluctant to support it.”

Monitors from the Organization for Security and Cooperation in Europe’s Office for Democratic Institutions and Human Rights have criticized the overall campaign, which ended on October 8, for “a lack of thorough debate” and campaign platforms, and for the state-controlled media’s heavy coverage of President Aliyev in comparison with other candidates.

Opposition activists and journalists have come in for a disproportionate share of police attention, ranging from the arrests and beatings of National Council activists to charges of alleged drug trafficking against one opposition journalist, Parviz Hashimli.

YAP representatives assert that the government has created a “free atmosphere and all the necessary conditions for candidates’ campaign activities.”

But some voters who have already decided to stay away from the polls are not buying it. “They get elected by themselves,” scoffed Baku high-school math teacher Khafiz Mustafayev in reference to the government. “That’s it.”