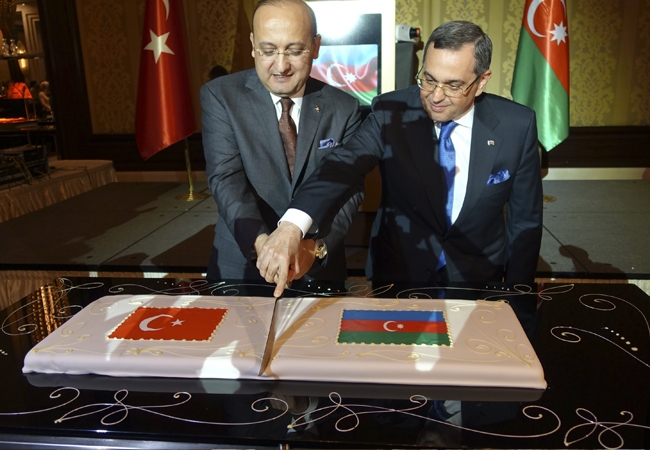 Turkey has gone through a rough foreign policy patch over the past few years, feuding variously with the United States, Europe, Russia, and much of the Arab world. So is its only remaining friend Azerbaijan?

That seems to be the conclusion of a new survey, the annual Public Perceptions on Turkish Foreign Policy report by Kadir Has University in Istanbul. To the question, "Which country is Turkey's closest 'friend,'" fully 71 percent of Turks said Azerbaijan. In a distant second place was Pakistan, with a mere two percent.

Azerbaijan's friend rating has been rising steadily since the poll began: from 28 percent in 2013, to 37 percent in 2015, to 59 percent in 2016. That was mirrored in the results to another question, "With which countries Turkey should cooperate in implementing its foreign policy?" Azerbaijan also held the top spot there, with 59 percent, and also has been steadily improving since 2013, when only 12 percent said that. A related answer, "Turkic countries," was the second most common response, at 37 percent, a number that also has been rising significantly since 2013. ("Muslim countries" was third at 22 percent.)

There also were some Eurasian sympathies displayed in the answers to the question, about what could be a strategic alternative to European Union membership. The top answer was "strategic cooperation with Russia," at 28 percent, also steadily growing since 2013. In third place (behind the Organization of the Islamic Conference) was the Shanghai Cooperation Organization, and in fourth was that Turkey "should establish a Turkic Union."

No other Eurasian country besides Azerbaijan figured prominently in the friend ratings, but several do appear in the "Which country or countries pose a threat to Turkey?" section. Russia is the fourth-most common answer, with 19 percent of Turks perceiving it as a threat, and Armenia is right behind at 18 percent.

So is Azerbaijan really getting that popular in Turkey? There has long been rhetoric of "one nation, two states," as the two countries speak similar languages and see one another as brotherly partners. There is large-scale economic cooperation, particularly on oil and gas, and Turks sympathize with and back Azerbaijan in its conflict with Armenia over Nagorno Karabakh. But that has existed for a long time; what's changed since 2013?

A couple of Turkey's top Caucasus experts say there is some validity to Azerbaijan's recent rise, if only by process of elimination.

"The main reason is most probably Turkey's worsening relations with both the EU and U.S.," said Mitat Çelikpala, dean of the Faculty of Economics, Administrative and Social Sciences at Kadir Has. "Russia is not a promising and trustful partner as well. Arabs are traditionally out of the list and we lost our connection with Pakistan and other Central Asians as well. Thus Azerbaijan remains as the sole “one nation two states” in the list."

Çelikpala pointed to some concrete things Azerbaijan has done, notably coming quickly to the defense of Turkish President Recep Tayyip Erdoğan after last year's coup attempt, and Baku's vigorous efforts against the organization of Fethullah Gülen, whom Erdoğan blames for the coup.

The sharp domestic polarization in the country and resulting "conspiratorial inclinations" also contributes to Azerbaijan's rise, he added. "People do not trust each other and are taking positions against each other. Many of them believe that this hostile or poisonous environment is created by outside powers. 'Lone wolf syndrome' as a result leaves the only friendly position to Azerbaijan."

Another analyst, Göktürk Tüysüzoğlu, a professor at the Giresun University Department of International Relations, concurred. "The tension between Turkey's Western partners and the tremendous apprehension of mutual trust is the most important reason" for Azerbaijan's elevation, he said.

He also pointed to the growing paranoia in Turkish political culture. "This understanding, which can be expressed as 'a Turk has no other friend than a Turk,' naturally brought Azerbaijan to the forefront," he said.