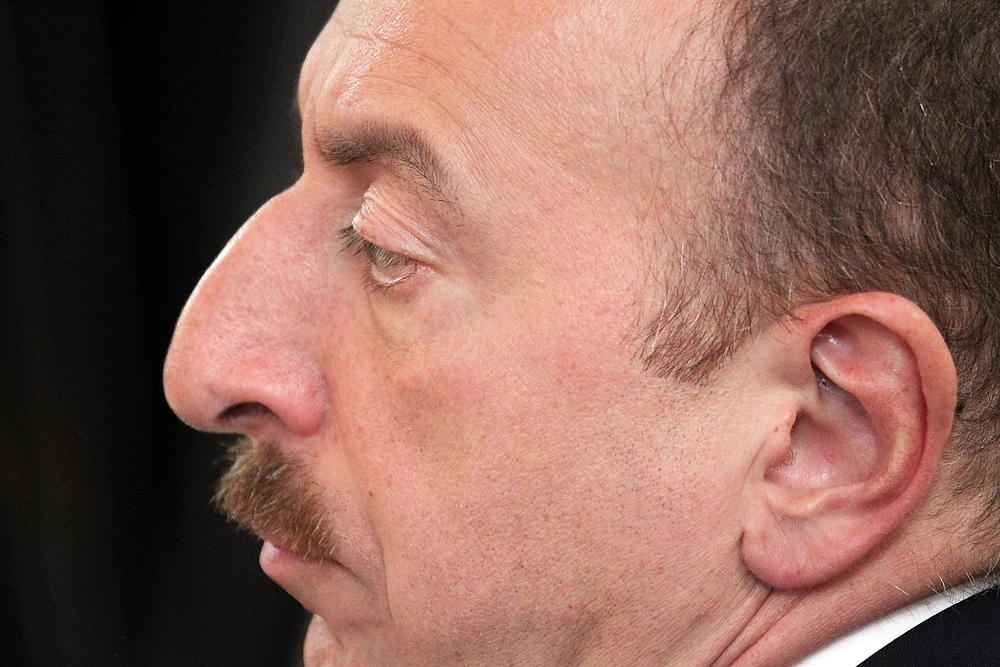 On his way to a third term. (Photo: Sasha Mordovets/Getty Images)

The only unanswered question heading into Azerbaijan’s presidential election October 9 was whether it would be perceived as the country’s first-ever “free-and-fair” vote. The suspense didn’t last long, as a torrent of reports about irregularities began pouring in long before polling stations closed.

Following what could only be described as a low-energy election campaign, President Ilham Aliyev was universally expected to cruise to a third term in the October 9 voting. But more than just victory, members of Aliyev’s team were hoping to secure a sense of legitimacy in the election. Given the administration’s desire to raise its profile on the international stage, securing such an outcome was seen as important for the government.

Authorities took steps to heighten confidence. For example, webcams were installed in about 20 percent of all polling stations. Meanwhile, pro-government news websites provided coverage of official plans for increased spending on infrastructure and forecasts for an economic growth rate of over 5 percent.

But before the sun had even risen on Election Day, reports of vote rigging and other funny business were circulating.

Hours prior to the closing of the polls, Jamil Hasanli, the leading opposition presidential contender who is backed by the National Council of Democratic Forces (NCDF), started assailing the election as “not legitimate,” citing “a huge number of facts regarding massive and open falsifications all over the country."

"Once again the authorities showed disrespect to their own people," Hasanli said in a statement distributed to journalists. "I will use all LEGAL means to defend votes of the people."

The election’s first scandal actually broke late in the evening of October 8, when the online, pro-opposition Meydan TV reported that the Central Election Commission’s mobile-phone app had posted data for the election results even before voting had begun.

The tally, later corrected to zero, showed President Aliyev with 72.76 percent of the vote, and Hasanli with a mere 7.4 percent.

The CEC’s spokesperson, Azer Sariyev, insisted to EurasiaNet.org that election officials had had nothing to do with the data, and called its appearance “a gross violation” of election law. The application’s developer, digital marketing agency Happy Baku, “will be punished,” he said.
The developer should have connected the app “to the CEC system only after 7pm today,” he said. “They did not have access to our system yesterday. I don’t know where they took these results.”

For an election in which all 10 candidates had Facebook pages and websites, it was, perhaps, a fitting digital glitch. Yet analog-age problems, ranging from rampant carousel voting to ballot-box stuffing and intimidation, also were not lacking.

One Baku high-school history teacher told EurasiaNet.org that her school’s principal had required teachers to vote in several polling stations throughout the day. The story parallels independent monitors’ allegations about such practices by public employees elsewhere.

“She gave us the names of concrete people, members of precinct commissions, whom we have to approach at each polling station,” the teacher, who requested anonymity, recounted. “These people know those registered voters who are not in Baku and will not vote, so we will sign and receive ballots instead of them.”

“Of course, we have to vote for Aliyev,” she added. A desire to prevent the principal from being “in trouble” motivated her decision, she said.

According to the pro-opposition Turan news agency, senior NCDF member Eldar Namazov and the wife of presidential candidate Sardar Mammadov were among those who found that someone had voted in their places.

“Falsifications are massive,” Namazov stated. “If in the past, the fraud was beginning closer to the end of the elections, this time they have started from the very beginning.”

One video posted on Facebook by the independent Election Monitoring Center showed a man openly stuffing at least 50 ballots into a ballot box in a polling station in the western region of Shamkir.

Voting with absentee ballots also appeared to be a regular occurrence, as observed by EurasiaNet.org in several Baku polling stations.

Widespread apathy toward the election was evident during the campaign. But Central Election Commission representatives reported a robust turnout figure of 72 percent.

At polling station, a monitor for the opposition Musavat Party claimed that a 65-person difference existed between his count of the number of voters and the official tally. He cited a group of students from the nearby State Pedagogical University who allegedly had expressed dismay over their dean’s likely reaction if they did not have enough absentee ballots to vote.

Violence, too, was part of the electoral mix. RFE/RL’s Azeri-language service reported that one NCDF representative, Fizuli Gahramalni, was hospitalized after an alleged beating by polling-station officials in the southern region of Beylagan. The NCDF itself claimed that some of its monitors were kept out of polling stations.

“Unfortunately, many government officials are taking an active part in falsifications and, thus, becoming part of a grave crime -- the usurpation of power,” Hasanli complained to reporters after voting in Baku’s Yasamal District.

The CEC’s Sariyev told EurasiaNet.org in the morning that he did “not have information about any serious violations.”

Meanwhile, representatives of the president’s Yeni Azerbaijan Party, citing their own monitors, claimed that Hasanli’s representatives were trying to disrupt the vote and “create the impression that the elections are falsified.”

After voting in a Baku school, President Aliyev and his wife, Mehriban, did not make any comments to assembled journalists.

Despite the reported irregularities, the atmosphere in the Azerbaijani capital, was quiet throughout the day. Turnout appeared higher in the outskirts, with lines of people forming outside polling stations to cast ballots.

Some analysts suggested that the unusually high turnout – about 18 percent of the electorate had voted within two hours after polls opened at 8am -- was intended to complement a similarly high return for President Aliyev.

The pro-governmental Prognoz center published exit-poll results showing Aliyev with almost 84 percent of the vote and Hasanli, his closest challenger receiving just over 8 percent. NDCF representatives have already stated that they do not recognize any exit-poll results.

Even before the presidential election results were finalized, some Baku-based political analysts were thinking about the scheduled parliamentary elections in 2015, and whether Aliyev will be able to maintain his iron grip on Azerbaijan’s political process.