The move appears part of a trend toward appointing economically minded and technocratic figures to high offices. 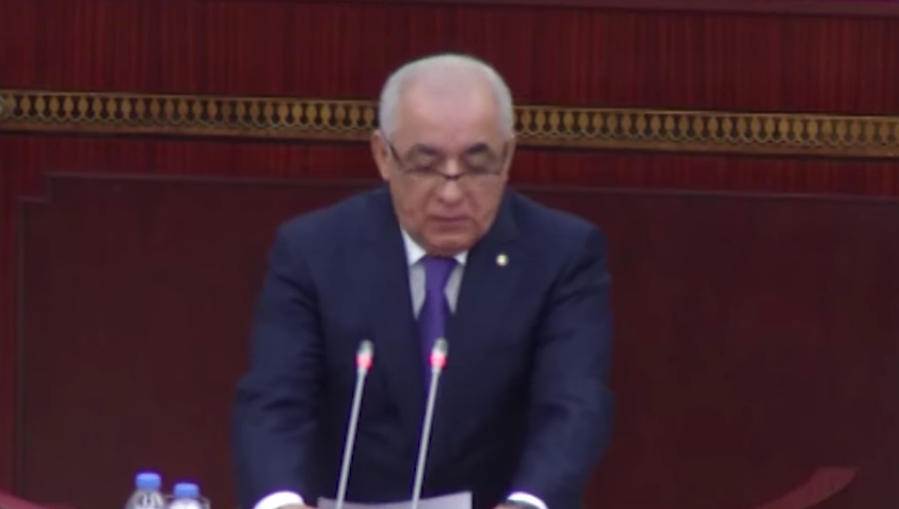 Screenshot of Ali Asadov addressing Azerbaijan's parliament after being confirmed as the country's new prime minister.

Azerbaijan has appointed a new prime minister, as the leadership continues to promote economists and technocrats in an effort to revive its long-sputtering economy.

The transition took Azerbaijanis by surprise but nevertheless happened quickly and seamlessly: On the morning of October 8 it was announced that the current PM, Novruz Mammadov, would be stepping down and that President Ilham Aliyev had nominated his adviser on economic affairs, Ali Asadov, to replace him. And it was barely past noon in Baku when parliament unanimously confirmed Asadov.

The premiership is a largely toothless position in Azerbaijan, and little was heard from Mammadov since he was appointed 18 months ago. An article in the government-friendly news website Haqqin, published immediately after his resignation, argued that Mammadov had failed to make progress jumpstarting the economy.

Mammadov “did not manage the tasks put before him,” wrote Haqqin’s chief editor, Eynula Fatullayev. “The prime minister wasn’t able in a year and a half to reorganize the government’s work and to increase its effectiveness, to turn the cabinet of ministers into a locomotive of the economic reforms initiated by the president. Economic and financial reforms ground to a halt and required the president’s constant personal intervention. Without the president nothing happened. Moreover, Mammadov did not manage to improve macroeconomic indicators, in particular gross domestic product, which the president had repeatedly demanded.”

Asadov is an economist by profession, in contrast to Mammdov, whose experience was more oriented toward foreign policy. “A generational change in the executive power vertical is taking place before our eyes,” Fatullayev continued. “The changes will continue. The president has tied the transformation of the economy to personnel changes, as personnel are not responsible only for the success of reforms, personnel decide everything!”

While Asadov hardly represents a generational change himself – he is 62 – his appointment nevertheless seems to be consistent with a recent trend toward appointing younger, economically and technocratic-minded figures to senior positions. Many of the new appointees also are members of what is known in Azerbaijan as the “Pashayev clan,” connected to the family of Aliyev’s wife and First Vice President Mehriban Aliyeva. While Asadov isn’t a well-known member of that clan, a well-informed source in Baku told Eurasianet that he is connected with the family.

In his first address to parliament after being confirmed, Asadov himself put the emphasis on the economy.

“Under the leadership of president Ilham Aliyev, Azerbaijan’s economy has seen titanic developments,” he said. “Global projects have been implemented. The non-oil sector is developing. Azerbaijan entered into the family of space nations.”