The handover was confused, as the current Armenian residents got multiple mixed messages over whether they could stay. 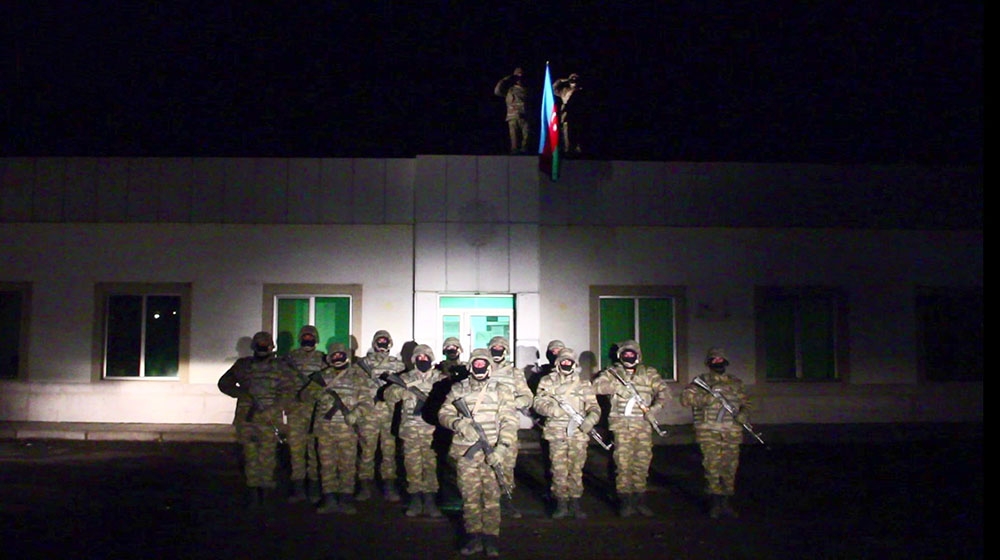 Azerbaijani troops pose in the Lachin region shortly after entering after midnight on December 1. (photo: Ministry of Defense, Azerbaijan)

With the handover of the district of Lachin, Azerbaijan has now taken control over all the territory it regained in the ceasefire agreement signed with Armenia and Russia on November 10.

Azerbaijani forces entered Lachin after midnight on December 1. The Ministry of Defense released video of a group of soldiers standing, while it was still dark, in front of an administrative building with the Azerbaijani flag raised above it.

Lachin was the last territory to be handed over as a result of the ceasefire deal, following the cession of Aghdam on November 20 and Kelbajar on November 25. In the war that preceded the deal, Azerbaijan had already taken control of the four other territories that Armenian forces had occupied – Fuzuli, Jabrayil, Zangilan, and Gubadli – as well as a part of Nagorno-Karabakh.

Lachin also was the territory that had been most heavily settled by Armenians following their victory in the first war, in the 1990s, and by this year had a population of about 10,000. It also includes the “Lachin corridor,” the only road now connecting Armenia to the remaining Armenian-controlled parts of Karabakh. According to the November 10 agreement, a five-kilometer-wide Lachin corridor will remain and will be controlled by Russian peacekeepers.

Ambiguity about that corridor, its precise parameters and sovereignty, contributed to a great deal of confusion ahead of the handover, and residents repeatedly got mixed messages over whether their homes were going to be ceded to Azerbaijan.

On November 26, local authorities told residents of the town of Lachin, through which the road passes, that they would have to leave by December 1, but then the next day they were saying the opposite.

In the end, the large majority of residents appear to have left, but some – in Lachin (which Armenians call Berdzor) and two other villages, Sus and Aghavno – remain. “These three settlements are controlled by [Russian] peacekeepers, but the corridor is still located in the Kashatagh region [the Armenian name for Lachin], which was handed over to the Azerbaijanis,” said the head of the Kashatagh administration, Mushegh Alaverdyan, in a December 1 interview with the news website Caucasian Knot. “I don’t know how to interpret that, I can only say that as of today I remain head of the administration, and the Russian peacekeepers control the corridor.”

The mayor of Lachin told local media on December 1 that Russian peacekeepers had said that there shouldn’t be any flags flying in the town, and so local authorities had taken down the flag of the unrecognized Nagorno Karabakh Republic. The major, Narek Aleksanyan, also said that there were no Azerbaijani troops in the town. (It was unclear where the Azerbaijani soldiers carried out their photo op with their flag.) Aleksanyan also said there were at least 200 residents who remained in the town.

In the medium-term, the fate of Lachin is even murkier.

Azerbaijan intends to build a new road that will skirt the city of Lachin so that the city can be again controlled by Azerbaijan and its former residents can return, said President Ilham Aliyev in a December 1 address.

Aliyev said that when Armenians captured the region, it had been home to a little more than 50,000. “Now, the population of the Lachin region has reached 80,000,” he said, apparently factoring in the growth of families displaced from the region. “Of course, one of our primary goals will be the return of the people from Lachin to Lachin,” he said.

According to one international estimate shared with Eurasianet on condition of anonymity, the territories over which Azerbaijanis have regained control had been home to about 34,000 Armenians. The human rights ombudsman of Karabakh, Artak Beglaryan, said that about 40,000 people had been made homeless as a result of the war.