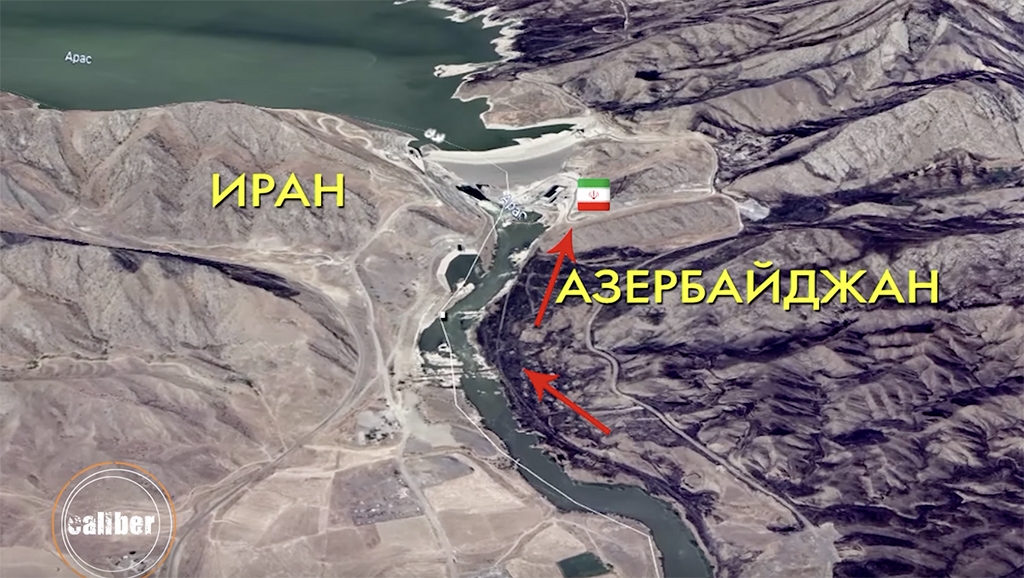 Screenshot of a video reconstructing an alleged 2020 Iranian incursion into Azerbaijani territory.

Azerbaijan is stepping up its rhetorical counteroffensive against Iran, airing a seemingly orchestrated series of allegations of treachery on the part of Tehran.

In recent days Azerbaijani officials and semi-official sources have accused Iran’s armed forces of briefly invading southern Azerbaijan during last year’s war with Armenia, its clerics of running a network of secret agents in Azerbaijan, and its banks of using financial institutions in Karabakh to launder billions of dollars.

The campaign appears to be a shift in tactics from Azerbaijan, which had previously been more on the defensive as Iran carried out unprecedented war games on the border between the two countries. The apparently unprovoked military exercises were accompanied by a series of harsh criticisms of Azerbaijan from Iranian officials, most of all concentrated on Azerbaijan’s close relationship with Iran’s archenemy, Israel.

The increasing attacks from Baku come as the anti-Azerbaijan rhetoric from Iranian officials seems to have quieted somewhat. Baku isn’t letting the spat go, however. While its initial response was to defensively bat back the Iranian allegations, more recently it has regained its footing and is not shying away from the fight.

“In recent days a lot of facts about Iran have been pouring out. It’s interesting, why exactly now?” wrote one commentator, Maksud Salimov, on the website minval.az. “It’s unlikely we would have heard about all this without the current heightened tensions with Iran. In any case, it is Tehran who has to bring clarity to these questions.”

Iran has traditionally stayed neutral in (and relatively distant from) the conflict between Armenia and Azerbaijan. But as tensions have risen, the narrative in Azerbaijan has shifted toward portraying Iran as purely and actively pro-Armenian.

The biggest splash in Azerbaijan’s new campaign was a video report released over the weekend by the government-linked military news website Caliber.az. The report claimed that Iranian armed forces had briefly crossed the Azerbaijani border during last year’s war with Armenia, sparking a military and diplomatic crisis that was kept under wraps at the time. “Now that everyone’s mask is off, there is no longer any reason to conceal the historic treachery of Iran,” the narrator of the video said.

According to the report, which cited no sources, as Azerbaijan forces were advancing westward toward Zangilan along the Aras River, which forms the border with Iran, they ran into an Iranian unit that had crossed the border and blocked the road.

The Iranian field commanders said they were there to safeguard a strategic dam at Khudaferin. Azerbaijani commanders on the ground were unable to resolve the situation and retreated to another town, Soltanli, 14 kilometers away “to avoid the risk of clashes with Iranian forces and the opening of a second front.”

Meanwhile, in Baku the Azerbaijani foreign ministry was issuing a demarche to Tehran. “Baku threatened to make public the treachery of Iran to the general public, which would inevitably result in a reaction by millions of Azerbaijanis – on both sides of the border,” the narrator said. This was a reference to Iran’s large ethnic Azerbaijani minority, which is concentrated in this border area and is a constant source of tension between the two states.

Such a public appeal to Iran’s ethnic Azerbaijanis would be an extraordinarily escalatory step by Baku, as it would likely be seen in Tehran as an existential threat to its own territorial integrity.

But the report made repeated references to the idea that Iranian Azerbaijanis could act as a fifth column against Tehran. It claimed that Iranian intelligence units were monitoring Azerbaijani troop movements across the river and allegedly passing on the intel to the Armenians, “But we also can’t ignore the fact that the ordinary people of Iran were on Azerbaijan’s side,” it said, to images of people apparently cheering for Azerbaijan on the Iranian side of the border.

Even if the description in the luridly narrated video is taken at face value, the episode was relatively minor and was resolved within a day with the help of Iran’s military attache to Baku. Nevertheless, the narrator said: “Iran won that day from Azerbaijan, a day that Azerbaijan lost valuable time” and allowed Armenians to regroup. “Who knows how many of our boys would be alive today” if not for the incursion.

The video was widely spread around Azerbaijani social networks, and fed an already growing anti-Iranian sentiment. There has been no official comment on the allegations, but member of parliament Fazil Mustafa said on October 12 that Azerbaijan should sue Iran in international court over the incident.

Other new allegations have surfaced as well.

Yet another member of parliament, Javid Osmanov, accused Nejat Ojag, the Baku representative of Iran’s supreme leader, Ayatollah Ali Khamenei, of running a “network of agents” in Azerbaijan. The Azerbaijani authorities had closed down Ojag’s office a week before, though it had then cited a high rate of COVID infections as the reason.

“Azerbaijan is unmasking the vandalism and destructive mission of Iran on the historic lands of Azerbaijan,” Osmanov told the news website Report.

This all has continued while the volume of attacks from Iran – which had gone on steadily for several days, with multiple Iranian officials making statements every day – has noticeably quieted, if not disappeared altogether. And there has been no recent news about the most aggressive move from Iran: the military exercises on Azerbaijan's border, which kicked off October 1. It is not clear if they are still going on.

In an October 11 interview with Lebanese television, Iranian Foreign Minister Hossein Amir-Abdollahian repeated Tehran’s by now rote complaints against Azerbaijan, focusing on Israel as well as the alleged presence of “Takfiri terrorists,” an apparent reference to the Syrian mercenaries that Azerbaijan hired in last year’s war. “We told Azerbaijan that the presence of the Zionist regime in the country will not be conducive to regional peace,” Abdollahian said.

Official Baku has for the most part evaded any discussion of its alliance with Israel, instead placing the focus on its ties with Turkey – also an irritant to Tehran, though perhaps not as serious, and one much surer to rally domestic public support.

The coterie of regional analysts who have recently, suddenly, and vigorously taken up Azerbaijan’s cause in the world media, however, have been less shy. In a recent analysis for National Interest, Taras Kuzio argued that “The Azerbaijani minority in Iran is an important source of human intelligence for Israel.”

Michael Doran, in the Wall Street Journal, worded things a little more carefully: “Whether Israel is truly receiving direct assistance [from Azerbaijan] for its covert operations is anyone’s guess. Whatever the case may be, the Israelis clearly recognize that the rise of Azerbaijan is knocking the Islamic Republic off balance.”

And many fans of the Azerbaijan-Israel relationship were cheered by an October 9 tweet from Azerbaijan’s embassy in Tehran. It celebrated the one-year anniversary of Azerbaijan’s retaking of the Karabakh city of Hadrut, and featured a photo of an Azerbaijani soldier with a rifle strapped over his chest. Social media users quickly identified the rifle as an Israel-made TAR-21.