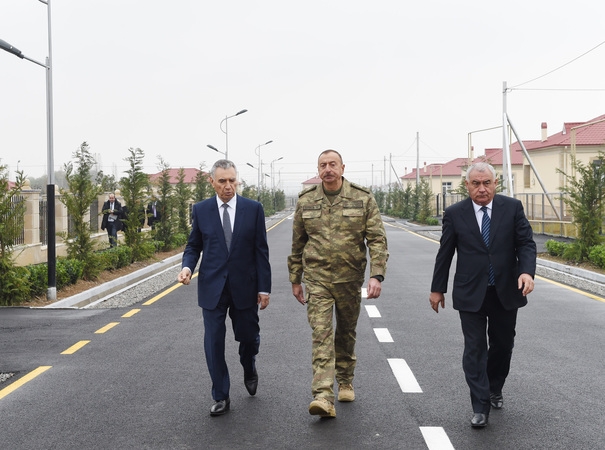 Azerbaijani Deputy Prime Minister, chair of the State Committee for Refugees and IDPs Ali Hasanov (left) with President Ilham Aliyev on a visit to an IDP settlement. Hasanov's grandson was arrested in the latest in a string of traffic incidents involving elite youth. (photo: president.az)

A string of fatal car crashes involving the powerful and politically connected have sparked public outrage in Azerbaijan.

The latest incident came on August 3, when two men were killed and two more injured in a collision caused by Nail Elman oglu Allahverdiyey. The 23-year-old is the grandson of Deputy Prime Minister Ali Hasanov and son-in-law of State Border Service chief Elcin Quliyev.

A Baku city court ordered Allahverdiyev to be detained for four months. “Regardless of their role in the government, an official who ignores the instructions of the president and shows public disrespect for society must bear the heaviest punishment in accordance with the law,” the Interior Minister and Prosecutor General’s office announced in an August 7 joint statement.

On August 7, a Baku court also ordered the arrest of Mirmahammad Ismayilov, another elite youth and the driver of a car that Allahverdiyev was racing along Baku's streets when the accident took place.

Ismayilov is the son of Major Alovsat Ismayilov, the former deputy head of the State Traffic Department of Baku’s Nasimi district. The Ismayilovs are related to Kamal Heydarov, one of the most powerful people in Azerbaijan.
The collision caused by Allahverdiyev and Ismayilov is the latest in a series of crashes involving relatives of state officials.

On July 12, Rustam Orujev — son of Novruzali Orujev, the former deputy head of Azerbaijan’s State Service for the Mobilization and Conscription of Citizens for Military Service — was arrested for reckless driving. A week earlier, the younger Orujev had gotten behind the wheel of a BMW without a license, violated unspecified traffic rules, and physically assaulted a local bus driver.

The senior Orujev was fired as a result, and offered a self-abasing apology: “May Allah protect the president. I repeat once more, that I am ready to sacrifice my life and the life of my children to the president.”

It wasn’t young Orujov’s first run-in with the law. He also lost his license in 2014 after a road accident and was sentenced to four years in prison. In 2016, he was released ahead of schedule.

Traffic incidents like these may seem mundane, but they have previously led to social unrest in Azerbaijan. In January 2013, mass riots shook the town of Ismailli, 200 kilometers northwest of the capital, after local governor Nazim Alekperov’s son drove his car into an electricity pole while drunk.

Amid calls for his resignation, Alekperov dismissed the protest. “Such incidents spoil the image of our region, which is becoming an attractive tourist destination,” he said.

Activists on social media hotly debated the latest incident, speculating whether Allahverdiyev will be punished for his role in the fatal accident. Netizens also discussed the affect the incident will have on the careers of Allahverdiyev’s powerful relatives.

“Nail Allahverdiyev, who caused the traffic incident, is the grandson of Ali Hasanov…and a son-in-law of the Border Service’s Elcin Quliyev,” one user wrote on the HamamTimes Facebook page on August 7. “Will President Ilham Aliyev punish these arrogant bureaucrats? Their monthly salaries are AZN 1,500 ($890). We wonder how they buy $300,000 cars.”

In a Facebook post, opposition leader Ali Karimli wrote: “The arrest of Ali Hasanov’s grandson Nail Allahverdiyev is considered a small victory for public opinion. But what does this mean? It means that in this country, the government is so anti-people that if it were not for public opinion, it would not punish any officer’s grandson who caused two deaths.”