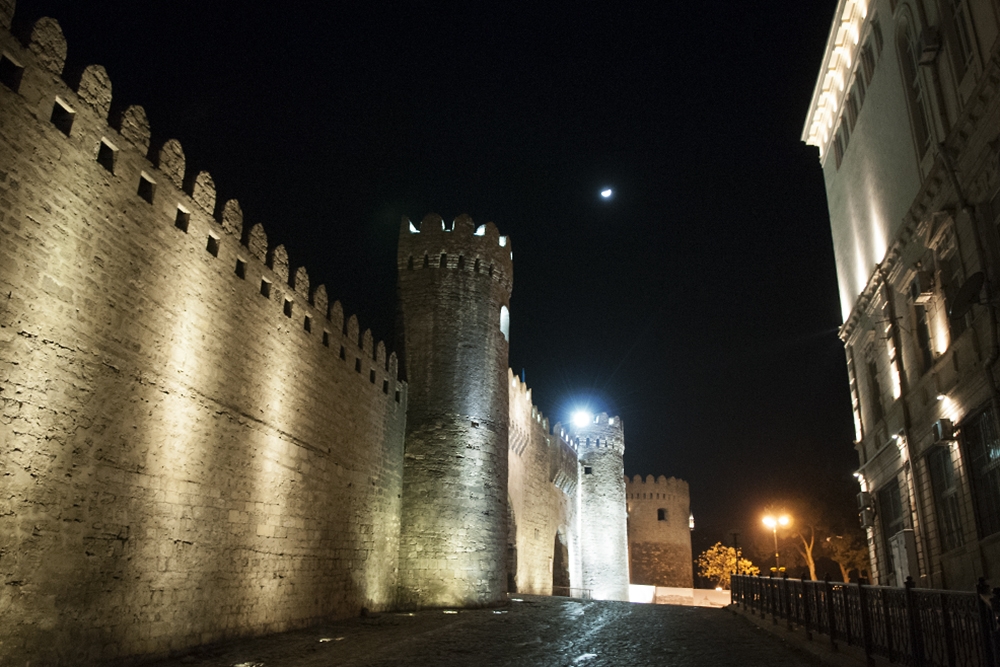 A crescent moon rises over the Old City walls of Baku in January 2008. With the first European Games about three weeks away from the opening ceremony, police and security guards are prohibiting locals from snapping photos of the historic neighborhood on the city’s Caspian Sea coast. (Photo: Dean C.K. Cox)

Like any host, Azerbaijan is trying to spruce up the capital Baku in advance of the inaugural European Games in late June. Authorities, for example, are calling on citizens to keep jalopies off the streets of the capital while the games are being staged. But one new rule is striking Baku residents as excessive: officials are prohibiting locals from taking photos in Baku’s historic Old Town.

In this sprawling city of over 2 million, the Old Town is a throwback to a quieter time, featuring narrow, cobblestone streets, a 15th-century palace and the Maiden Tower, a 30-meter-high stone structure and city landmark. It is the domain of carpet sellers, tourists and energy companies.

Officially, there is no rule barring photography. Nonetheless, for unclear reasons, police and security guards are taking action to prevent locals from snapping photos. The enforcement of the de facto ban has left some Baku residents confused and exasperated. “I was born and have grown up in this city and I am not allowed to take a picture of its most beautiful part,” complained one 29-year-old Azerbaijani man, Anar Gurbanov, who was walking through the Old Town last month.

This unwritten rule does not seem to apply to tourists. “Tourists are allowed to take photos, but citizens have to get permission from the management of the Old Town,” said one Old Town security guard, who gave his name as Vugar.

According to city regulations posted online, permission to take photographs is not needed for individuals and does “not apply to the amateur (including tourists’) shooting of monuments in the area.”

The reason for the clampdown remains a mystery. A city government spokesperson did not answer phone requests for explanation. Members of the governing Yeni Azerbaijan Party also could not be reached.

The head of one pro-government party, Ana Vatan (Motherland), expressed surprise at the situation. “I do not know what is going on in the downtown, but those irregularities, if there are such, are not imposed by the state and I will personally be in touch with the management of the downtown to see what is going on there,” said Zahid Oruc. Contacted again on May 19, Oruc had no update from the city government.

Some government critics are quick to voice their own theories. They explain that the government seeks total control over the population. Authorities are also preoccupied with controlling the image of Azerbaijan that is projected to the outside world.

The European Games are a pet project for President Ilham Aliyev, who runs the country’s National Olympics Committee. With roughly 6,000 athletes from 50 countries scheduled to participate, the Games offer Aliyev’s administration a prime opportunity to raise Azerbaijan’s international profile.

One male Azerbaijani resident of Baku says he has found a way around the restrictions; he speaks to police officers in English. “Scores of times I have taken photos as a tourist in the city,” said the man, who declined to be identified. “None of the security guards knows English, so you can say whatever you wish.”

Photography of Baku’s historic downtown is not the only new rule being enforced during the run-up to the European Games. The State Traffic Police also has forbidden “untidy, old cars with a color which does not match the [city’s] color scheme” from being driven in Baku during the Games.

Authorities did not specify which paint jobs would be acceptable, and which would not.

“Think about it yourself – what impression will cars make on foreign visitors to our country?” XeberTv.az reported State Traffic Police Director Vagif Asadov as saying in late April. “For that reason, let’s work together to improve the level of traffic culture.”

Hoping to avert traffic jams, Asadov urged that no weddings or funerals (in the South Caucasus, often large-scale events that jam streets) be held in the city during the month of June.

Other Games-related measures could prove burdensome for many Baku residents. Starting this month, for example, some public bus routes will be canceled until July. Others have been changed to avoid the city center, transportation ministry spokesperson Naming Hasanov said. A number of streets also will be closed – a decision that will inconvenience an estimated 120,000 people.

Baku residents may grumble about the changes, but can do little other than complain. As elsewhere in the Caucasus, the emphasis on pleasing foreign visitors is the government’s priority.

“A foreign guest, treated well, will talk about the hospitality ... once they leave the country,” said blogger Arzu Geybullayeva, a government critic. “You do not have to do the same for the locals because there is nowhere they can really leave. And no one they can complain to.”