The state has set up three “voluntary” funds for Azerbaijanis to cover post-war needs. But widespread reports suggest that people are being forced to contribute. 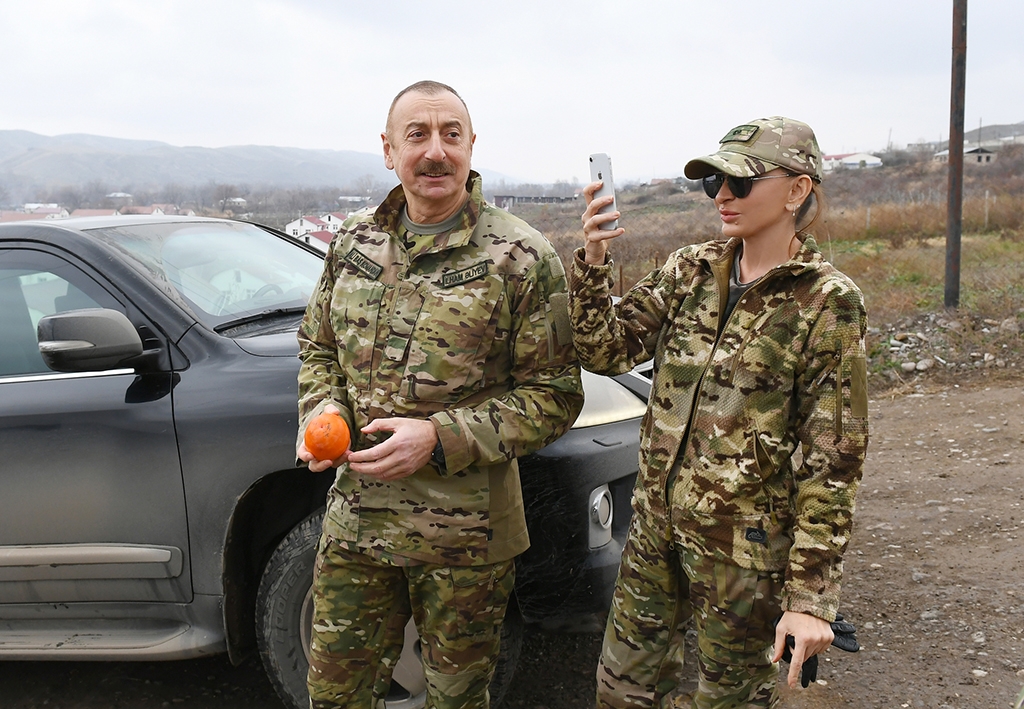 President Ilham Aliyev has framed the creation of the funds as a way to build national solidarity around major goals. (president.az)

Azerbaijan has established three new public funds aimed at helping the country rebuild and recover following last year’s war. But widespread reports of citizens being forced to donate, and a lack of transparency about what is being done with the money, have troubled many Azerbaijanis.

Two of the funds, aimed at helping current and former soldiers, were announced on December 8, about a month after the ceasefire ending the war with Armenia. The third, for reconstruction of the territories that Azerbaijan retook during that war, was introduced on January 4.

But the rollout of the funds has been controversial. There have been widespread reports on social media about Azerbaijanis who work for state companies being forced to contribute. Many have been posting on Facebook that, without their permission, 1 percent or half a percent of their pay has been garnished and transferred into one of the funds, “Yashat,” which is aimed at helping wounded soldiers and the families of soldiers killed in the war.

Employees of the state water company, Azersu, have been compelled to donate 1 percent of their salaries to Yashat, the independent newspaper Azadliq reported. The employees said that while they have been told that the donations aren’t strictly mandatory, those who don’t comply are threatened. The independent news agency Turan reported that it had spoken to two Azerbaijanis who were fired after complaining that 50 percent of their salaries had been deducted for Yashat.

“If those funds were completely voluntary, people would trust them,” Toghrul Valiyev, an economist, told Eurasianet. “But what does ‘voluntary’ mean in Azerbaijan? In Azerbaijan, voluntary often means compulsory. Unfortunately, this is the only way that government agencies work.”

In a month and a half of operation, Yashat has collected more than 26 million manats ($15 million) and spent 1.2 million manats, most of that on “improving living conditions” for veterans and families of soldiers killed in the war.

The reports of forced donations come at a time when the government is being heavily criticized for its plans to construct a new 37-story headquarters for the central bank at a cost of $264 million. “The state is spending 218 million euros on a new national bank and at the same time forcing the public to donate to Yashat out of their salary. Does the National Bank really need this building at this time of crisis?! It’s too much,” tweeted one Azerbaijani, Haldun Novruzzade.

There have been similar reports about another of the new funds, the Azerbaijan Army Relief Fund, which is designed to support the military. (This fund, for reasons that have not been explained, was formed immediately following the dissolution of a similar fund, the Fund for Assistance to the Armed Forces, which had been created in 2002. It now holds about $136 million in various currencies, with most of that rolled over from the previous fund.)

One employee of SOCAR, the state oil and gas company, told Azerbaijani news site Toplum TV that the company has docked 20 manats (about $12) from their monthly salary for the Army Relief Fund.

Fund officials have insisted that donations are strictly voluntary. “No one can force employees to donate,” one official from Yashat told the independent news site Mikroskop Media. “Everything in Yashat happens voluntarily.”

But other officials have acknowledged that employees are being pressured. Following reports that employees of Azerkimya, a SOCAR subsidiary, were donating 10 percent of their salaries to Yashat, the head of the union of oil and gas workers portrayed the donations as a patriotic duty, saying that the union had decided on the contributions.

“If someone doesn’t want to donate, then they are saying ‘I am not Azerbaijani,’” said Jahangir Aliyev, the chairman of the Trade Union of Oil and Gas Industry of Azerbaijan, in an interview with Mikroskop. “If any employee protests, let them talk to me,” he said. “One person fought and was wounded, and the other stayed at work and survived. What is the problem with donating 10 percent of your salary?” he asked.

Adding to the controversy is the fact that the operations of the funds are non-transparent. While Yashat has published what it has spent so far, it has not made public the specific sources of its funds. The Army Relief Fund, meanwhile, has published only the total amount of money it has collected and – as with other military spending – its expenditures are secret. The reconstruction fund, knowns as the Karabakh Revival Fund, is newer and has yet to publish any information on either its sources of funding or its expenditures.

“Who can guarantee that officials who embezzle state funds will not also embezzle the money from this fund?” asked Akram Hasanov, a lawyer and financial analyst, in an interview with the Turan news agency. “After all, we’re talking about the most corrupt spheres – construction, road construction, and so on – in every country, even the most developed ones.”

State officials have downplayed those worries. “This [Yashat] will be a transparent platform,” said Ulvi Mehdiyev, the chairman of the State Agency for Public Service and Social Innovations, shortly after its launch. “Those who want to provide assistance to the families of martyrs will be able to see everything clearly.”

It is unclear why Azerbaijan is taking this approach to funding its post-war priorities, rather than using more traditional forms of income-raising like taxes.

“If the state, rather than fulfilling its constitutional duties properly using the approved state budget, instead creates funds and collects mandatory donations for various causes, then it’s not doing its job,” wrote Nazim Baydamirli, a former member of parliament, in a December 20 Facebook post.

But the new funds follow a pattern: In the early days of the COVID-19 pandemic, the country set up a similar fund. That has since collected 114 million manats and spent some of it on vaccines. But the expenditures have not been published.

“There has been no accounting, no explanation” of the COVID fund, noted journalist Ilkin Muradov in a Facebook post following the creation of the new post-war funds. “It will just be forgotten.”

President Ilham Aliyev has framed the creation of the funds as a way to build national solidarity around major goals. “This is a great resource and a manifestation of solidarity,” he said regarding the COVID-19 fund in June.

Others, though, see it as a means for the state to monopolize all activity in the country. Togrul Valiyev, another economist, noted that in the early days of the war some Azerbaijanis set up a private “Volunteer Fund” to provide aid to soldiers’ families, and then the state swooped in. The state-run funds are intended “to show that we are here, we are the biggest fund here,” he told Eurasianet.