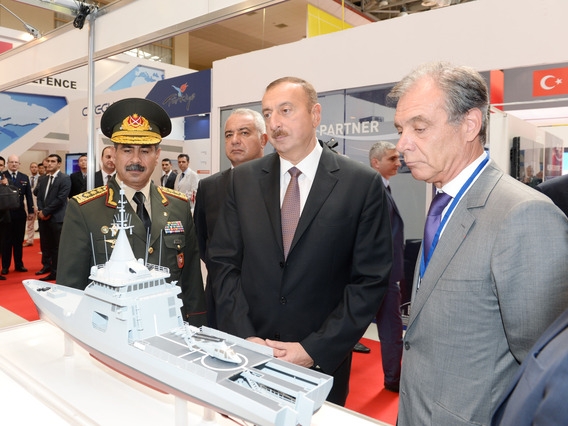 Azerbaijan has held the country's first international defense exposition, showing off the wares of its military-industrial complex and attracting foreign companies hoping to profit off Baku's rapidly growing military budget.

The expo, ADEX, was held in Baku this week and featured 200 companies from 34 countries. The profile was somewhat similar to the region's other defense expo, Kazakhstan's KADEX, with foreign exhibitors dominated by Russia, Turkey, Israel, and Belarus, along with a smattering of European, American, and Asian companies.

Azerbaijan, like Kazakhstan, is putting a lot of effort into building a local defense industry by attracting bigger, more experienced foreign partners to set up joint ventures with Azerbaijani companies. It's doing so to reduce its dependence on foreign weaponry, said Deputy Defense Minister Yahya Musaev said at the show. “It is no secret that this [foreign purchasing] leads to a one-sided dependence. Therefore, we conduct scientific research, train specialists to create the technology for national defense industry."

There seem to have been a lot of shipbuilders and navy-related companies at ADEX; Dutch shipbuilder Damen was the "platinum sponsor" of the show and Chinese and Turkish shipbuilders also exhibited, suggesting they think there is naval business to be had in Azerbaijan.

And despite the fact that American and European companies are restricted from selling weapons to Azerbaijan there were several companies from the U.S. exhibiting at ADEX including Bell Helicopter, dronemaker Aerovironment and a number of smaller countries. Among the European arms manufacturers were (in addition to Damen) France's MBDA and Thales and several smaller companies.

There don't seem to have been too many big contracts signed during the show; South Africa's Paramount Group announced the creation of a joint venture with Azerbaijan’s AirTechServices Corporation to carry out helicopter modernization in Azerbaijan.

There were, however, a good number of VIP visitors from abroad. Most notably, Israel's defense minister Moshe Yaalon made his first visit to Azerbaijan on the occasion of the show. Georgian Prime Minister Irakli Garibashvili also visited ADEX, as did Turkish Defense Minister Ismet Yilmaz and lower-ranking government officials from France, Russia, Belarus, Pakistan, Malaysia, and Croatia.