The move appears to be part of a steadily increasing effort by Baku to exert control over the road in southern Armenia that passes through pockets of Azerbaijan-controlled territory. 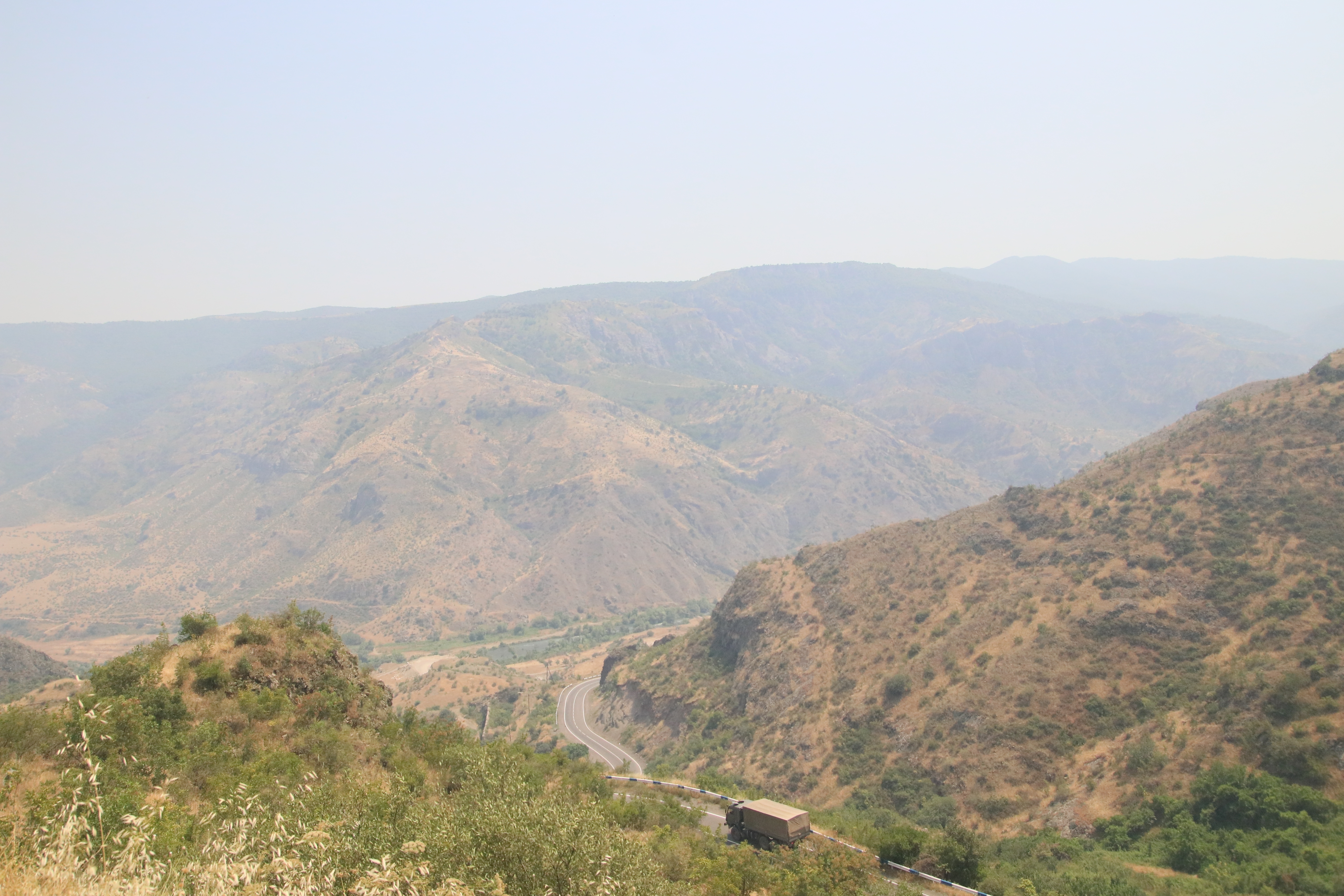 Trucks ply the route near the village of Eyvazli. (photos: Joshua Kucera)

Azerbaijani police are stopping Iranian trucks transiting a key road through southern Armenia and charging them a fee for entering Azerbaijan.

Armenia’s National Security Service reported on September 12 that Azerbaijani police were conducting the checks on vehicles with Iranian license plates near the village of Eyvazli. Local media also reported that police were charging the Iranian vehicles a substantial fee.

The next day, an Azerbaijani official confirmed that the checkpoints had been set up. The territory in which drivers are being stopped is Azerbaijani territory and thus they “can be checked accordingly,” Elshad Hajiyev, a spokesperson of the Ministry of Interior Affairs, told BBC Azerbaijani. “If the fact that there is a police post at Baku-Yevlakh road is not surprising, then it shouldn’t be surprising that there are police posts on Azerbaijan’s liberated territories,” Hajiyev said, referring to two cities deeper inside Azerbaijan.

The same day, Azerbaijan’s State Customs Committee released a statement confirming that it was collecting customs payments at the Goris-Kapan road. “According to the Tax Code of Azerbaijan, auto vehicles of foreign countries entering and leaving the territory of the Republic are subject to the road tax,” the statement read, adding that the vehicles are also subject to state fee for permit for international automobile delivery.

The road in question connects Goris and Kapan, the two major towns of southern Armenia. It also crosses through several small slices of Azerbaijani-controlled territory, and Baku has gradually been exercising its newly won sovereignty over that territory after retaking it from Armenia as a result of last year’s war.

Earlier this year it first set up border guard posts, flags, and signs reading “Welcome to Azerbaijan” on its sections. Then, in late August, it blocked the road for nearly 48 hours.

​​One Iranian driver, citing his fellow truckers stuck in southern Armenia, told RFE/RL on September 13: “They say the Azerbaijanis demand $120 from every truck for using the road.” Another driver told Armenia’s Fifth Channel that they were being charged twice on the road (and used the figure of $130) – once as they traveled north through it and a second time as they returned south.

“Two hundred sixty dollars is a lot of money for us,” the driver said. “If we can’t get that money reimbursed, I personally won’t come.” The driver added that the officers who stopped him were wearing uniforms of the customs service and that they told him to turn off his phone and not film the exchange.

The development follows a period of increased tension between Azerbaijan and Iran. In August. Azerbaijan’s Foreign Ministry summoned Iran’s ambassador to Baku and presented him with a note of protest detailing “undesirable facts of Iranian trucks traveling to Karabakh.”

This is not the first time Azerbaijan has taken issue with Iranian trucks traveling to Nagorno-Karabakh, which is internationally recognized as Azerbaijani territory but which since the first war between Armenia and Azerbaijan in the 1990s has been controlled by Armenian forces.

This time, Baku also has blamed Russian peacekeeping forces, which deployed to the region as part of the ceasefire agreement ending last year’s war, and which now patrol the road connecting Armenia to Nagorno-Karabakh.

On September 12, Azerbaijan’s Defense Ministry reported that it had sent letters to the Russian Defense Ministry as well as to the Russian peacekeeping contingent in Karabakh, asking them to stop the “illegal crossing of third-country vehicles into the territories of the Republic of Azerbaijan where Russia’s peacekeepers are temporarily stationed.”

The checkpoints appear, however, to apply to trucks whether or not they are going to Karabakh. And they also appear to only be directed at Iranian vehicles, and not Armenian or any other vehicles entering Azerbaijan-controlled territory.

Iranian officials have not yet directly responded to the development.

“We are trying to use the resources of the Islamic Republic of Iran for regional development, peace and stability, with the participation of all neighbors. In particular, the relations with Armenia, as well as our other neighbors are on the agenda,” a spokesperson for Iran’s Foreign Ministry, Saeed Khatibzadeh, said.

On September 14, Iran’s ambassador to Azerbaijan Abbas Mousavi tweeted a photo of a meeting with Hikmat Hajiyev, a senior adviser to Azerbaijan President Ilham Aliyev, and reported that the two discussed “our bilateral ties and issues of common concern and interest.” Hajiyev responded, saying the two “had indeed fruitful discussions on the issues on our bilateral agenda and reviewed ways forward.”

Following the two-day closure in August, which also disrupted cargo traffic between Armenia and Iran, Iran’s embassy in Yerevan expressed concern and said it hoped that the Armenian government will speed up work on “alternative routes” for Iranian-Armenian trade. An alternative road is in fact under construction, through the towns of Aghvani and Tatev.

But that is not a short-term solution.

“Iranian trucks with large cargo can't go through the alternative road in Tatev that is under construction,” the deputy mayor of Goris, Karo Kocharyan, told news website factor.am. Kocharyan said the checkpoint had been operating since September 10 and that drivers are being charged $130 for using the road, an additional $60 for larger trucks, and $500 for fuel trucks.

The Armenian government has not yet publicly responded to the reports, and the security service has not issued any more updates.

During a September 13 session of parliament, Vahe Hakobyan from the opposition "Armenia Alliance" and a former governor of the Syunik region where the road is located, raised the issue and said Armenia’s economy stands to suffer: “As you know, over 40 percent of our cargo turnover [with the world] is carried out through Iran.”

On September 14 Arstvik Minasyan from Armenia Alliance told Fifth Channel that “today or tomorrow” the parliament along with security organs of the country was planning to hold a closed-door discussion on the issue.