Experts estimate that reconstruction could take 10 years and tens of billions of dollars. 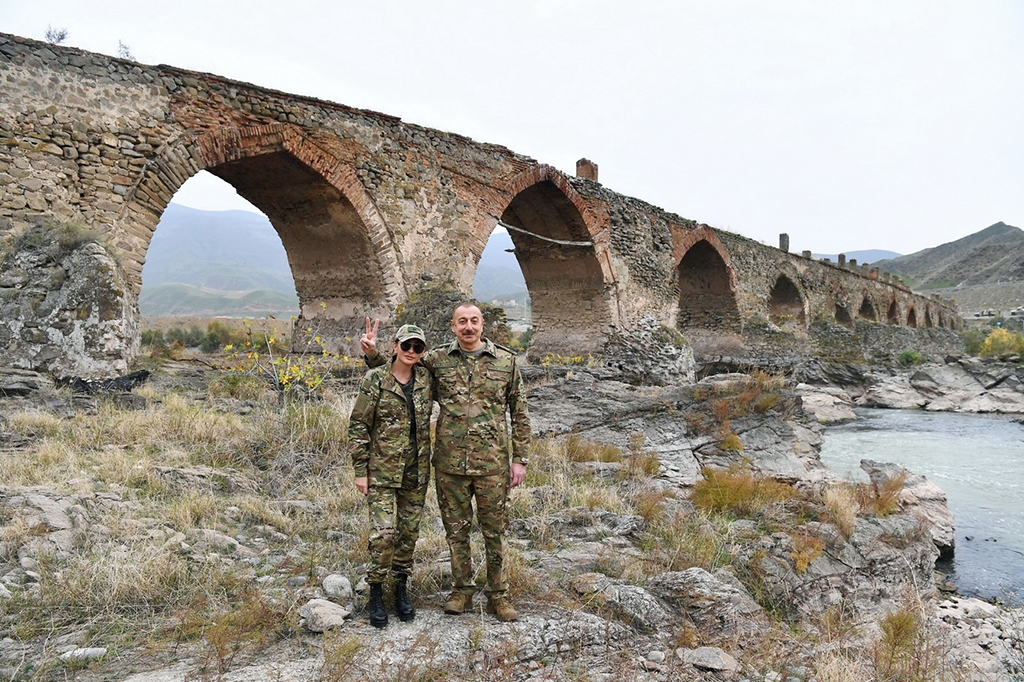 The Azerbaijani government is pushing forward with an ambitious plan to reconstruct the territories that it recently won from Armenia, many of which have been virtually leveled since Azerbaijan lost control of them in the 1990s.

President Ilham Aliyev highlighted the reconstruction plans during a November 16 tour of some of the territories along with his wife and first vice president, Mehriban Aliyeva.

“A new master plan will be drawn up. Relevant instructions have been given. A master plan will be developed for each city. All office buildings, public buildings, schools and medical centers will be established here. All infrastructure will be put in place. Streets, parks and alleys will be built. Victory monuments will be erected in all the cities and life will return here,” Aliyev said during a visit to Jabrayil.

The government has not said how much it intends to spend on all of this. Independent economists have estimated the costs in the tens of billions of dollars; Azerbaijan’s annual state budget is currently about $15 billion.

“There is basically no infrastructure left in Jabrayil, Fuzuli, Zangilan, and Gubadly,” four of the seven regions that Azerbaijan regained control of, Valiyev said. “It’s going to cost about as much as Azerbaijan spends in a year” on its entire budget, he said.

Azerbaijan will also likely try to attract private financing for the reconstruction. “Many entrepreneurs, natives of these regions, will probably want to invest in the reconstruction of industrial and commercial enterprises in their villages and towns and may even offer some donations,” said Avaz Hasanov, the head of the NGO Humanitarian Research Public Union, in an interview with news website Caucasian Knot.

So far the government has only given small hints of the cost of reconstruction.

During his visit to Jabrayil, Aliyev announced that a new road would be built from Fuzuli, on the far eastern end of the newly retaken territories, to Shusha, the key Azerbaijani city in the region. Following the visit he announced that the government was allocating 50 million manats ($29 million) for the 101.5-kilometer road linking Ahmadbeyli (in territory that Azerbaijan had already controlled) through Fuzuli to Shusha.

Other plans for new transportation links also have been announced: roads in the region of Talish and Sugovushan (which the Azerbaijani government renamed from the Armenian Madaghis shortly after retaking it early in the war) were already being reconstructed in late October, local media reported. The cost for that reconstruction has not been announced.

Azerbaijan’s state railway company also has announced plans to rebuild the rail line connecting Yevlakh, in territory that Azerbaijan had already controlled, into Karabakh all the way to Khankendi (the city Armenians call Stepanakert). This is particularly aspirational, given that Armenian forces still control much of this territory, including Stepanakert.

Work in the newly retaken territories is being undertaken under a decree that Aliyev signed on October 29, setting up temporary special administrations in the territories. Temporary commandant offices are being established in each district and Ehsan Zahidov, a spokesperson for the Ministry of Internal Affairs, said they will be headed by local police chiefs.

Various government bodies then began expanding their operations into the region. The State Security Service and Ministry of Emergency Situations announced that they had set up local structures. The Ministry of Internal Affairs said that it had moved the Shusha police department into Shusha; it had been previously located in the Terter region.

The Ministry of Emergency Situations has taken control of the Sugovushan reservoir, in the Terter region. That will help Azerbaijan take partial control of the waters from the critical Sarsang reservoir, and ameliorate serious water shortages that the country has been suffering.

“Until now, we never knew whether we could get water from the Sarsang reservoir or not,” Valiyev said. “Now we will be able to use the system normally.”

The government also has sought to open up mining in the newly retaken territories. A consortium between the state enterprise Azergold and a (yet unnamed) foreign company has been formed to mine for gold in the regions of Zangilan, Vezhnali, and Kelbajar, said Tahir Mirkishli, a member of parliament. “The consortium has said that they are ready to start excavation works in the liberated territories as soon as they are demined,” Mirkishli told a November 18 meeting at the Azerbaijan State Economic University dedicated to Karabakh’s future economic plans.

The rush to enter the newly retaken territories has not been limited to government bodies. Several banks announced that they plan to open branches across the region.

“Opening Pasha Bank’s branch in Shusha, we will support the state in the implementation of initiatives aimed at reintegrating the liberated lands,” said the chairman of Pasha Bank, which is owned by First Lady Aliyeva’s family.

Cultural institutions, too, are rushing to reenter the territories. The State Tourism Agency is working on creating tourist routes in the region. And officials are even exploring the possibility of holding the 2021 version of Turkvision, an international song contest for the Turkic world, in Shusha.