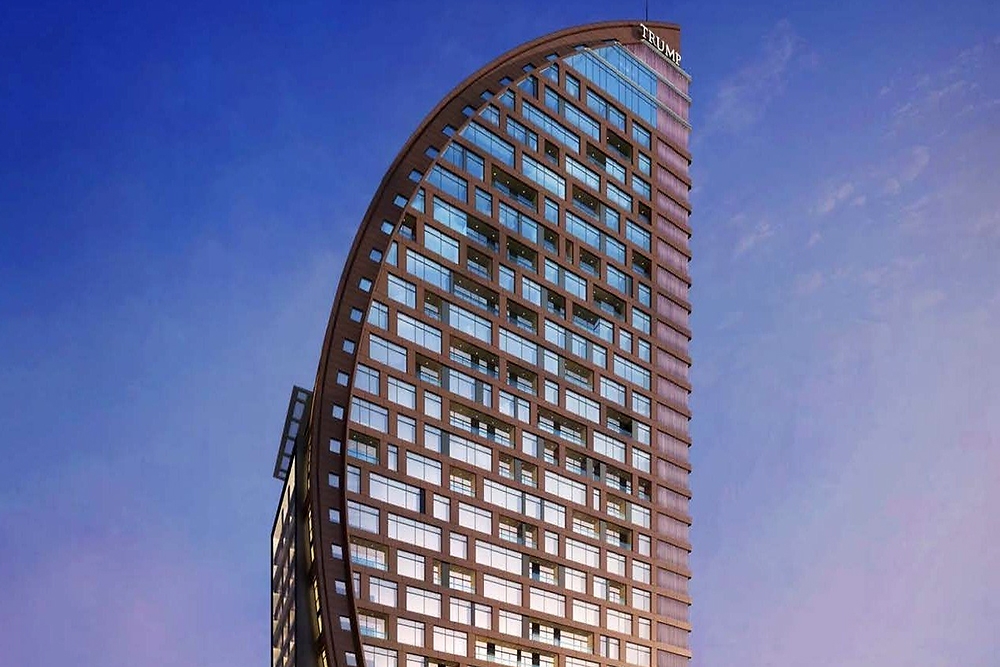 The Trump Hotel in Baku is not owned by US presidential candidate Donald Trump, but was constructed and is owned by a company called Garant Holding. The 33-floor Tower is situated in one of the central districts of Baku and features 72 ultra-luxury residences and 189 hotel rooms. (Photo: Trump Hotel Collection)

US presidential candidate Donald Trump has called for a ban on Muslim non-citizens from entering the United States. But that stance does not seem to influence his desire to earn money from business opportunities in predominantly Muslim countries.

Among the mainly Muslim states where Trump has financial interests is Azerbaijan. Under a licensing deal in which his name is attached to a hotel & luxury apartment building in the Azerbaijani capital Baku, Trump earned $2.5 million in 2014, according to filings that he has made in connection with his presidential run.

Trump’s call to ban Muslim visitors has caused a backlash in some Muslim nations where he has investments. In Dubai, for example, a leading business publication, Arabianbusiness.com, has published a commentary urging Gulf-state investors to reevaluate their financial ties to Trump.

“The time is now fast approaching when any local firms associated with the Trump brand must at least consider a serious review of their strategy,” the commentary stated. “Muslim consumers in the Middle East have absolutely no say in next year’s US presidential election – but they can still vote with their wallets.”

Already, one firm, the Landmark Group, a major retailer in the Gulf, has announced that it will stop carrying items from the Trump Home decor collection. Meanwhile, builders of a luxury residence and golf course development in Dubai that Trump is involved in have taken down billboards featuring the candidate’s image. At the same time, representatives of the developer, DAMAC Properties, have resisted calls to cut ties with Trump altogether. A statement distributed by the company noted a desire to keep business and politics separate.

“Our agreement is with the Trump Organization as one of the premium golf course operators in the world, and as such we would not comment further on Mr. Trump’s personal or political agenda,” the statement quotes Niall McLoughlin, DAMAC’s senior vice president, as saying.

The vocal response in the Gulf, as well as in Turkey, to Trump’s call for a Muslim travel ban contrasts sharply with the muted reaction in Azerbaijan. State-controlled mass media has largely avoided the topic, and representatives of the Azerbaijani government have not commented publically on Trump’s inflammatory statements.

“Our government will not respond to this issue,” said Natig Jafarli, the executive secretary of the opposition movement REAL. “Generally, the Azerbaijani government always prefers to remain silent in these kinds of situations.”

Azerbaijani leaders have demonstrated increasingly authoritarian tendencies in recent years, carrying out a far-reaching crackdown on basic rights while taking steps to muzzle independent media outlets. On December 17, a US legislator, Christopher Smith, a New Jersey Republican, introduced a bill that would impose sanctions against members of Azerbaijan’s elites. Specifically, the legislation would deny visas to those “who derive significant financial benefit from business dealings with senior leadership, and members of the security or judicial branches in Azerbaijan.”

“The United States can no longer remain blind to the appalling human rights violations that are taking place in Azerbaijan,” Smith was quoted as saying in a statement.

The Trump complex in Baku was constructed and is owned by a company called Garant Holding, which is controlled by Anar Mammadov, who is a son of Ziya Mammadov, Azerbaijan’s transportation minister.

Situated in central Baku, the building, known as Trump Baku, is 33 stories tall and features a distinctive façade, resembling a billowing spinnaker sail. The building’s 72 apartments range in size from roughly 900 to over 9,000 square feet. Its 189 hotel rooms, meanwhile, are at least 645 square feet in size.

Anar Mammadov has a variety of business interests in infrastructure, construction, oil and gas production, international trade and telecommunications. Mammadov is also the founder of the Azerbaijani-American Alliance, and the president of the Azerbaijan Golf Federation.

Representatives of Garant Holding declined to respond to multiple EurasiaNet queries seeking comment on the company’s association with Trump and the potential fallout from the presidential candidate’s remarks.

Although most members of Azerbaijan’s political and economic elite seem content not to comment, at least one, MP Fazil Mustafa, believes Azerbaijani officials should respond.

“There should be a sharp response to this statement. This is racism,” Mustafa said of Trump’s Muslim travel ban idea. “I hope there will be an answer from our side.”

Durna Safarova is a freelance reporter who covers Azerbaijan.