“Azerbaijan and meykhana exist in parallel. One reflects the other.” 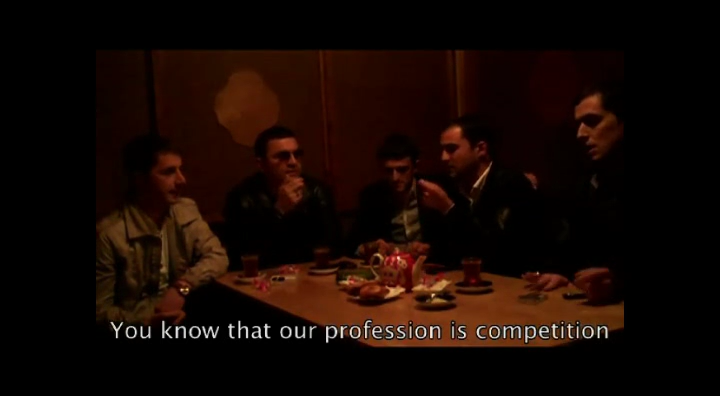 Like any kind of improvisation, meykhana, a musical style akin to rap, has its detractors and its devotees in Azerbaijan. Literally translated as “the place of wine,” meykhana is the poetry of the country’s poorer neighborhoods, occasionally performed at weddings, capable of inducing a chuckle and a raised eyebrow.

The form originated on the Absheron Peninsula. Since Azerbaijan gained independence in 1991, it has gained a broad popular following, prompting televised contests and inviting comparisons with the much younger Azerbaijani hip-hop movement.

Banned during much of the Soviet period for its counter-cultural potential, meykhana was briefly encouraged during World War II to use as propaganda against the Nazis. After the war, it was again banned. The tradition was kept alive by underground poets who passed it on through informal schools that still exist today.

Meykhana can best be heard in one of the smoky teahouses of the blue-collar Baku suburbs of Mashtaga, Ahmedli, or Yasamal -- the three most popular meykhana centers in Azerbaijan.

The men -- and very rarely, a woman – who sing meykhana pick a topic and then usually tap out a 6/8 rhythm with their fingers on a table or on a nagara drum, a small drum placed under the arm and beaten with the hands. They take turns improvising a chorus and individual verses, finding inspiration as they go.

While different schools have different approaches to meykhana composition, the basic criteria are constant: adherence to a strict rhythm, rhyme and theme. “Azerbaijan and meykhana exist in parallel,” said Kerim Novruzov, a widely respected meykhana poet from Mashtaga. “One reflects the other.”

Novruzov, like all famous meykhana artists, has studied classic Azerbaijani and Persian poetry and literature for most of his life. He has seen meykhana emerge from underground after Azerbaijani independence, and then watched it spread throughout a country. “Meykhana has always been about everyday life. It is a communal approach to consciousness,” he said. “Problems everyone knows and sees, like the drains flooded after the rain -- this is our material.”

The problems can run the gamut; the language in some meykhana songs is considered too vulgar for TV. Some embrace traditional themes, including honor. Others take aim at perceived corrupting influences “imported” from the West, such as homosexuality.

Personal attacks against individuals are not common, except if two poets are competing against each other, Novruzov commented. Meykhana lyrics also tend to shy away from politics. Polemics make for bad poetry, Novruzov added.

Meykhana contests are broadcast several times per year by several national channels. The winners can take home a car or other luxury items. Audiences pay a small fee for each SMS sent to the TV station to vote for the best performer.

Mehman Ahmedli, a lifelong meykhana poet who runs a meykhana school in Ahmandli, believes the musical form risks becoming a victim of its own success. "Back then, it was about love,” he said in reference to meykhana’s pre-broadcast era. ”We were hungry, had no money, but we did not care about being popular. And today everyone just races to get on TV and get the money."

Not all Azerbaijanis see meykhana as a musical genre worthy of praise. As his friends nodded in agreement, 25-year-old blogger and youth activist Ali Novruzov (no relation to the meykhana poet) described the songs as “like a cancer for Azerbaijan.”

“Put it in a museum already! It’s just another tool to make zombies of . . . youth,” Novruzov said.

Meykhana invariably draws comparisons to hip-hop, both in its content and message. To a certain extent, Meykhana is hip-hop unplugged. One of Azerbaijan’s first hip-hop groups, Dayirman, gained fame with a war-time anthem “Karabakh or Death.” Emin Efendi, the director of Dayirman Productions, said that while hip-hop and meykhana follow different paths, the individual artists all know one another.

“We grew up in the same ghettos, after all,” he said.

“There’s a time and a place for each type of music,” commented Baku rapper Ibrahim “Oran [Uranium]” Ibrahimov, “All my words, thoughts, feelings come out best in rap, but meykhana is in my blood.”

That connection is what will keep this form of music alive for years to come, adherents say. “If meykhana could survive Stalin,” commented poet Novruzov, “it can survive anything.”