Azerbaijan: Suicide Brings LGBT Community Out of the Closet 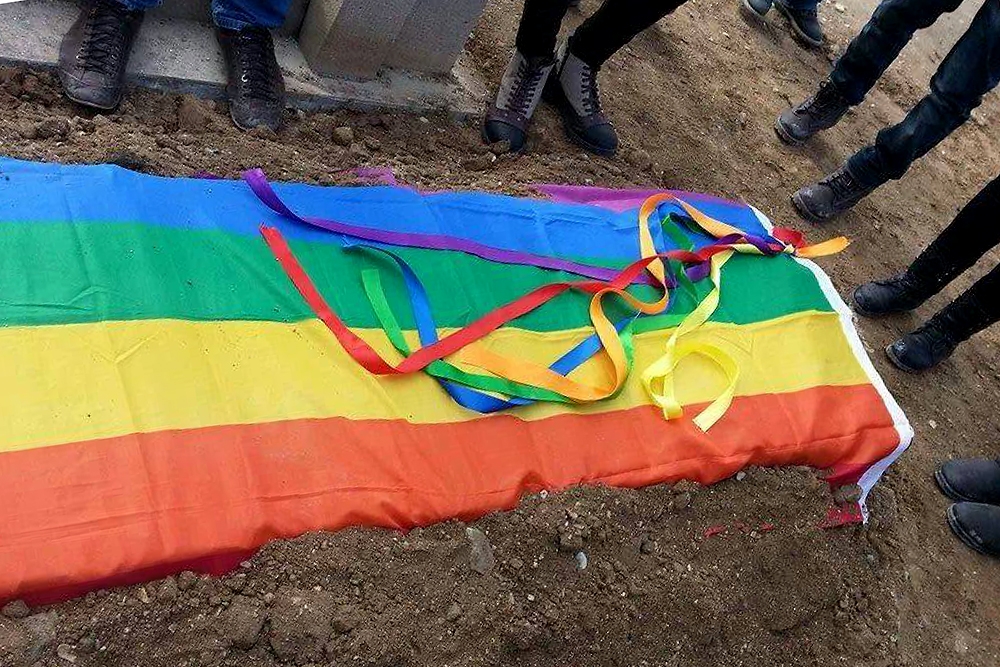 Shakhmarli is laid to rest the day after his suicide. (Photo: Free LGBT)

The suicide of a gay rights activist in Azerbaijan is prompting the country’s LGBT community to become more assertive in fighting for civil rights.

Isa Shakhmarly, the head of the Free LGBT non-governmental organization, died on January 22, using a rainbow flag to hang himself in his Baku apartment. He was 20. In a suicide note, he faulted Azerbaijani society at large for pushing him to take his life. “This world . . . is not able to hold my colors,” the note stated.

The LGBT community until now has kept a relatively low profile in socially conservative Azerbaijan. But Shakhmarly’s death catalyzed Azerbaijani activists to take public action. On January 27, over 20 activists held a news conference in Baku to announce plans for a signature drive for fresh legislation to protect sexual minorities, and for an outreach campaign and a hotline that could provide psychological counseling. They also designated January 22 as a “Day of Pride in Azerbaijan’s LGBT Community.”

The January 27 news conference marked the first such event held in Baku by LGBT activists, and took place without incident. A flash-mob event in downtown Baku area to memorialize Shakhmarly also did not experience any disturbances.

In planning their civil rights campaign, LGBT activists intend to capitalize on the fact that Azerbaijan will assume the chairmanship in May of the Council of Europe, one of the continent’s leading human-rights watchdog organizations.

“We will use this opportunity to demand further reforms in this area,” said Javid Nabiyev, a friend of Shakhmarly and the leader of Nefes (Breath), an LGBT non-profit organization.

On January 24, the Council of Europe’s rapporteur on LGBT rights, Robert Bedron, issued a statement of concern about Shakhmarly’s suicide.

The civil rights campaign in Azerbaijan is fraught with the potential for civil tension to spill over into confrontation, similar to that which occurred in neighboring Georgia last May. Homosexuality has not been a criminal offense in Azerbaijan since 2000, and the constitution proclaims the “equality of all people.” But most Azerbaijanis are not accepting of public displays of same-sex relationships or identity. Gay clubs do not exist.

“We are not accepted by society -- by parents, relatives, neighbors, classmates and so on,” Nabiyev declared at the news conference. “Some people avoid us, while others show open intolerance.”

Shakhmarly’s friends claim that the young man lived alone – an unusual status in this communal society – since his family did not accept his homosexuality. His suicide did not appear an impromptu decision; the day before his death, he reportedly paid off all of his debts.

A member of parliament who asked not to be named suggested that new legislation, as proposed by the LGBT activists, would do little in practice to gain LGBT Azerbaijanis a greater degree of mainstream social acceptance.  “The law cannot change people’s attitudes. Better educational work is needed,” the MP said.

Azerbaijan’s legislation already is in sync “with European [Council of Europe] standards for LGBT-rights’ protection,” asserted the MP, who works on social-welfare issues. “There is no need to approve a new law.”
Parliament will not discuss any bill on the topic, he predicted.

LGBT activists directed their public frustration more at society than at officials, but causes for concern about the government do exist. While several LGBT-rights groups exist in Azerbaijan, none have been registered officially as non-governmental organizations, including Shakhmarly’s Free LGBT group.

Although no official record of violence against sexual minorities exists, police do not always listen to complaints about prejudice or harassment, commented Free LGBT activist Gulnara Azimzade. She said going to the police was “often useless because the police attitude toward us is often humiliating.”

The government has not commented on Shakhmarly’s death or responded to the activists’ remarks contained in his suicide note.  Azerbaijani media reports about Shakhmarly’s suicide and subsequent events have tended to be either sympathetic or neutral. But the mood is different online, where many social-network and forum users, particularly those stressing their Islamic beliefs, have left aggressively homophobic denunciations of Shahkmarly and other members of the LGBT community.

Similar hostility was on display at Shakhmarly’s funeral in the strongly conservative Baku suburb of Bina. Some residents threw stones at Shakhmarly’s friends and their cars as a protest against burying a gay man in the local cemetery. The burial occurred only after a Bina mullah stated that a person’s past cannot prevent his interment.

For LGBT activist Nabiyev and others, thrown stones and name-calling won’t deter them from agitating for their rights. “Isa has died, but his fight for equality of all people in Azerbaijan will continue,” Nabiyev said.