Azerbaijan: Taking Veneration for Past Leader to a Turkmenbashi Level? 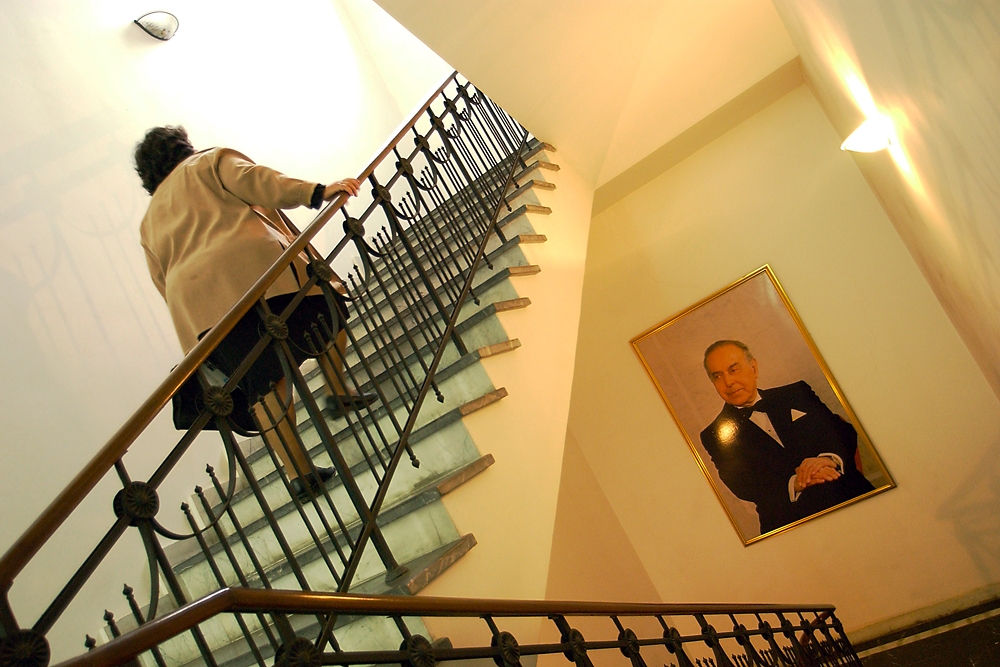 The visage of Azerbaijan’s former leader, Heydar Aliyev, seems to be omnipresent in Baku; smiling down from highway billboards at cars, raising an arm in salutation outside the Central Bank, or appearing as an imprint on TV screens.

Given this context, it seems only natural that Azerbaijan’s National Academy of Sciences features a department devoted to the study of Aliyev -- Azerbaijan’s third president, as well as father of the incumbent leader – and the man credited with putting the country on its feet in the 1990s as an independent state and international energy power.

But to some historians, the department is more a reminder of Azerbaijan’s Soviet past than its prosperous present. It also invites comparisons between Azerbaijan and Turkmenistan, one of the most repressive states on earth, where a spiritual guide attributed to deceased leader Saparmurat Niyazov, known as the Ruhnama, remains required reading for those aspiring to go to college.

The Department of Aliyev Studies (Əliyevşünaslıq) was created in 2008 within the academy’s History Institute. It is charged with researching Aliyev’s roles as, initially, a KGB general, then first secretary of Azerbaijan’s Communist Party, a member of the Politburo, and, finally, as president of Azerbaijan from 1993 to 2003. The late president may be the only Azerbaijani public figure with a department of his own at the Academy of Sciences. But for the History Institute’s deputy director, Jabi Bahramov, there’s a simple explanation: no political leader ever did as much for Azerbaijan as Aliyev, he said.

“Even if he was working for the Soviet regime, Aliyev was preparing Azerbaijan for independence,” Bahramov claimed, citing as an example the “17,000 students” who in the 1970s and 1980s “were sent to the best universities of the USSR” and “who are ruling the government today.”

“His activity cannot be compared to that of any other leaders. He prevented the destruction of Azerbaijan’s tradition of statehood. Aliyev laid the foundation of a new statehood. It is a great success and it deserves scientific study.”

The task involves six researchers, the youngest of whom is 56 years old, and six assistant researchers.

Few would dispute that Aliyev’s life – from his childhood in the remote autonomous region of Nakhchivan, to his decades at Azerbaijan’s political center, and his time at the pinnacle of Soviet power as a member of the Politburo – open up interesting lines of historical inquiry. But 46-year-old historian Rasul Huseynly wonders if the existence of such a department merely repeats the practices of the Soviet era.

“It is like learning Leninism,” said Huseynly, a professor of Azerbaijani history at Baku State University for nearly 20 years. “[The study of Heydar Aliyev] has more ideological aspects than scientific ones, since today the state ideology is based on the Aliyev heritage.”

There is “no need to study” Aliyev’s life “scientifically” as an academic discipline unto itself, said Huseynly. “It is part of the history of Azerbaijan and it could be studied in that department.”

In 2011, Education Minister Misir Merdanov noted that the study of Heydar Aliyev’s life would be “a gift” to the history of Azerbaijan itself.

But one former chief of staff under Aliyev argues that setting up a Department of Aliyev Studies in the National Academy of Sciences is taking matters too far. While the late president “was not against saying nice words in his own interest and hearing nice words about himself,” his “approach” to propaganda was “rational,” said Eldar Namazov, now an opposition politician.

Namazov, who served as an Aliyev advisor from 1993-1999, said, “[D]uring his presidency, it was not . . . like it is today; like naming parks, places after him, creating academic disciplines to study his legacy.” Such measures, he added, only result in mockery.

Since its opening, the Department of Aliyev Studies has been focused on the completion of a two-volume biography of Aliyev’s life; the first volume covering events from his birth in 1923 until his forced resignation from the Politburo in 1991; the second on his presidency of Azerbaijan from 1993 until his death in 2003.

Based on materials contained in the Azerbaijani and Russian State Archives, the biography, to be printed first in Azeri, is scheduled for release on the 90th anniversary of Aliyev’s birth, May 10, 2013.

Some Azerbaijani historians predict the work will be more hagiography than measured and balanced biography. “Those books cannot be used as historical works in the future because they do not present serious scientific research,” charged Altay Goyushov, a former visiting professor in the University of California, Los Angeles’ faculty of Near Eastern Languages and Cultures. “[T]heir ideological result is planned before the research even starts.”

Already, “enough work” has been done in Azerbaijan about the late leader that features authors simply copying “his speeches exactly as they are, without any analysis, any line of argument,” commented Vasif Gafarov, a 30-year-old former assistant professor of Azerbaijani history at Baku State University.

“Both [positive and negative] views should be used [in writings about Aliyev’s life] to find a common denominator,“ Gafarov added.

Bahramov, the History Institute’s deputy director, states that the biography’s purpose is not to criticize, but to present a complete chronicle of Aliyev’s life. “It is not journalism. It is not literature [written] to criticize someone,” he said. “If someone blames us for not doing so, I have doubts about the professionalism of those people. We have an objective approach, which includes a description of events.”

More publications could soon be in the works. “[A] detailed approach” to the study of Heidar Aliyev is needed next, Bahramov said. “From now on, we will study the work of Aliyev in the economy, art, science, oil, construction and so on.”

Mindful of the chaos that marked Azerbaijan in the early 1990s, when Aliyev returned to power in Azerbaijan, not all are critical of the idea. “The modern history of Azerbaijan is associated with Heidar Aliyev,” commented 29-year-old Anar Omarov. “He is the founder of such a powerful state, which exists today. … His legacy deserves academic research.”