Azerbaijan Threatens to Cut Off Military Cooperation With US and NATO 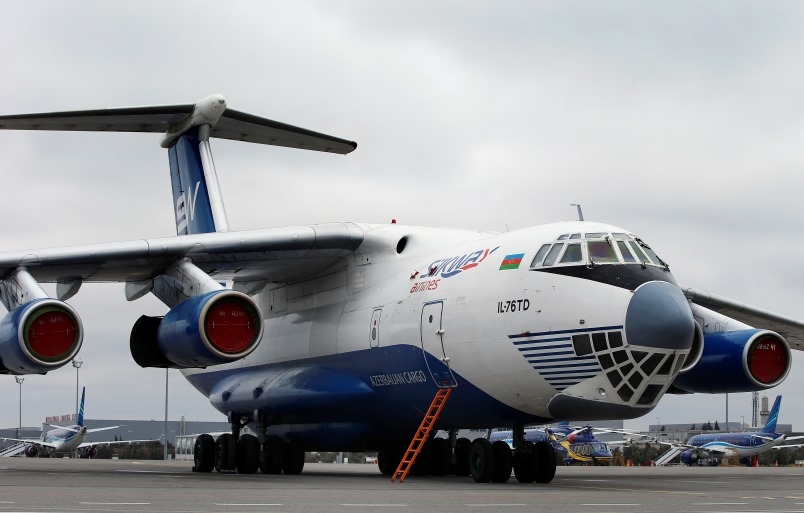 A Silk Way Airlines Il-76, part of the fleet that helps ferry cargo to Afghanistan for the NATO mission there. Azerbaijan has threatened to cut off that cooperation in retaliation for increasing pressure from the West on human rights and democracy. (photo: Silk Way Airlines)

Azerbaijan has threatened to cut off its military cooperation with the West in response to escalating pressure on Baku for its human rights violations. But that threat may ring hollow in light of Azerbaijan's declining importance for Western militaries.

United States Senator Richard Durbin on September 7 proposed sanctions against Azerbaijan. The move would bar entry into the U.S. of officials deemed connected to the imprisonment of Mehman Aliyev, the director of Turan, Azerbaijan's only independent news agency.

An article in the official newspaper Azerbaycan tied that proposal to a recent big investigative report showing the scale of Azerbaijani corruption in Europe; the article blamed "Soros-backed forces and the Armenian lobby" for "rush[ing] to make efforts to spoil the US-Azerbaijani relations and strategic partnership."

What recourse might Azerbaijan have? The article suggests that Baku could suspend its military efforts on behalf of the West:

According to the most recent data, Azerbaijan has a contingent of 94 troops in Afghanistan, part of the 12,813-strong NATO Resolute Support mission. That's less than one percent, and would be at most a minor inconvenience to NATO.

The logistical support has been in the past a significant aid to NATO and the U.S., but it's not clear to what extent that's still the case. The Azerbaijani press regularly cites the statistic that "[a]bout 40 percent of all cargo destined for the NATO mission in Afghanistan pass through Baku." But that only represents air cargo, which is a relatively small part of the logistics train into Afghanistan, most of which is carried out overland. And more importantly, the numbers are from 2011 and it's not clear what the new numbers are, but they appear to have declined substantially.

Zaur Shiriyev, an expert on Azerbaijan at Chatham House (and a regular EurasiaNet.org contributor), wrote in August:

Baku’s significance as a route for humanitarian supplies to Afghanistan for NATO and US forces no longer holds the same importance. Although the Trump administration has announced the deployment of several thousand additional US troops to Afghanistan, the US Joint Chiefs of Staff Chairman General Joseph Dunford has confirmed that the US doesn't see a "necessity to increase the access through Azerbaijan."

Azerbaijan's state-run Silk Way Airlines still does carry out flights on behalf of the US military to Afghanistan, as was revealed in the trove of documents leaked as part of a strange scandal connecting the airline to weapons shipments for Syrian rebels.

But Azerbaijan's token contributions to Western military efforts ultimately benefit Baku more than they do the West, as they signal Azerbaijan's desire to maintain a multivectored policy balancing out their reliance on Russia. That aura of strategic partnership, in turn, gets Azerbaijan's government a little more space to continue its crackdown on independent media and any other threats it perceives to its rule.

Just last week, in fact, Azerbaijan was showing off its friendly ties with NATO and the US as evidence of its strategic importance. A high-level military meeting between NATO and Russian generals, "demonstrated that Azerbaijan is a geopolitical link between Russia and the United States, having strategic relations with both countries," wrote news agency Trend in a commentary. "[T]he country has deservedly won the spot as one of the most important geopolitical centers of the region. Azerbaijan is a reliable and long-standing partner of NATO..."

Suspending that military cooperation, therefore, would probably backfire against Baku. The threat, more likely, is aimed at showing an internal audience that Azerbaijani is able to stand up to Western pressure. Whether or not that's true is another question.