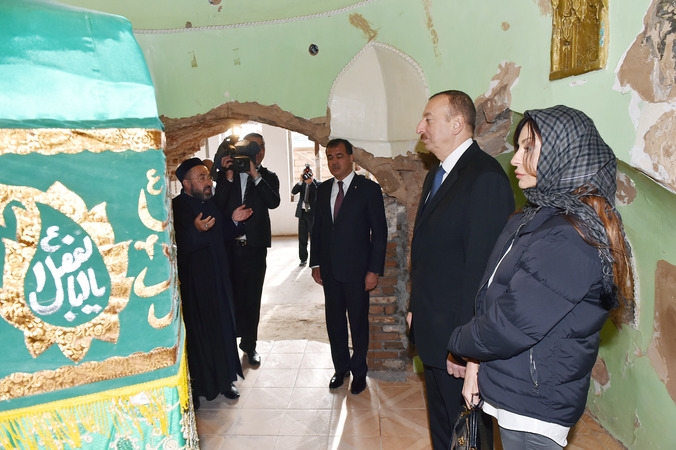 Earlier in October, Azerbaijani news media reported the death of a professional Azerbaijani wrestler, Rashad Bakhshaliyev, who was killed in Syria while fighting for the Islamic State. The news, which came as a surprise to many in Azerbaijan, underscores an emerging security threat for Azerbaijan.

Hundreds of Azerbaijanis are known to have joined Islamic State (IS) forces in Syria. Concern is starting to build that these battle-hardened jihadists could one day set their sights on challenging President Ilham Aliyev’s administration in Azerbaijan. Some prominent militants now fighting in Syria, most notably field commander Hattab al-Azeri, have already started verbally attacking the Aliyev government for its secularism and corruption.

Azerbaijan would seem to make an attractive target for IS jihadists. It is one of the few countries in the world with the Shia Muslim majority population, and the IS is virulently anti-Shia. On a geopolitical level, going after Azerbaijan would also seem attractive for the IS, given Baku’s links to Russia, the United States and Iran, three countries that are among the IS’ chief antagonists.

Azerbaijan itself would seem to present a vulnerable target. While it has a strong security apparatus, widespread corruption has weakened many state institutions in the eyes of the population. In addition, Azerbaijan is home to a substantial, indigenous community of Salafis, followers of a particularly puritanical interpretation of Sunni Islam. While not all Salafis are apt to become jihadists, jihadists have come from Salafi ranks. There is a danger that at least some non-violent Salafis may sympathize with the goals, if not tactics, of the jihadists and become radicalized.

Virtually unheard of in Azerbaijan until the early 1990s, Salafism has spread rapidly since. No credible data exist on the number of Salafis in Azerbaijan today, but their presence is relatively strong in the Sunni-majority northern parts of the country, the capital city of Baku and the town of Sumgait.

Several factors explain the rise of Salafism in Azerbaijan. First, the long legacy of official Soviet atheism warped the popular understanding of traditional Shia tenets, which for centuries had formed the moral and ethical bedrock of Azerbaijani society. The Bolsheviks created a spiritual void and inadvertently paved the way for more extreme religious beliefs to fill it once the communist system collapsed in 1991. It is noteworthy that in their efforts to denigrate the Shias, Salafis have made prolific use of derogatory depictions of religious figures, almost entirely Shia, in early Soviet films. Soviet atheists and post-Soviet Salafis may be strange bedfellows, but, working in tandem, they have succeeded in destroying the traditional religious underpinning of Azeri society.

Anti-Iranian policies carried out by various Azerbaijani governments since the 1990s have contributed to the spread of Salafism. After the breakup of the Soviet Union in 1991, isolating Iran was one of the explicit policy goals of successive American administrations. Officials in Baku at the time believed an alliance with the United States was essential for achieving their own strategic goals, namely regaining control of the Nagorno-Karabakh enclave. So Azerbaijan readily aligned its policies with a US-promoted regional framework that excluded Iran. This enabled Gulf states, including Saudi Arabia and Kuwait, through the establishment of charities and banks, to foster the spread of Salafi beliefs in Azerbaijan.

Throughout the 1990s and early 2000s, Azerbaijani authorities saw no reason to take action to check the spread of Salafism. If anything, they saw its proliferation as a healthy counterbalance to Iran’s efforts to export its influence to Azerbaijan. While pro-Iranian Shia elements have been openly critical of the Aliyev administration, Salafis in Azerbaijan have tended to emphasize loyalty to the government and have shied away from political activism.

In recent years, authorities have awakened to the potential Salafi threat. But addressing it now is infinitely more challenging than it would have been a decade ago. Salafis have a solid foothold in Azerbaijan, and at least some of them are prone to radicalization, as the steady stream of Azeris who have left their homeland to go fight in Syria and Iraq demonstrates.

It is clear that jihadists, especially those now engaged in Syria, do not recognize state borders and consider the entire Muslim world as fertile ground for the expansion of their self-proclaimed "caliphate." Thus, no Muslim-majority state should feel secure enough to ignore this threat.

The Aliyev administration in recent years has ruthlessly persecuted independent journalists and civil society activists, and the pace and scope of its crackdown has intensified in 2014. Over the same period, Baku has occasionally clashed with the United States and European Union, in particular Germany, over what Azerbaijani officials contend are the West’s “double standards” on human rights. These policies merely weaken Baku’s ability to address its most serious security threat – the metamorphosis of Salafism into militant Islam. Stability in Azerbaijan would be much better served if Baku focused on taking action that would diminish the potential for international and homegrown jihadism.