As a potential Russian gas crisis looms, Azerbaijan has promised to supply more gas to Europe "in case of emergency.” But it won’t be the answer to the crisis. 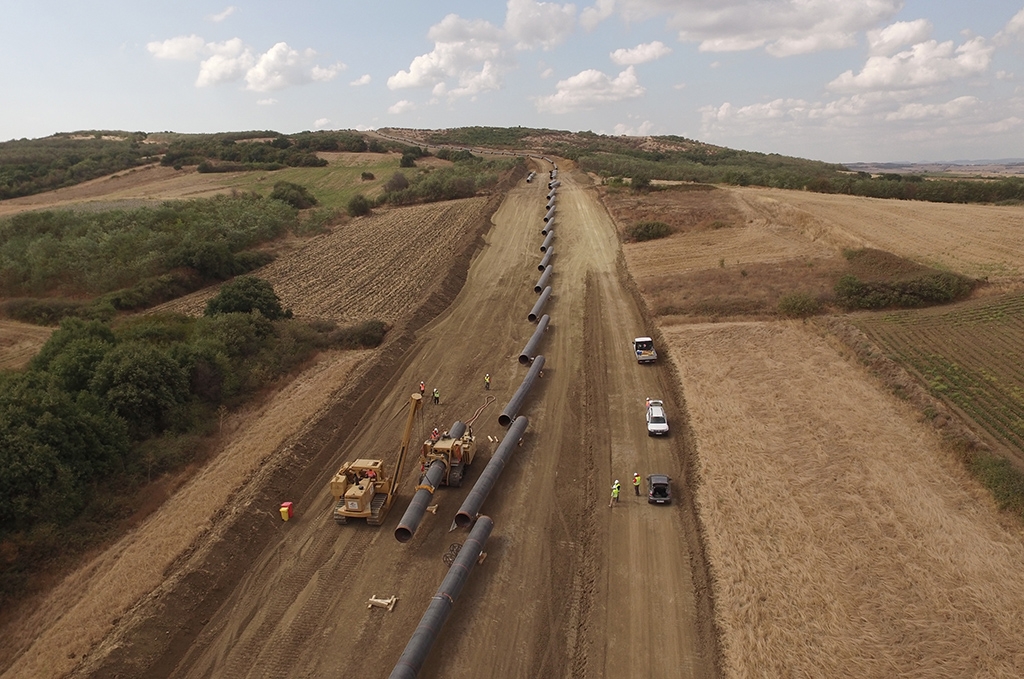 The TAP pipeline, under construction in northern Greece in 2016. The European Investment Bank has provided a loan that should ensure the construction proceeds on schedule. (photo: tap-ag.com)

As fears grow that Moscow may react to mooted western sanctions by halting gas exports to Europe, Europe and Azerbaijan are talking about how Baku may help by boosting its own gas exports westward.

The European Union’s foreign policy chief, Josep Borrell, confirmed on January 30 that Brussels was in talks with Baku. “We are prepared in case diplomacy fails and we are looking at all options,” he wrote. “This includes improving our resilience, including by working with partners like the U.S., Qatar and Azerbaijan, on the issue of gas supply in case Russia decides to reduce or halt deliveries.”

And Azerbaijan’s ambassador to the UK, Elin Suleymanov, said Baku was game.

“If there is an urgent need as we saw in Turkey, some volumes of course would be made available,” he said in an interview with Bloomberg. “But Azerbaijani volumes are not equal to the Russian volumes, that’s obvious.”

As Russia has massed troops on the Ukrainian border, the United States, EU and UK have vowed to respond to a potential Russian invasion by imposing punishing sanctions; Moscow has responded by saying that they would then turn off the taps and leave European gas customers to freeze.

But Azerbaijan’s ability to help is limited. And that is leaving aside the political sensitivity of Baku taking Europe’s side in a critical moment against Russia, with whom it has a close, if rocky, relationship.

Azerbaijan has been working for close to two decades to become a significant gas exporter to Europe, culminating in late 2020 with the commissioning of the Trans Adriatic gas pipeline (TAP) carrying Azerbaijani gas through Greece and Albania and across the Adriatic Sea to Italy.

But as Suleymanov suggested, neither Azerbaijan's current gas production, nor the pipeline infrastructure currently in place, have sufficient capacity to replace anything more than a tiny fraction of Russian gas exports to Europe, which totaled 158.5 billion cubic meters in 2020.

Azerbaijan's own gas production has long failed to keep pace with both its growing domestic demand and its increasing export commitments, and the country has for several years relied on periodic imports to keep things balanced.

As Suleymanov noted, Azerbaijan has just agreed to send extra volumes of gas – 4 million cubic meters a day during February – to Turkey to help its neighbor cope with its own gas shortages, the result of Iran unexpectedly cutting its gas exports.

That extra gas promised to Turkey appears to have been made possible only thanks to a three-way swap agreement with Turkmenistan and Iran, under which Iran imports between one-and-a-half and two billion cubic meters of gas from Turkmenistan annually, and exports the same volume to Azerbaijan.

And according to Azerbaijan's state oil company SOCAR, which is a major partner in both TAP and the Caspian Sea Shah Deniz gas field which produces the gas for export, that extra pipeline capacity is already spoken for.

While Suleymanov's promise of extra "emergency" Azerbaijani gas for Europe garnered worldwide headlines, less attention has been paid to his comments about how more gas could be delivered to Europe, and when.

Given the inability of Azerbaijan to quickly fill a European shortfall, Suleymanov emphasized the potential for expanding exports to Europe through future investment, in expanding both production and pipeline capacity.

“We don’t look at energy security and potential expansion and increase in volumes through a short-term crisis, you cannot succeed with short-term mandates,” he told Bloomberg. “It’s long-term planning, it is a process, it’s not like someone shows up and says ‘Give me more gas.’”

Azerbaijan has several gas fields in the Caspian either currently under development or awaiting the necessary investment while neighboring Turkmenistan boasts, according to some estimates, the fourth-largest gas reserves in the world at 19.5 trillion cubic meters.

As a landlocked state whose routes to market are blocked by other gas exporting nations, Turkmenistan's gas reserves are mostly undeveloped.

However, an agreement last year between Turkmenistan and Azerbaijan over joint development of the once-disputed Dostlug field in the Caspian could see the two rivals join forces to provide more gas for export.

Another project, backed by U.S. investors, for a Caspian gas pipeline also offers opportunities to boost the volume of gas available for export to Europe.

More available gas, coupled with a European market hungry for alternatives to Russian exports, would provide a strong investment case for expansion of the TAP pipeline, doubling its capacity to its theoretical maximum of 20 billion cubic meters per year.

According to SOCAR, the TAP consortium is currently conducting market studies and could make the decision to invest in expanding capacity this year.

But this wouldn’t happen overnight, and it could be several years before any extra Azerbaijani gas – even the comparatively small volumes TAP can carry – becomes available to European markets.