The new media law would impose many new regulations on the country’s already heavily controlled media. 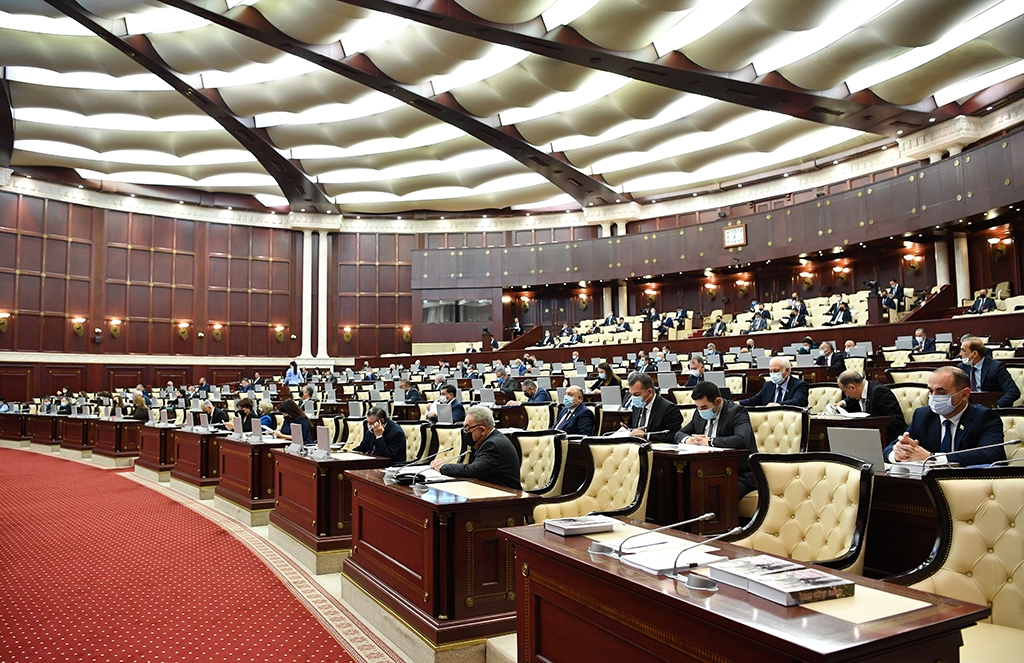 Azerbaijan's parliament, at a December 14 session during which they passed a new, restrictive law on media. (photo: meclis.gov.az)

Azerbaijan’s parliament is considering a new law that would impose sweeping new restrictions on the country’s media.

On December 14, the draft bill, known as “On the Media,” passed its first reading in parliament and appears destined to become law.

The new law has been expected since President Ilham Aliyev created a new organization, the Media Development Agency (MEDIA), in January and ordered it to draft and submit a new media bill in two months. But there had been no subsequent news about the bill until a draft of it leaked to some news outlets a few days before it was taken up in parliament.

Among the many new regulations: The state will now create a registry of journalists, who have to fit specific criteria (including lack of a criminal record) to be included. Owners of media outlets will have to live in Azerbaijan, which would effectively ban many of the country’s independent media which are run by Azerbaijanis who fled the country’s already repressive media environment. Online news outlets will be required to publish at least 20 news pieces on a daily basis.

There are also a wide variety of content restrictions in the new law. Journalists will be prohibited from “propagating superstitions.” “Tarnishing a business’s reputation” will also not be allowed. Section 14.1.11 stipulates that “facts and events must be interpreted impartially and objectively, and one-sidedness must not be allowed.”

The intent appears to be to give the government more freedom to block media it deems unfriendly.

“Overnight, the court can rule a block” on an online outlet, media lawyer Alasgar Mammadli said in an interview with the news outlet Kanal13. “Then you won’t have access to audiences in Azerbaijan, only abroad.” Many large media not controlled by the government are already blocked inside Azerbaijan, including Meydan TV, RFE/RL, and the newspaper Azadliq.

There also is a wide variety of new red tape that media have to deal with in order to get formally registered. “If you applied to get a job in government, it would probably take less time and effort,” Mammadli said.

One new regulation: journalists must have a labor contract, which could affect freelancers.

“Do journalists absolutely need a labor contract?” journalist and media trainer Seymur Kazimov asked in an interview with local news outlet Toplum TV. “These are backward, anti-democratic approaches. It means the law will give my interviewee the right to ask me first if I have a labor contract.”

"The new bill will play an important role in eliminating a number of shortcomings that exist today in the field of media,” said Sahil Karimli, the deputy editor-in-chief of the news agency Trend. “It provides all the details, from raising the level of professionalism of journalists to solving their social problems. One of the main issues is associated with the presence of so-called ‘random’ journalists and media outlets in this area today. The new bill covers these issues as well.”

During the discussion of the law in parliament one member, Javid Osmanov, dismissed critics of the bill as “anti-national forces” who were doing the bidding of Armenia. “Just as Azerbaijan won the Patriotic War, it will win the information war,” he said.

Azerbaijan’s media is already heavily controlled. In the most recent version of the World Press Freedom Index put out by Reporters Without Borders, Azerbaijan ranked 167th out of 180. In the post-Soviet space, only Turkmenistan ranked lower.

In that context, some journalists were fatalistic about the new law.

“The media is destroyed anyway,” Rovshan Hajibayli, the editor of Azadliq, told Toplum TV. “So what difference does it make to have a law on the non-existent media?”