The country is already home to a substantial cult of personality to the former president. Now it’s going to get bigger. 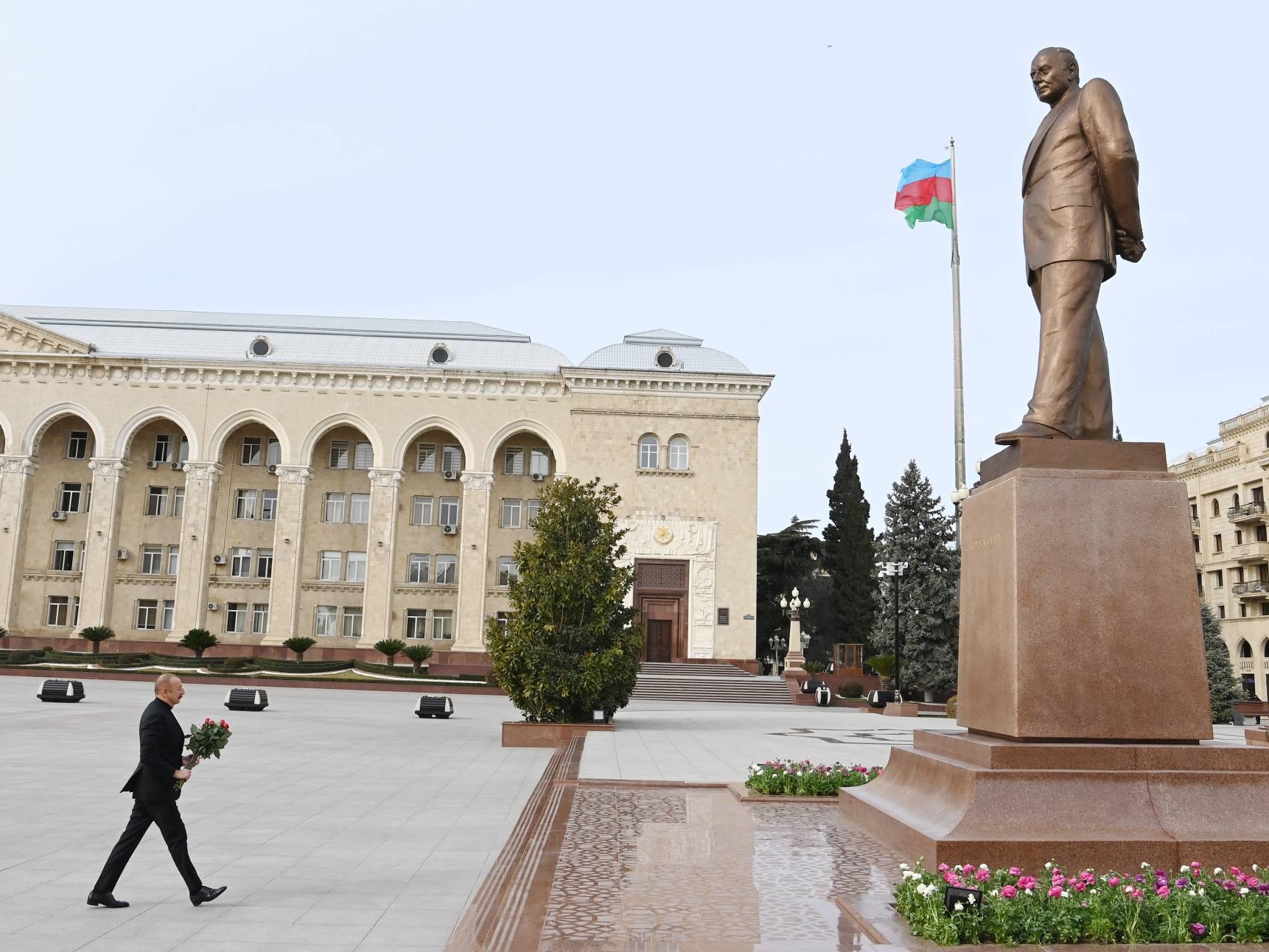 President Ilham Aliyev visits the monument to his father and predecessor, Heydar Aliyev, in Ganja in January 2022. (photo: president.az)

In Azerbaijan it is hard to miss Heydar Aliyev, the former president. His smiling portrait is ubiquitous in public places, Baku’s airport is named after him and there are countless parks, museums, concert halls and streets named after him across the country.

But starting next year, there is going to be even more: That year marks the 100th anniversary of Aliyev’s birth and his son, current president Ilham Aliyev, has declared 2023 to be the “Year of Heydar Aliyev” and announced an ambitious slate of activities aimed at honoring the man formally recognized as the “National Leader of the Azerbaijani people.”

The announcement of the “Year of Heydar Aliyev” was made in September, and on November 28 Ilham Aliyev released an 18-part plan for how it will be celebrated.

The agenda includes holding “local and international forums, conferences, symposiums, round tables and seminars” related to the Year of Heydar Aliyev; commissioning of documentary media devoted to the former president; events held around the country celebrating Aliyev; commemorative stamps and coins, new “Heydar Aliyev scholarships” for university students; tree-planting campaigns; and much more.

The item that has garnered the most attention has been the plan to institute “Heydar Aliyev lessons” in schools. While no other details were offered about the plan, it occasioned ironic reflections among some Azerbaijanis.

“The government is implementing innovations in the promotion of the cult of personality through the education system,” political activist Elmir Abbasov wrote on Facebook. He added a joke: “Probably they will decree prison sentences to those who do not study this lesson well.”

Heydar Aliyev is not new in the country’s educational curriculum. He has long been a dominant presence in the country’s history lessons, in particular, credited with rescuing Azerbaijan from the disaster it faced in the early 1990s amid an economic collapse, civil war, and the loss of much of the country’s territory to Armenia in the First Karabakh War.

The elder Aliyev then signed what became known as the 1994 “Contract of the Century” with Western energy companies to export the country’s substantial oil and gas reserves to Europe, paving the way for the economic boom that resulted. He died in 2003, and the same year Ilham succeeded him following elections widely regarded as fraudulent.

In recent years, the study of Heydar Aliyev has become more explicit.

In 2018, Baku’s local education department instituted lessons on "learning the heritage of Heydar Aliyev" for more than 20,000 11th-grade students studying in over 300 Baku schools.

The Baku department got a jump start on the Year of Heydar Aliyev; it announced on November 18 that lessons on Heydar Aliyev had already been added to the 11th-grade curriculum.

The first lesson took place in the district office of the ruling New Azerbaijan Party. The lessons will “serve to form students as individuals with national and moral values, healthy convictions, patriotism, modern worldviews, and to prepare them for independent life as adult citizens,” the department’s deputy chair, Huseyn Asgarov, said in one of the lectures.

It has become a tradition in Azerbaijan to declare each year in celebration of prominent historical figures or themes. This year is the Year of Shusha, dedicated to the city in Karabakh that was retaken by Azerbaijan in the 2020 war and since named the “cultural capital” of the country. The year before was the Year of Nizami Ganjavi, a 12th-century poet, marking the 880th anniversary of his birth.