Azerbaijan tries to balance between Ukraine and Russia

The government sent a shipment of humanitarian aid to Ukraine, while at the same time cementing closer diplomatic and security ties with Russia. 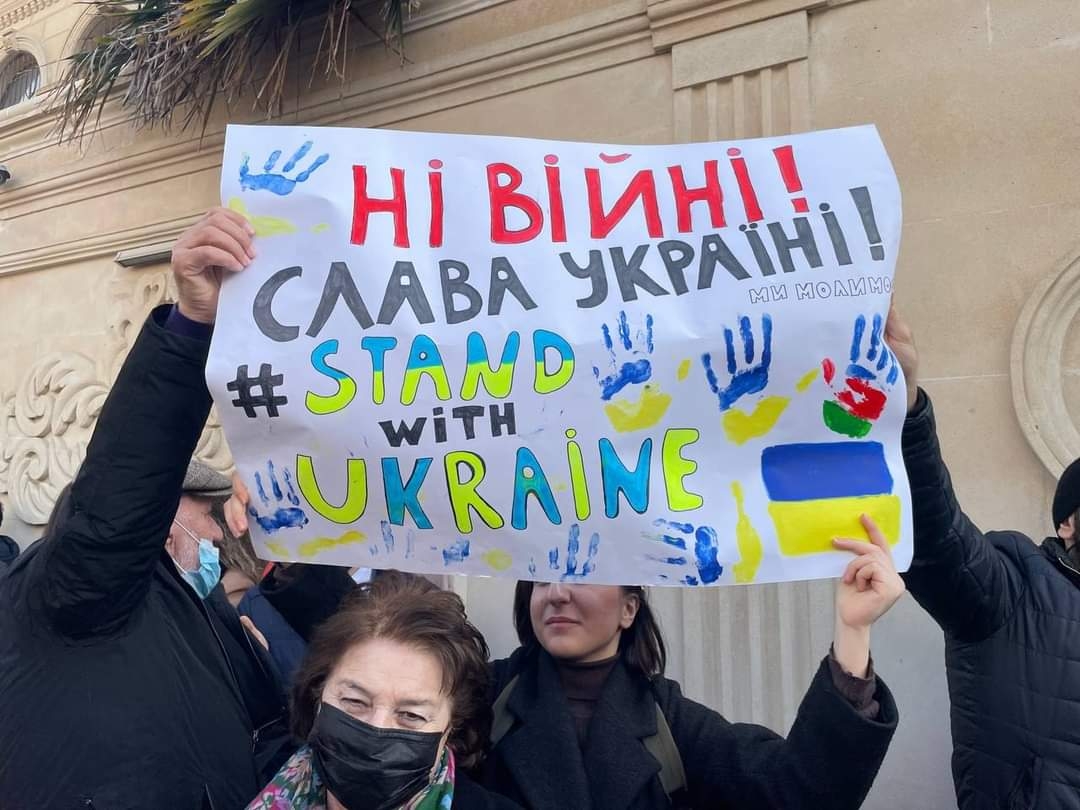 Ukraine supporters at a rally in Baku at the Ukrainian embassy. (photo: Ulviyya Ali, Twitter)

Amid Russia’s attack on Ukraine, Azerbaijan has been trying to maintain good relations with both countries, sending humanitarian aid to Ukraine just days after signing a treaty alliance with Russia.

Meanwhile, many Azerbaijanis have been discontented with what they see as their government’s conspicuous silence in the face of the invasion, and several hundred Azerbaijanis held a rally in solidarity with Ukraine, which was ultimately dispersed by the police.

On February 26, Ukrainian President Volodomyr Zelenskiy tweeted his thanks to Azerbaijan for supplying humanitarian aid to his country. That aid supply had not been previously made public in Azerbaijan, but several hours later local media reported that a plane from Azerbaijani air cargo company Silkway had transported 5 million euros’ worth of medicines to Ukraine.

Azerbaijan has particular ties with each country, which has helped determine its response to the crisis.

Baku’s relationship with Moscow is up-and-down, but took an up turn when Aliyev and Russian President Vladimir Putin met in Moscow and signed an alliance agreement linking the two countries’ foreign policies just two days before Putin announced the invasion. Also while in Moscow, Aliyev signaled that Azerbaijan intended to “cooperate” with Russia on gas exports to Europe; Russia has threatened to cut off Europe’s energy supplies and Azerbaijan had earlier suggested it could be a potential alternative.

Ukraine, however, is also a strategic partner to Azerbaijan, and has long publicly supported Azerbaijan’s territorial integrity – that is, its right to the territory of Nagorno-Karabakh, over which Azerbaijan lost control to Armenian forces in a war in the 1990s. When the second war between the two sides, in 2020, ended in Azerbaijan retaking much of that territory, Zelenskiy supported Azerbaijan.

The day before the invasion, Aliyev was asked in Moscow about his position on Russia-Ukraine tensions in a meeting with prominent Russian journalists. He demurred, replying that he preferred to withhold judgment as “it would be irresponsible of me to give a prognosis.” But he also spoke disapprovingly on the possibility of sanctions against Russia, saying he was sure that they would be “futile” as Putin has “probably calculated it all when he made the decision. … Russia is resilient against any sanctions with its potential, geography, and opportunities.”

On February 25, after the invasion had started, Aliyev’s senior foreign policy adviser Hikmat Hajiyev told state television that the events happening around Ukraine were “disturbing processes and should be solved by dialogue.”

The fact that Hajiyev and other officials stopped short of open support for Ukraine and condemnation of Russia dismayed many Azerbaijanis. “They should never again use the words territorial integrity and sovereignty,” one independent journalist, Sahila Aslanova, wrote on Twitter, referring to Baku’s regular talking points in defense of its position on Karabakh.

Ukraine’s Ambassador to Baku, Vladislav Kanevskiy, told BBC Azerbaijani on February 25 that Kyiv was still waiting to hear Azerbaijan’s position. “I’m planning to hold a series of meetings to learn the official Azerbaijani stance on the current situation. We addressed a request to the official bodies for that,” he said.

The news of the humanitarian aid shipment the next day cheered many who were supporting Ukraine. “When I read about Azerbaijan’s aid to Ukraine, I felt at ease, as if a burden was taken off of my shoulders,” wrote another Twitter user.

Azerbaijan’s balancing act between its two strategic partners was again displayed during a vote over terminating Russia’s membership in the Council of Europe. While 42 member states out of 47 voted to kick Russia out, Azerbaijan was one of only two countries which didn't show up for the vote.

Support for Ukraine was not expressed only online: On February 27, a demonstration was held in Baku in front of the Ukrainian embassy to show solidarity with Ukraine, where several hundred participants chanted slogans “Slava Ukraine” (Glory to Ukraine) and “Glory to Zelensky” as well as some criticizing Russia and Putin. As the crowd grew, the police stepped in and dispersed the demonstrators, telling them “nothing is going to change with your words,” participants reported.

The government appeared to try to play down the import of the rally.

“Holding a protest like this isn’t against Russia,” one pro-government member of parliament, Elman Nasirov, told local news outlet Pravda.az. “If Russia were in the analogous situation, Azerbaijan would take the same steps. But now Ukraine is the side facing serious casualties.”

But the authorities are being cautious with respect to the protests against the war. On the day the war started, the police detained activist Elman Guliyev in front of the Russian embassy in Baku as he read a statement denouncing the war.