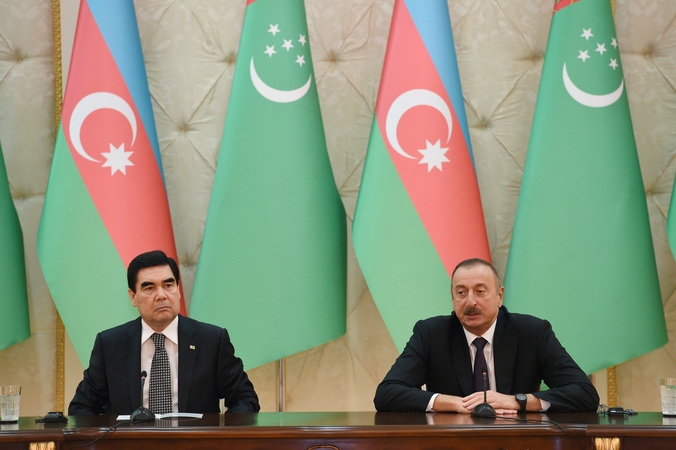 Azerbaijan and Turkmenistan have declared themselves strategic partners as the two sides try to cooperate on shipping energy to Europe while still in conflict over a disputed hydrocarbon deposit.

Turkmenistan President Gurbanguly Berdymukhamedov paid an official visit to Baku on August 8, where he met with his counterpart Ilham Aliyev. During two days of talks, the presidents discussed several key regional issues including the construction of the Baku-Tbilisi-Kars railroad, new ports on the Caspian Sea, and joint efforts to develop routes for transporting Caspian gas to European markets.

The two signed a strategic partnership agreement, and Aliyev declared ties between the two states to be “at the very highest level" and that they agreed on the need to "turn the Caspian space into a source of long-term stability in Eurasia, an arena for wide international cooperation."

But left unmentioned in the public statements was the as yet unresolved borders in the Caspian Sea, including the status of one hydrocarbon deposit — called Kyapaz in Azerbaijan and Serdar in Turkmenistan — that lies right along the contested border.

Both sides have tried to exploit the deposit for themselves. An abortive 1997 attempt by Azerbaijan’s National Oil Company and Russia’s Rosneft and Lukoil companies to develop the deposit delivered a major blow to relations between Baku and Ashgabat. Turkmenistan later attempted to partner with Mobil to develop the deposit, but the American oil company backed out to avoid damaging its ties with Azerbaijan.

In 2008, the two sides reached an agreement not to carry out any hydrocarbon exploration or extraction until the Caspian boundary status was resolved. However, the next year, Ashgabat threatened to take the issue to the International Arbitration Court. And in 2012, the Azerbaijani border service detained a Turkmen ship sent to carry out work on Kyapaz/Serdar.

This week’s summit comes amid geopolitical shifts that could provide a boost to Azeri-Turkmen cooperation, Caucasus expert Sergei Markedonov wrote. With the United States imposing sanctions on Russia and Iran, Azerbaijan and Turkmenistan sense an opportunity to become “the West’s privileged partners in the Caspian” and the “oil and gas alternative to Moscow.”

Turkmenistan has also faced a series of conflicts with Moscow over natural gas transit to Europe. Ashgabat is dissatisfied with the fact that Gazprom makes a significant profit from reselling Turkmen gas to Europe. Disagreements over gas prices led Gazprom to halt purchases of Turkmen gas in January 2016, leaving Ashgabat in urgent need of new partners.

Nevertheless, plenty of obstacles to Azerbaijan-Turkmenistan energy cooperation remain. Both sides remain wary of angering Russia and Iran, whose economic and political presence in the region is far greater than Europe's. This means their cooperation, for now, is destined to fall short of an energy alliance against Moscow and Tehran, Markedonov writes.

There are also other practical challenges. Turkmenistan wants to be connected to the Southern Gas Corridor from Azerbaijan to Europe. This requires the construction of the long-discussed Trans-Caspian Gas Pipeline (TCGP). Despite first being proposed in the 1990s, the pipeline itself remains a pipe dream.

Baku and Ashgabat insist that TCGP’s construction only requires the agreement of the countries on whose territory the pipes will be laid. Russia and Iran sharply disagree, insisting that until all legal questions surrounding the Caspian are resolved, the project requires all five countries’ support.

The tense situation surrounding the Kyapaz/Serdar deposit could also prove a stumbling block for Azerbaijani-Turkmen energy cooperation. On the eve of the Baku meeting, political scientist and Caucasus specialist Ilgar Velizade predicted that Azerbaijan would propose jointly developing Kyapaz/Serdar with Turkmenistan.

The two countries’ maritime border will certainly be “in the area of of the Kyapaz/Serdar deposit,” so “this issue must be concluded in order to further energy cooperation,” he told EADaily. So far, however, there is no indication whether Azerbaijan made such a proposal and how Turkmenistan responded.

With all these questions still open, Berdymukhamedov’s visit to Baku appears less a breakthrough than a first step.