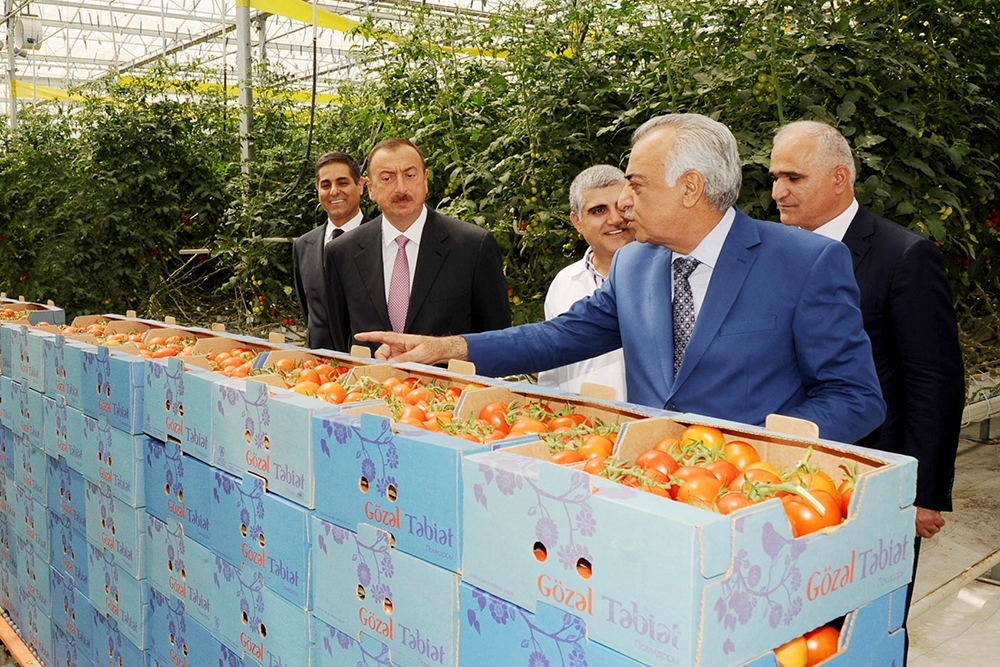 Azerbaijani President Ilham Aliyev tours a greenhouse complex owned by Azersun Holding in the Khazar district of Baku in July 2012. The devaluation of the Azerbaijani manat last December has forced many companies to cut jobs, including businesses in agriculture, banking, energy, and telecommunications. (Photo: Azeri Presidential Press Service)

Falling oil prices and a recent currency devaluation are spurring businesses to lay off workers in Azerbaijan. But, in a sign of the political sensitivity of the country’s economic downtown, some companies are keeping unemployment numbers under wraps.

Azerbaijan’s sudden economic plunge is forcing cuts at all kinds of enterprises, across all sectors. The list of government-connected entities that have announced layoffs include Azerenerji, the country’s largest electrical power utility; the gas-distribution network Azerigas, part of the state-run, generally cash-rich SOCAR energy company; and mobile phone operator Azercell.

In addition, seven private banks have closed over the past month after the Central Bank revoked their licenses. Culture and Tourism Minister Abulfas Garayev has even announced that “several museums will be closed because of ineffectiveness,” and warned that cultural organizations that receive government support, but post low “earnings” will be shut down.

While acknowledging job losses, some companies seem reluctant to discuss the underlying economic causes. Some attribute the layoffs to “reforms” or a “transfer [of employees] between departments.” Tellingly, numbers for the layoffs are often not made public.

In January, Labor and Social Welfare Minister Salim Muslumov stated that the government is aware of the problems posed by layoffs and will make vocational retraining available to those who lose their jobs.

So far, official data does not appear to reflect the downturn in the job market since Azerbaijan’s currency, the manat, experienced an almost 33-percent devaluation against the dollar last December. As it has for the past few years, Azerbaijan’s State Statistical Committee puts unemployment at 5 percent of the working-age population of roughly 5.8 million.

Government promises of job training and other benefits for the unemployed are ringing hollow to many in Imishli, a southern region with a population of almost 125,000, located along the Iranian border roughly 220 kilometers southwest of the capital Baku.

Imishli is the only Azerbaijani region this year that did not require government subsidies to meet its expenses. Even so, it has not escaped the collateral damage inflicted by the economic crash.

According to the regional government, 45 percent of the region’s revenue is generated by one sugar factory, part of a conglomerate that also produces limestone, plant oil and fodder. The factory, the Azerbaijan Sugar Production Association, is owned by Azersun Holding, a business operation that a report published by the International Consortium of Investigative Journalists indicated had connections to family members of President Ilham Aliyev. The president himself opened the 850-employee facility in 2006.

In December, management cut nearly 200 jobs, according to Azersun Holding spokesperson Afig Safarov, adding that those affected were sub-contractors. One laid-off worker told EurasiaNet.org the job market in the region is bleak. “Now, wherever I go for a job, I’m told to wait. … Unemployment was always a big problem here, but now it’s worse,” he said.

Even some of those who have a job complain that wages are not sufficient to keep pace with the rising cost of living. One state-sector worker in Imishli said he is unable to make ends meet on his monthly salary of 180 manats (about $115). “One should get at least $1,000 [per month] in order to be able to live in Azerbaijan. We have so many expenses,” he said. “Let’s give $115 [per month] to a minister and see how he can survive on that.”

Official data does not seem to take the sugar factory layoffs into account. As of January 2016, the latest date for which information was available, only 47 individuals were registered as unemployed in Imishli.

Until recently, profits from Azerbaijan’s abundant energy exports helped keep the issue of unemployment off the public’s radar, noted Parviz Heydarov, an economic expert at Baku’s Scientific Research Institute of Economic Reforms. Starting in 2004, Azerbaijan spent more than 50 billion manats (about $33 billion) to spur economic development in its regions. Those initiatives have had mixed results. And now, the government is not in position to spend as it once did, given that Brent crude, the international benchmark, has slipped under $33 per barrel, roughly 70 percent off its average two years ago.

Protests over the manat’s devaluation and rising unemployment have occurred throughout Azerbaijan in January.

In Ganja, the country’s second-largest city with a population of 313,200, a job fair turned into a protest on February 5 when applicants grew agitated that they would not receive job offers for one of the 750 positions reportedly available. Police stamped out the impromptu demonstration and the job fair was canceled.

To keep a lid on popular frustrations, the government is mulling fresh initiatives aimed at the agricultural sector, which employs roughly 37 percent of working-age Azerbaijanis. Azerbaijani officials are engaging Ukraine, China and Japan, among others, in discussions about various forms of agricultural cooperation.

In Imishli, an agriculturally oriented region, the government recently opened a “milk-collection facility,” co-financed with the US government, which could provide jobs for upwards of 1,200 people, Trend news agency reported. The regional government also plans to open a dairy farm that will produce cheese for export, a 20-million-euro ($21.9 million) project, News.az reported.

Even the sugar factory supposedly has expansion plans. Azersun Holding spokesperson Safarov maintains that the plant’s production rate of 1,000 tons per day will not drop, and that experts are looking for new projects to rehire those recently laid off, he said.