Azerbaijan: UNICEF and the European Games 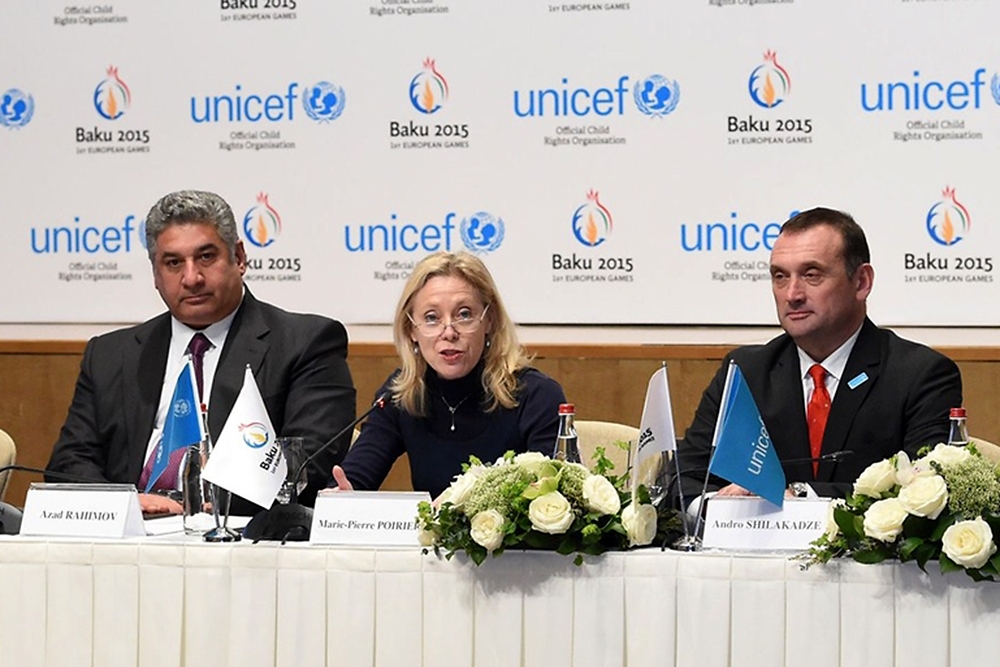 Among the sponsors of the Azerbaijan-hosted European Games, one is not like the others – the United Nations’ Children Fund, or UNICEF. The financial particulars surrounding UNICEF’s sponsorship are murky while the ostensible benefits it is providing in connection with the games are vague.

Founded in 1946, UNICEF does not receive funding from the UN’s budget; instead, it generates its own revenue, mostly via donations from governments, other international institutions and private entities.  Sports-related sponsorship deals also provide a relatively small amount of revenue for UNICEF. A three-year deal with the global football powerhouse FC Barcelona, for example, earns UNICEF 1.5 million euros per year.

UNICEF representatives were oblique when queried directly via email to explain how the agency agreed to become a European Games sponsor.

“UNICEF is partnering with the European Games within the broad context of its 2011-2015 Country Program,” Kristen Elsby, the agency’s regional chief of communications for the Regional Office for Central and Eastern Europe and Central Asia. “UNICEF makes decisions to partner with events on a case by case basis. Underlying all decisions is an assessment of how such partnerships can benefit the cause of children in an individual country or on a broader level.”

A representative of UNICEF’s office in the Azerbaijani capital Baku, writing by email, denied that the agency received a payment specifically for agreeing to be a European Games sponsor. When queried about sources of funding coming from within Azerbaijan, the representative provided a carefully worded reply.

“Partnerships are essential for UNICEF to advocate for the protection of children’s rights,” the representative wrote.

“Azerbaijan’s programs have been funded by the global organization’s regular resources, thematic funding and grants from the European Union,” the representative continued. “Within Azerbaijan, it [UNICEF] has not received any donations from the corporate sector or the government in 2015.”

The representative’s reply did not mention whether or not the UNICEF-Azerbaijan office had received any funding or pledges in 2015 from the Heydar Aliyev Foundation, an entity named after incumbent President Ilham Aliyev’s father, and run by First Lady Mehriban Aliyeva. The Heydar Aliyev Foundation is highlighted on UNICEF-Azerbaijan’s website as a partner under the stand-alone banner of “successful cooperation.”

The UNICEF-Azerbaijan website states that the Heydar Aliyev Foundation and the agency “plan to further develop relations and form a broader coalition of government agencies and the private sector to tackle a number of pressing issues concerning children.” The financial details surrounding the partnership are not disclosed.

The Heydar Aliyev Foundation at times has served as a vehicle to promote Aliyev family interests, as well as to burnish Azerbaijan’s image abroad, government critics contend.

Rights activists and transparency organizations assail the Aliyev administration in Azerbaijan as one of the most repressive and corrupt on earth. Over the past two years, authorities in Baku have intensified a crackdown on individual liberties that has left virtually every prominent domestic government critic either in prison or in exile.

When it comes to the European Games, activists say the sponsorship has highlighted a paradoxical position for UNICEF in Azerbaijan: how can an organization dedicated to protecting children’s rights be associated with a country that brutally represses the freedoms of adult citizens?

Representatives of Human Rights Watch and other rights-oriented groups assert that UNICEF is being used by the Aliyev administration to “whitewash” its unsavory reputation for thuggish political behavior.

“Clearly, UNICEF works in (and thus with) many countries with dubious human rights records – that may well be necessary to deliver services on the ground in these places. But this kind of collaboration on a mega-sporting event seems to be something else entirely,” Human Rights Watch spokesman Andrew Stroehlein told the Organized Crime and Corruption Reporting Project. “We can only hope UNICEF will raise in public and in private the issue of Azerbaijan’s political prisoners and push for their release.”

UNICEF representatives indicated that the organization had no intention of touching the issue of political prisoners, or anything else relating to the domestic political situation. “UNICEF is using the opportunity of the European Games to put a focus on safe and inclusive sport for all children in Azerbaijan,” the agency’s Baku representative wrote.

“We see sport as a powerful enabler to foster social inclusion for all children in Azerbaijan,” added Elsby, the regional UNICEF communications chief.

UNICEF representative offered few specifics about how the agency in Azerbaijan intends to promote children’s rights and social inclusion. The Baku office has a track record of poor management and faulty strategic planning that does not inspire confidence that European Games-related projects will be properly implemented.

A review of UNICEF’s Azerbaijan office, conducted in late 2014 by the agency’s Office of Internal Audit and Investigations (OIAI), identified numerous operational flaws, including poor strategic planning, inadequate project management, improper financial oversight and inaccurate reporting on project implementation. In addition, the review found that the Azerbaijan office had a $6 million “funding gap” for its 2011-15 program period.

Spot checks of financial transactions and donor reports found such activities were “inadequately documented,” according to the OIAI report.

“The audit tested two sampled donor reports,” the OIAI report stated. “The audit noted that the reported achievements were inadequately corroborated by supporting documentation or field visits.” A sampling of four financial transactions similarly found that there was insufficient information to “ensure the funds were used for intended purposes.”

In response to the audit’s findings, the UNICEF-Azerbaijan office agreed to make substantive changes, including a commitment to “establish a process to ensure that contracts are awarded on competitive selection and appropriately document justification for single-source selections.” It also agreed to establish clear project monitoring criteria, and that “key annual priorities are specific and measurable.”

In addition, the office’s management team pledged to hold meetings on a regular basis and that “scheduled meetings include [an] agenda, action points and assigned responsibilities for follow-up of action points.” Managers also vowed to concentrate “on strategic issues rather than routine and administrative matters.”

Editor’s Note: Justin Burke is the Managing Editor of EurasiaNet.org. This story includes reporting by Elizabeth Owen and Katya Kumkova.