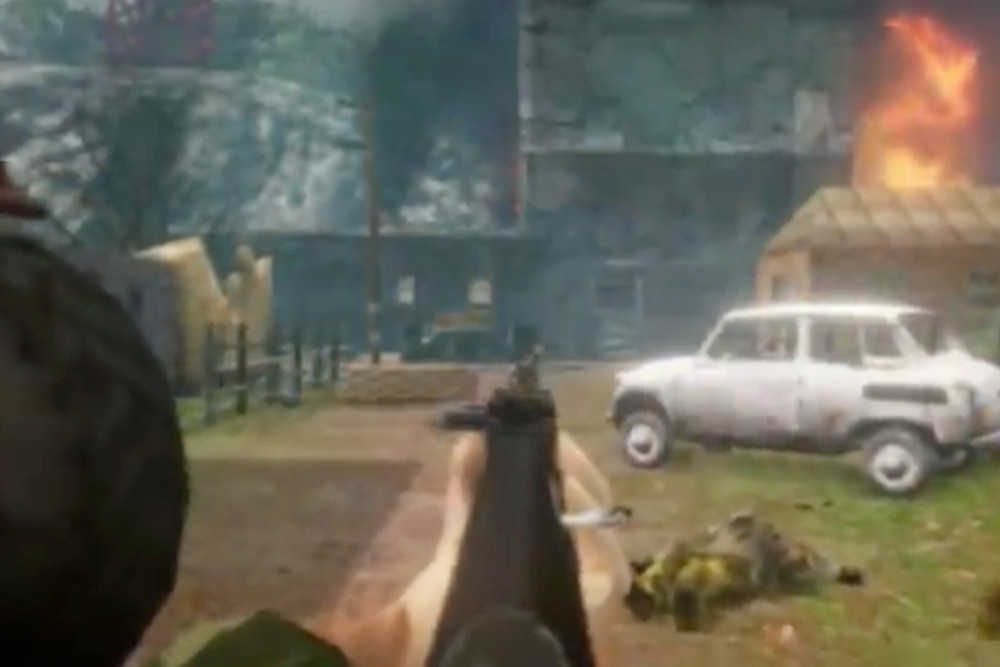 In the video game “İşgal Altında: Şuşa” (Under Occupation: Shusha) a player fights as an Azerbaijani soldier. (Screen grab from official game trailer)

Just over 20 years ago, during the spring of 1992, Armenian forces captured the city of Shusha in Nagorno-Karabakh, marking the turning point in the armed conflict between Armenia and Azerbaijan for control of the territory.

Today, youngsters in Azerbaijan have the opportunity to alter history via a video game called “Under Occupation.” The objective is to recapture Shusha from Armenian forces. Gamers assume the role of an Azerbaijani soldier who engages in virtual firefights with Armenian soldiers in house-to-house combat. The game is the brainchild of Farid Hagverdiev, a 19-year-old student at Baku’s State Oil Academy.

Hagverdiev based Under Occupation on popular first-person, shoot-‘em-up games, such as Call of Duty and Counter-Strike. Working with a team of developers recruited from among his classmates at the oil academy, he said the game took two years to go from rough concept to finished product. Hagverdiev added that the development team relied on self-financing (with generous parental subsidies), used home computers, and relied on a trial-and-error creative process. It is reportedly the first video game developed solely by Azerbaijani citizens.

Hagverdiev acknowledged that the motivation for developing the game went beyond a simple desire to entertain. There was also a political element to the project. “By creating the game we wanted to support the patriotic spirit in our youth, which I hope we accomplished successfully,” he told EurasiaNet.org. The game, which can be downloaded for free, has gotten a successful reception from Azerbaijani gamers.

While the video game may have been an independent initiative, government officials have latched onto it, viewing it as a means of raising awareness about the Nagorno-Karabakh issue among Azerbaijani young people, and of mobilizing support for ongoing governmental efforts to recover the territory.

In a sign that the game enjoys the full approval of President Ilham Aliyev’s administration, the Ministry of Youth and Sports organized a formal presentation of Under Occupation. The event, which occurred earlier this summer, was held at the Hyatt Regency, one of Baku’s swankiest hotels.

Talks on a political settlement for Nagorno-Karabakh have long been stalemated. In recent years, Azerbaijani rhetoric concerning the territory has grown increasingly bellicose. The video game dovetails with the government’s effort to keep the patriotic mood at a slow boil.

Under Occupation is not for the faint of heart: there’s lots of killing and computer-generated gore. To a great extent, it’s a celebration of violence: to advance, players must handle a variety of tasks, including shooting lots of Armenian enemies, rescuing a wounded Azerbaijani soldier, retrieving a document and blowing up a building in the town of Shusha.

The game’s scenery closely resembles to Shusha’s actual appearance. Prominent landmarks, including the House of Culture, the Govhar Agha Mosque, Vafig Mausoleum and the city gate, all make an appearance. Although born after the city’s capture by Armenian troops, and the subsequent expulsion of Azerbaijani residents, Hagverdiev managed to recreate the city by relying on old photographs.

Whether or not the video game can have a tangible effect on the Karabakh peace process is the subject of debate. Some experts doubt that a video game can cause a substantive spike in aggressive sentiment in Azerbaijan. “Not enough research is available to suggest that shooter games promote any more active hostility than the current events themselves,” said Tom Parker, a former policy director at Amnesty International.

Hagverdiev and his fellow developers, meanwhile, are now contemplating a new game-related venture, one that would aim to make them some money. “We’re graduating college soon, and we do not wish to mooch off our parents forever,” he said.

Nino Gojiashvili served as an editorial associate at EurasiaNet.org