Azerbaijan: Wielding a Stick While Searching for Carrots 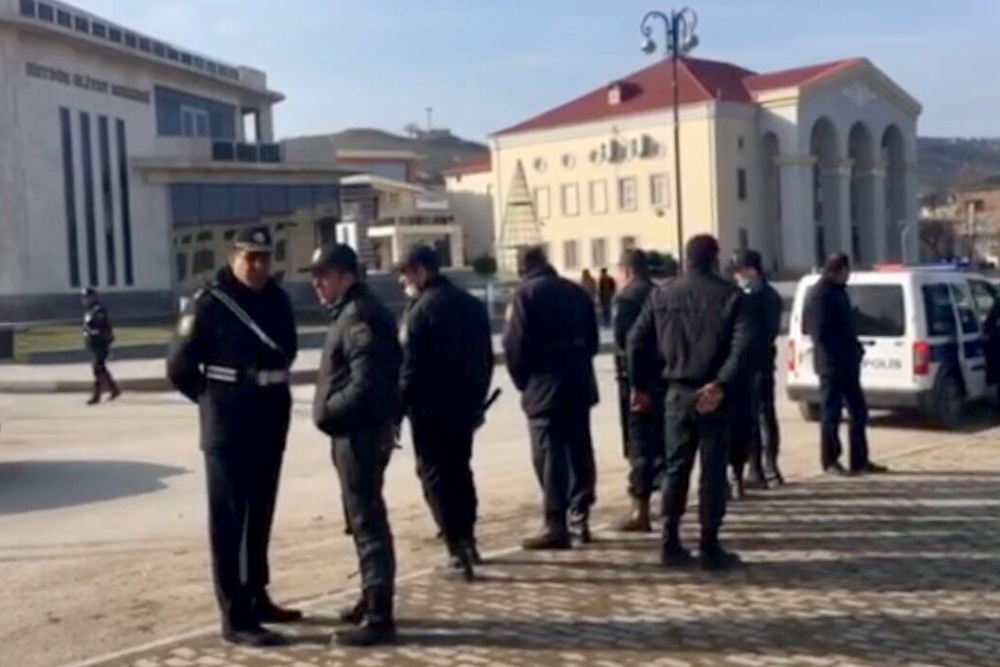 Security forces, including police and military personnel, descended on the Azerbaijani town of Siyazan to put a stop to the Jan. 12 and 13 protests over high prices, unemployment and a currency devaluation. More than 50 people were reportedly arrested in the town of 40,000 that now has police checking every car that comes or goes. (Video Frame Grab)

Authorities in Azerbaijan have managed to contain protests over declining living standards – for now. But with government finances in a precarious state, and the economy rapidly deteriorating, government critics are wondering how long the lid can remain on discontent?

The coastal town of Siyazan, situated roughly 64 miles (103 kilometers) north of the capital, Baku, was the scene of the most intense protests on January 12-13, with 55 arrests being made there.

These days, one can see a police officer standing beneath just about every street light in the center of town, which has roughly 40,000 inhabitants. On the outskirts, a joint military-police post stands barricaded by sandbags, and authorities check every car entering or leaving town.

People congregating near taxi stands or elsewhere in the center tend to disperse at the sight of a policeman. Some town residents are still being arrested. Yet while police can prevent crowds from forming, they are not able to stop people from engaging in impromptu conversations with each other in public spaces about rising prices, joblessness and other sources of economic distress.

Official statistics indicate that Siyazan has an unemployment rate of nearly 74 percent, but many believe that figure under-reports the severity of the situation because not every unemployed person is officially registered. Azerbaijan’s official unemployment and poverty rates stand at about 5 percent.

The government claims that it has poured tens of billions of manats into the regions for development, but many residents in Siyazan, located on a main transportation link to the Russian border, say they have not seen the effects of government spending.

Twenty-five-year-old Siyazan resident Mahir Huseynov claims he has not been able to find a job since finishing high school. “We were there to tell [officials] about our problems,” Huseynov said, referring to the mid-January protests. “But the police detained us immediately. The police threw tear gas into crowds they couldn’t arrest.”

Some protestors were detained in the streets, while others were taken by force from their homes, locals say. “Police check social media and news sites in order to find the protestors they missed seizing in the demonstration [on January 13],” alleged one town resident, who declined to be named or photographed.

“There was a masked guy who asked me what I’m doing there. I told him I can’t earn a living, and now prices are getting higher and higher,” recounted the individual. “I could hardly finish my sentence; they took me into a police car. There were photos of protestors taken from the media hanging on the wall inside the police station. The police said they are going to find them and bring them to prison.”

In a joint statement on January 13, the Interior Ministry and General Prosecutor’s Office alleged that Siyazan protesters had “grossly” violated “public order, disobeyed the legitimate demands of the government’s representatives and committed illegal actions.”

Riot police and Interior Ministry troops used tear gas and rubber bullets to disperse the protesters. “On that day, none of the doctors went home,” commented one local schoolteacher, who spoke on condition of anonymity to avoid losing her job. “Some of them were taken to the police station; some were at the hospital to help people. A lot of people suffered from [tear-] gas poisoning.”

Representatives of the Siyazan municipal government declined to answer questions about the protests. “We can’t talk to the media without permission from the top,” a government employee said.

Officials in Baku have blamed the opposition Popular Front Party of Azerbaijan and Musavat Party for organizing the mid-January demonstrations. Initially, some officials also made vague references to “religious radicals,” but authorities have not elaborated on the supposed radical connection in recent days.

In Siyazan, police detained local Musavat chairperson, Fakhraddin Abbas, and a senior party advisor, Mardan Mekhmu. The two were released after being warned not to leave the country, news agencies report.

While strong-arm tactics can probably succeed in keeping the protest mood in check over the short term, the government’s ability to ensure stability over the longer term will likely come down to the economic responses it can offer.

Officials’ room for maneuver has been greatly restricted by the precipitous decline of energy prices. Azerbaijan has long been dependent on the profits generated by energy exports. But now – with Brent crude, the international benchmark, standing at just under $29 per barrel on January 19, the government is no longer capable of throwing money at social problems to make them go away.

In a sign that President Ilham Aliyev’s administration is concerned about the future, the country’s rubberstamp parliament on January 19 imposed a 20-percent tax on certain foreign-currency outflows, granted a seven-year exemption from customs duties for investors in “priority” sectors and an income-tax exemption for personal savings accounts.

In addition, Aliyev decreed a 10 percent increase in pensions and some state-funded salaries, including for the police, effective February 1. He also called for greater attention to social-welfare issues. Other officials have indicated the 2016 state budget will need revision.

The Central Bank also may allow certain dollar-denominated loans to be paid off at the more favorable, pre-devaluation rate of 1.05 manats per US dollar — a 55 percent difference from the current exchange rate — news agencies reported.

While such moves could buy authorities some time, the question remains whether the government has the money to meet its new commitments.

Aliyev seems sure that the government has sufficient resources. “Azerbaijan can easily cope with the difficulties [of lower oil prices] if the instructions given … are followed,” the president asserted.

The source of much of the government’s revenues, the State Oil Company of the Republic of Azerbaijan, does not appear as optimistic as the president. On January 18, company representatives gave investors eight days to redeem $500 million in corporate Eurobonds set to mature next year.

Opposition leader Ali Kerimli, head of the Popular Front Party of Azerbaijan, contends that the government’s response is inadequate.

In Siyazan, an elderly man waiting in line at an ATM said a pension increase would do little for him. With a wife, two sons, a daughter-in-law and grandson to support, “[t]his pension of 174 manats [$111] is not enough even for five days’ food.”

“What should I pay for with this money? Electricity? Gas? Water? Medicine? Or food? It has become impossible to survive in Siyazan,” the man said.

Durna Safarova and Islam Shikhali are freelance reporters who specialize in writing about developments in Azerbaijan.