Azerbaijan, Without Explanation, Drops Out of NATO Exercises 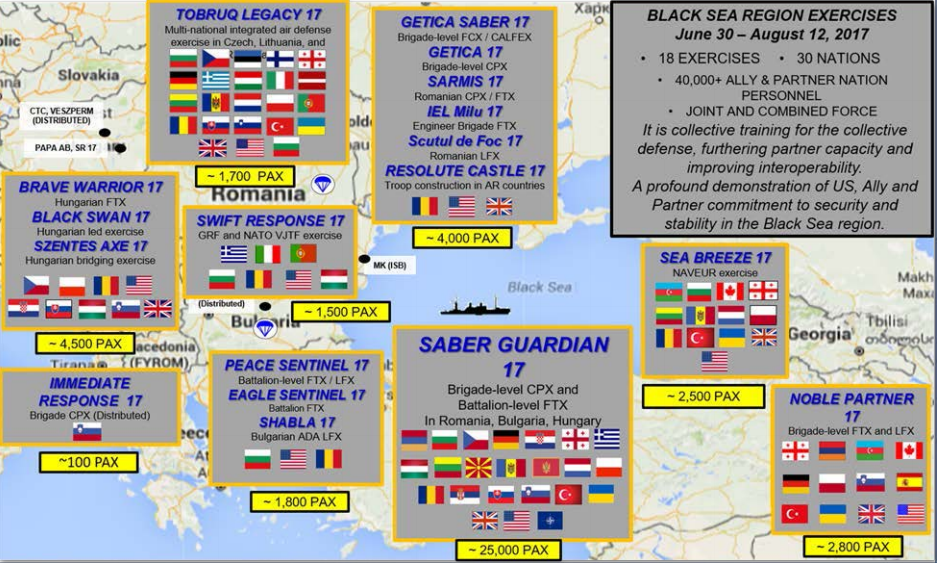 A U.S. Army graphic of all the exercises taking place around the Black Sea this summer. Armenia is taking part in some of them, but Azerbaijan isn't.

When NATO military exercises kick off in Georgia next week, they will include troops from the United States, Germany, Turkey, Ukraine, and Armenia. But they won't include Azerbaijan, an unexpected, last-minute dropout.

Azerbaijan also didn't participate in another set of recently concluded NATO-affiliated drills in Romania, although in past years they had participated in several previous iterations of the drill. Armenia, meanwhile, took part for the first time in the exercises, under the rubric Saber Guardian

It's not clear why Azerbaijan dropped out of the exercises in Georgia and the Black Sea. There has been no official explanation, and neither the Ministry of Defense nor the Ministry of Foreign Affairs responded to The Bug Pit's request for comment.

The exercises are all part of a huge series of NATO drills around the Black Sea this summer in which about 40,000 troops are participating. This, naturally, has aroused Russia's ire. "All these deployments, including the incessant series of exercises, create an absolutely new configuration of forces near our borders, which in a substantial way not only worsen the security situation but also present a danger, a threat to Russia," said Russia's ambassador to NATO, Alexander Grushkov.

And Russian Deputy Foreign Minister Grigoriy Karasin accused Georgia of "aggressive escapades" and that "the exercises being conducted in Georgia with the participation of NATO soldiers do not inspire optimism and a sense of security in the region."

So it may seem unlikely that Armenia, by far Russia's closest ally in the South Caucasus and a member of Russia's anti-NATO, the Collective Security Treaty Organization (CSTO), is taking part in these aggressive escapades. It's not clear in what capacity or strength they're taking part -- neither the exercise organizers nor Armenia has given any details about what sort of units it's sending.

But it's common for Armenia to send small units to NATO exercises, and otherwise cooperate in limited ways with NATO. "No doubt, the CSTO and NATO pursue different goals, but... our practice shows that it is possible that a country finds ways for cooperation in different formats to ensure its national security," President Serzh Sargsyan said earlier this year.

The story of these exercise dropouts has been more or less ignored by the major Azerbaijani press, but one website quoted military analyst Uzeir Jafarov as saying that Armenia's presence at Noble Partner would justify Azerbaijan staying away. (It's worth noting, though, that Armenia wasn't in the Sea Breeze exercises which Azerbaijan also dropped out of, and both Armenia and Azerbaijan took part, without incident, in the NATO Saber Guardian exercises last year.) Another article, somewhat confusing the timeline of events, suggested that "Azerbaijan is not taking part in the exercises on its own initiative, and in its absence Armenia saw its chance to finally catch NATO's eye."