Eight years ago, the Azerbaijani government tried to make a hero out of a soldier who killed an Armenian soldier in his sleep. But now it wants to drop the subject. 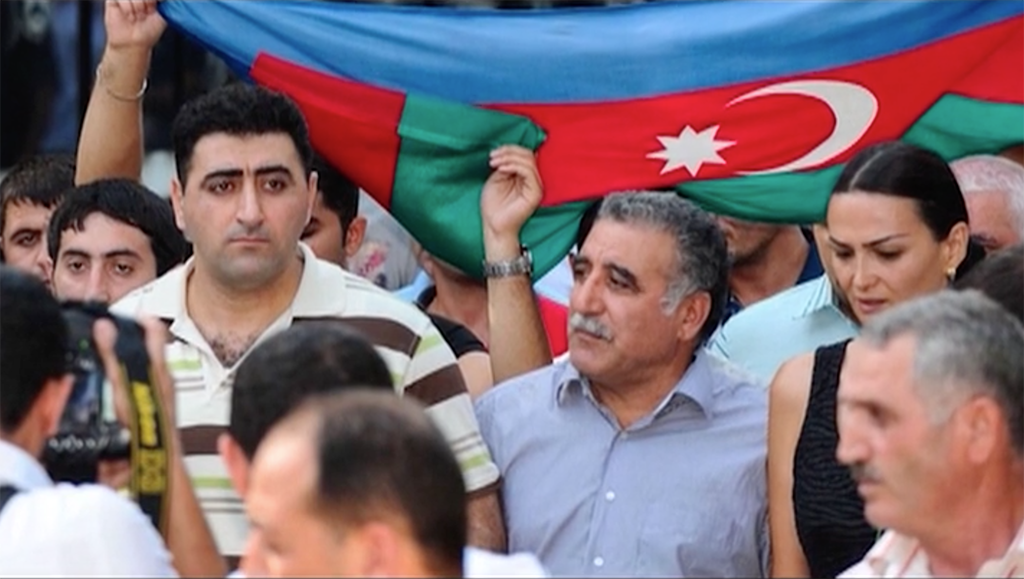 Ramil Safarov (left), being fêted on his return to Azerbaijan from a prison in Hungary. (Still from Parts of a Circle: History of the Karabakh Conflict, a film released last month by Conciliation Resources)

A recent European court ruling has returned to the spotlight a name many people in Azerbaijan had been trying to forget: Ramil Safarov.

Safarov is one of the most notorious characters in the conflict between Armenia and Azerbaijan. At a 2004 NATO English-language program in Budapest, Safarov killed Gurgen Margaryan, while the latter was asleep in his bed, with 16 ax blows to the head. Both men were lieutenants in their respective armed forces: Safarov for Azerbaijan, Margaryan for Armenia.

Safarov was convicted by a Hungarian judge and sentenced to life in prison, but eight years later – shortly after a visit by Hungarian Prime Minister Viktor Orban to Baku – he was extradited to Azerbaijan, where the government pardoned him, promoted him to major, gave him eight years of back pay and a new apartment, and fêted him publicly as a hero. The shocking reception resulted in broad condemnation from abroad and rage in Armenia.

Safarov’s time in the spotlight lasted about a year. “He was a hero until the 2013 presidential elections, he was used by the ruling party,” said Anar Mammadli, a Baku-based political analyst. After that, the government “lost interest” in Safarov, Mammadli told Eurasianet. That seemed to be partly the result of Safarov’s own disinterest in becoming a public figure, and in part due to the negative reaction from many Azerbaijanis who objected to the lionization of an ax murderer, Mammadli said.

Many Armenians, however, did not forget. To them, Safarov’s reception in Baku remains the most vivid illustration of why the Azerbaijani government cannot be trusted to peacefully resolve the conflict.

Safarov’s name is invoked regularly in Armenian public discourse. At a ceremony in January, Armenian Prime Minister Nikol Pashinyan cited the Safarov case. “Even today, perpetrators who committed atrocities against helpless people are regarded as heroes of Azerbaijan,” he said.

To many Azerbaijanis, the regular references to Safarov are inaccurate and unfair.

“In recent years, Ramil Safarov has dropped out of sight from the media,” said another Baku-based analyst, Shahin Rzayev.

“In my opinion, the heroization of Safarov in Azerbaijan has been exaggerated in Armenia. After he was freed, there was a time when this was a hot topic, but many in Armenia are convinced that Safarov is a ‘Hero of Azerbaijan,’ and he’s not.”

In 2013, relatives of Margaryan and another Armenian soldier whom Safarov attacked sued the governments of Hungary and Azerbaijan in the European Court of Human Rights, arguing that they bore responsibility for the attack. Seven years later, on May 26, the court announced its verdict: Azerbaijan was found to not be directly responsible for the murder. But the fact that Safarov was “glorified by high-ranking officials for his extremely cruel hate crime” had a “causal link to the Armenian ethnicity of his victims,” the court found.

The reaction to the verdict this week in Baku was muted. The Ministry of Foreign Affairs issued a statement which blamed Armenia for “politicizing” the case by taking it to court, and attempting to explain away Safarov’s crime by the fact that his family had been violently displaced during the conflict between Armenia and Azerbaijan in the early 1990s.

“[A]ccording to the European Court conclusion, Ramil Safarov acted individually while committing the acts and did not represent the government of Azerbaijan. Thus, the government of Azerbaijan cannot bear international legal responsibility for these actions,” the MFA spokesperson, Leyla Abdullayeva, said. “At the same time, we think that it should have been taken into consideration that … Safarov was born in the Jabrayil district of Azerbaijan occupied by the Armenian armed forces in August 1993 [and] he lost his close relatives in the war, and experienced pain and suffering of the life of an IDP as a teenager.”

Most Azerbaijani media, however, reported only on Abdullayeva’s statement and said little else about the case or Safarov.

Mammadli noted that social media posts from independent or opposition media on the verdict have been ignored by the “pro-government trolls” that regularly comment on those sorts of posts. “It means there is no order to start some kind of campaign,” he said.

“They [the government] have been trying to put [the Safarov case] in the past for a very long time now, but they trapped themselves,” said another Azerbaijani analyst, who spoke on condition of anonymity. “Safarov was useful to score some quick, big political points there and then, but it proved to be a mess in the long term. They just can't go back on it now.”

Asked about Safarov, Farid Shafiyev, the head of a government-run foreign policy think tank, complained that this reporter was “picking the wrong apple” and that “the Ramil Safarov case is just another pretext to channel attention to an old matter.”

Even Safarov’s wife, in a Facebook post about the verdict, did not attempt to justify his acts, instead focusing on what she described as Armenians’ hypocritical approach to his case. She cited several instances in which Armenians glorified the killers of Azerbaijanis or Turks and recounted a conversation with an Armenian 10 years ago in which she mentioned the victim and her interlocutor didn’t recognize the name.

“It was then that I understood that Armenians forgot about Gurgen a long time ago, they don’t care about him,” Safarov’s wife, Shabnam Safarova, wrote. “But they will never forget Safarov. This is what makes them strong – a sharp memory and a sense of national revenge.” (The post was private, but Safarova gave Eurasianet permission to cite it. She did not, however, respond to follow-up questions.)

One journalist, Elchin Alioglu, justified Safarov’s acts because he “knew the terrorism, savagery, sadism and insanity of the Armenian occupiers,” he wrote in a Facebook post. “It is permissible to kill someone who insults my nation and homeland and seeks to destroy my nation and homeland.”

Opposition activist Ulvi Hasanli wrote that the government’s treatment of Safarov “tarnished the image of the whole country” and was counterproductive to Azerbaijan’s aspirations to regain the territory it lost during the war with Armenia. “The government says that we will treat the Armenian community of Nagorno-Karabakh as our own citizens. […] What sane person would believe our government's appeal to ‘let’s live together and we will ensure your safety’"?

He concluded: “The other side has been using the Budapest massacre for many years, and now with this verdict they will use it more. The issue of Ramil Safarov could be dealt with in another way but this government, as it always does, did it in the worst possible way.”