Even the topic of stray dogs appears too sensitive for the authorities. 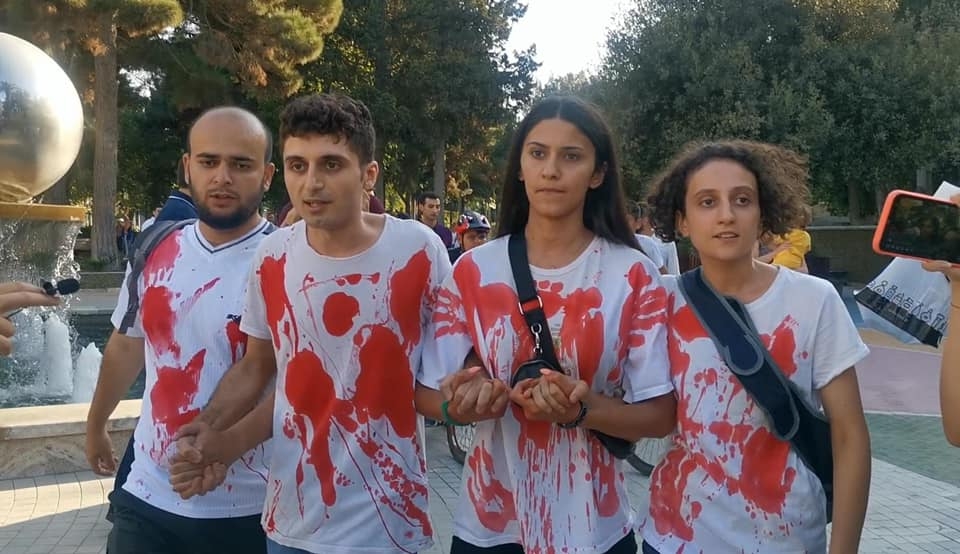 A threat to the regime? (Ulviyya Ali)

That Azerbaijan allows little room for debate of even non-political themes was made plain last week when a handful of animal-rights activists quietly marching in Baku’s Fountains Square were quickly kettled by police and detained.

The seven activists were wearing T-shirts sprayed with red dye to protest the culling of dogs at a state-run animal shelter. Before they could reach the square on August 6, police cars cut them off and detained two -- leading some to suspect they had been spied on. A few minutes later, the remaining five were kettled by police; three were detained in the square.

Within hours of their release, the three – Nijat Aza, Elkhan Mirzayev and Nijat Ismayil – again were detained, this time after an altercation with the owner of a leashed monkey who dresses the animal up and charges people to take photos with it. A court sentenced each to 15 days in jail. Several activists say they were abused in detention, pointing to their bruised necks and torn shirts.

Kamran Mammadli, who was among the detained, wrote on Facebook that police had repeatedly ignored complaints about the monkey owner even after previously arresting him for abusing the animal by knocking out its teeth so it cannot bite.

The dog shelter, named Toplan, was founded in early 2019 as a joint-project of the Baku city local government and the Heydar Aliyev Foundation. At the opening ceremony, the president’s daughter Leyla Aliyeva attended. Toplan’s mission is to catch stray dogs from the streets, sterilize them, and offer shelter until the animals can be placed in a home.

But shortly after Toplan opened, a video circulated on social media showing a Toplan employee kicking and otherwise abusing a stray animal. Toplan fired the employee, but activists have produced other evidence of abuse at the organization over the last two years.

Last month, activists held three protests outside Toplan demanding to enter the shelter and observe conditions inside. They failed each time.