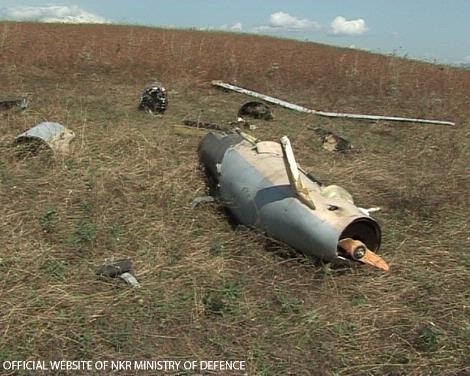 Armenian forces in the disputed territory of Nagorno Karabakh have shot down an Azerbaijani unmanned drone aircraft, they say. Azerbaijani officials thus far have been silent on the issue, but the Armenians have produced photos and video of the wreckage.

According to Armenian Reporter:

Vazgenashen, previously known as Gulably, is about ten kilometers from the Line of Contact (LoC) between the two armies. Armenian officials believe the aircraft was on a reconnaissance mission.

Karabakh military officials said there was a spike in Azerbaijani UAV activity in recent days most of it along the LoC. But an Azerbaijani intrusion at such depth can be considered a significant escalation.

The aircraft went down on September 12 at 7:30 AM local time near Vazgenashen in Nagorno Karabakh's Martuni district "as a result of special measures undertaken by units of air defense and radio-electronic warfare of the Karabakh Defense Army," the army's press office reported.

According to most early speculation, the drone was an Israeli-made Hermes 450. Armenian lobby groups in the U.S. have wasted no time; the Armenian National Committee of America has said it has identified parts on the UAV that are from a Canadian company with an office in the U.S., thus a potential violation of sanctions on arms sales to Azerbaijan (or Armenia). And it's written to Secretary of State Hillary Clinton to ask her to look into it.

It'll be very interesting to see how Azerbaijan responds.