The road closures represent the first time that Azerbaijani border guards, which have passively patrolled the road for months, have acted so assertively. The road between the Armenian cities of Goris and Kapan, near the Azerbaijani village of Eyvazli. Azerbaijani soldiers closed this section of the road on August 26, the Armenian authorities reported. (photos: Joshua Kucera)

Azerbaijani forces have blocked two sections of a major road through southern Armenia, Armenian officials have said, following what Azerbaijani officials said was an attack on an Azerbaijani soldier in the area.

Azerbaijani troops blocked the road near the villages of Karmrakar and Shurnukh at about 11 pm on August 25, Armenia’s National Security Service reported. The country’s human rights ombudsman, Arman Tatoyan, wrote on Facebook that the road was blocked by 50 or more Azerbaijani soldiers.

“Russian border guards, Armenian border guards conducted negotiations on the spot to open the road, and through their efforts civilian cars were taken out of the roadblock,” Tatoyan wrote. “This is a pre-planned and an openly hostile act. It is a crime against the civilian population of the Republic of Armenia.”

At noon the next day, Tatoyan reported that another section of the road further to the north, near the village of Vorotan, also was blocked. That road remains closed as of the time this article was published. Negotiations are expected to continue but the Azerbaijani side has not presented any demands, Gevorg Parsyan, the mayor of the region’s capital Kapan, told RFE/RL.

Following the end of last year’s war between Armenia and Azerbaijan, Azerbaijan regained control over large swathes of its territory, many of which abut or straddle Armenia’s main north-south artery through the region of Syunik. Azerbaijani border guards have since set up several border posts along the road, in sections where the road crosses into Azerbaijani territory, but until now have for the most part maintained a passive posture. Both of the sections they blocked appear to be in what both sides now effectively treat as Azerbaijani territory.

Azerbaijani authorities have yet to comment on the road blockage, but hours before they reported that an Azerbaijani soldier had been stabbed with a bayonet by two Armenian soldiers near Ashaghi Jibikli, which lies on the Azerbaijani side of the border between Karmrakar and Shurnukh.

Armenia denied the allegations, and Prime Minister Nikol Pashinyan called on Azerbaijan to hand over what evidence it had about the alleged incident.

In an August 26 address to parliament, Pashinyan said that a 21-kilometer section of the road crossed what he called “disputed territories” in some parts. He recited the text of a December agreement according to which Russian border guards would help ensure the security of the road, with Armenian and Azerbaijani border guards also on their respective sides.

He added that alternative roads in that area are being upgraded and that the issue will be for the most part resolved when the construction of a new North-South transport corridor, crossing the entire territory of Armenia, is finalized. 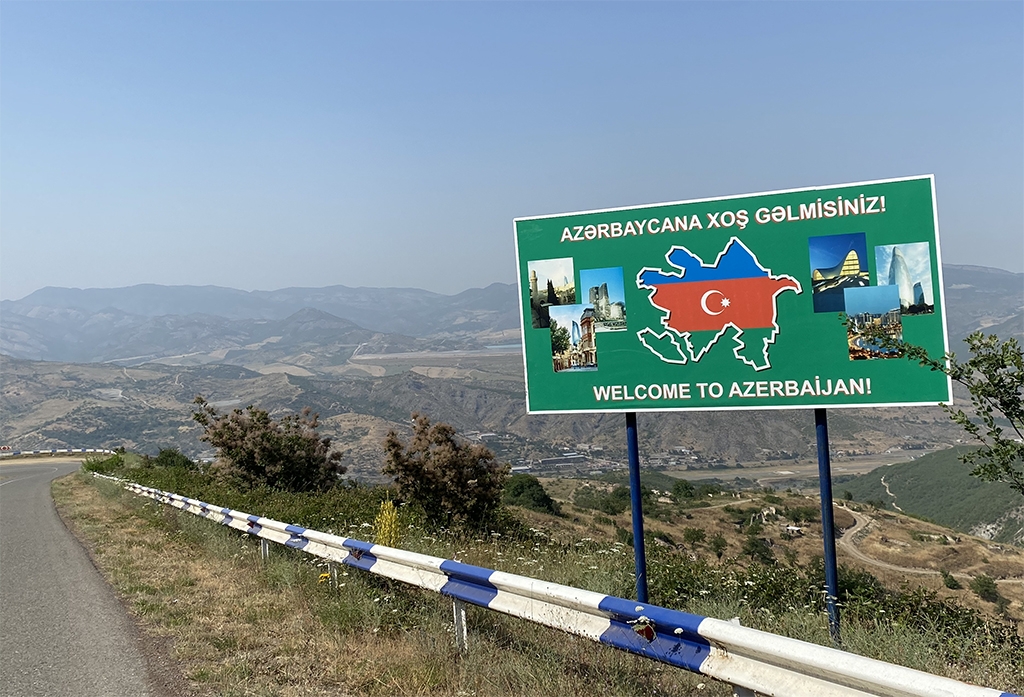 While many Armenian residents of the region have been alarmed by the presence of Azerbaijani border guards, as well as prominently placed Azerbaijani flags and signs reading “Welcome to Azerbaijan” on the sections of the road in their territory, Azerbaijani President Ilham Aliyev has said they have nothing to worry about.

Aliyev told journalists in February that the "welcome to Azerbaijan" sign on the road was "there to make Armenians driving through that road feel safe in Azerbaijani territory."

The road closure took place amid simmering tensions between the two countries, including regular skirmishes and exchanges of fire.

On August 25, an Azerbaijani soldier was detained in the town of Martakert in Nagorno-Karabakh. Police in the de facto republic reported that the soldier, Jamil Babayev, was found in a house in the town; he was charged with illegal border crossing and threatening the residents of the house, which included children.

Azerbaijan’s Defense Ministry confirmed that Babayev had crossed the line of control, and reported that Babayev had “voluntarily” left the psychiatric department of Ganja Hospital. "It is believed that our serviceman crossed into the territory controlled by Russian peacekeepers," the statement said.

Two days earlier, Armenia's Defense Ministry reported that Senior Lieutenant Artur Davidyan had left his position, crossed into Azerbaijani-controlled territory due to poor visibility and got lost. He has not been found yet. The ministry did not report which part of the border Davidyan had crossed.