Social media users have been outraged at an apparent attempt by school officials to cover up the circumstances around the girl’s death. 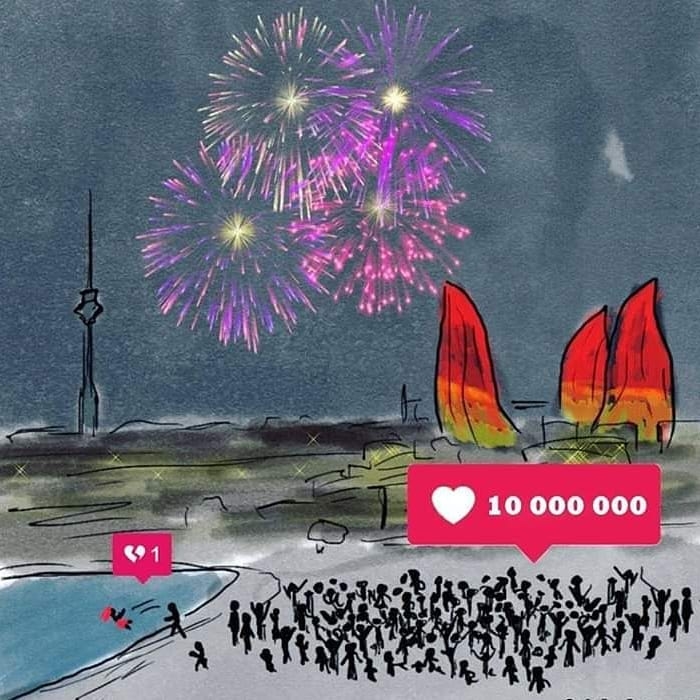 One meme that emerged after the suicide death of a teenaged girl in Azerbaijan amid celebrations that the country's population had reached 10 million. (illustration: Ruslan Abbasov)

The death of a 14-year-old girl has sparked a nationwide social media campaign against bullying and for the authorities to properly investigate the circumstances around the girl’s death. The outrage around the incident was such that government officials said that President Ilham Aliyev was said to be personally addressing it.

On April 4, Elina Hajiyeva jumped from a third-floor window at School No. 162 in Baku after reporting bullying by both students and teachers. According to some witnesses, school administrators quickly tried to cover up the incident. Zuleykha Shirinova, a friend of Hajiyeva, told news website baku.ws that “the director [of the school] ordered the blood to be cleaned immediately…after that, they took [Hajiyeva] and interrogated her while filming it.”

Videos have emerged on social media that show an injured Hajiyeva in the office of the principal after the incident. In these videos, administrators try to make a half-conscious Hajiyeva admit to suicidal tendencies and place the blame on family difficulties rather than bullying issues at the school. Nearly two hours after the initial attempt, an ambulance was finally called.

In the hospital, Hajiyeva entered a coma and then died two days later.

After the girl’s death, the principal of the school, Sevinj Abbasova, placed the blame on Hajiyeva’s family, attributing the cause of the suicide to her parent’s divorce and separation. In a voice message leaked to the news website movqe.az, she called Hajiyeva a “child of an immoral and unfortunate family.”

While the death had already gained traction on social media, Abbasova’s comments spurred greater outrage, feeding into a larger discontent about the callousness of the country’s officialdom. Suicide became the most talked-about issue on the country’s active social media under the hashtag #ElinaÜçünSusma (Don’t Keep Silent for Elina).

One of the most popular posts was from Tural Yusifov, a radio presenter, who blamed the families of bullies for perpetuating malicious behavior and called on victims of bullying to contact him so that he can come to the schools and address the issues personally. “I will bring down the school on the principal if needed,” he said in an Instagram video.

Eurovision 2011 winner Nigar Jamal called for action at a higher level. The singer posted a video on Instagram addressed to President Ilham Aliyev asking for those responsible, including the principal, to be punished in the most severe way. She concluded her testimony by asking, “Mr. President, save our children.”

Some tied the death to the ongoing celebrations of Azerbaijan officially reaching the 10 million population mark, an event that has been exhaustively covered in the pro-government media.

On April 11, Hijran Huseynova, the chairperson of the Azerbaijani State Committee for Family, Women and Children Affairs said that the Ministry of Education, Ministry of Internal Affairs, and the State Committee for Family Affairs will all be involved in investigating the case. She said Aliyev and his wife, Vice President Mehriban Aliyeva, have been monitoring the case from the beginning and vowed that “whoever is guilty in this case…will be punished.”

A criminal case has been filed with the prosecutor’s office under Article 125 of the Criminal Code of Azerbaijan, which calls for a prison sentence of up to seven years for contributing to suicide.