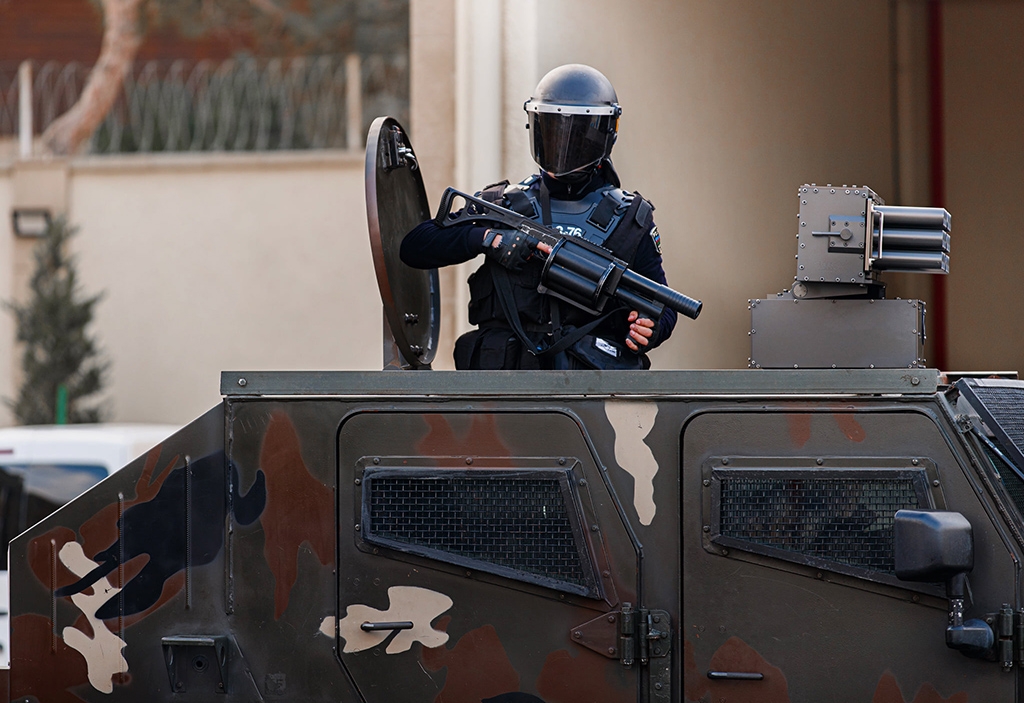 When longtime opposition figure Tofig Yagublu emerged after hours of police custody, his face bruised and eyes swollen, the image was shocking.

Azerbaijani law enforcement has long been notorious for its abuse, often torture, of people in its custody. But to leave marks such as were visible on Yagublu’s face seemed to signal an even deeper effort to intimidate the political opposition – one some connect to the government’s newly emboldened attitude following its victory over Armenia in last year’s war.

Yagublu was detained on December 1 at a Baku rally in support of Saleh Rustamli, a fellow oppositionist, who had been on hunger strike in prison since early November.

Yagublu was beaten repeatedly in jail, then put in a car and driven far out of the city by plainclothes police officers, he later told journalists.

“The entire time, they were hitting me and demanding that I say on camera that I would give up our struggle,” Yagublu recalled, “I said no, and they kept hitting me.”

When he was finally released, Yagublu – unable to see through swollen eyes – learnt from locals that he was in the town of Alat, 76 kilometers south of Baku, and called his daughter for help.

Yagublu’s abuse was unique even in Azerbaijan, where many political and other prisoners have reported over the years that they were tortured by law enforcement officers, as documented in a 2019 report by the United Nations. But in most cases, officers seem to have been careful not to leave such visible marks.

This time, though, several participants reported that police officers seemed to be specifically ordering subordinates to treat the detainees badly, shouting things like “twist him” and “beat his arm.”

The human rights group Defense Line monitored the rally and the police response to it, and found that it was characterized by “unusual cruelty and intolerance” on the part of the police, the group’s director Rufat Safarov told VOA.

Defense Line had a meeting on December 13 with Interior Minister Vilayat Eyvazov and other senior ministry officials in which they brought up Yagublu’s beating and other police behavior at the December 1 rally. “The minister denied all the allegations against the police and instead claimed it was the protesters who tried to use force and that police responded adequately,” Safarov told Eurasianet.

A spokesperson for the ministry did not respond to requests for comment from Eurasianet.

On December 3, Yagublu was called into the district prosecutor’s office and questioned for four and a half hours. In an interview after his release he said he believed that the authorities know who his attackers are but they don’t have “the desire or courage to find and punish them.”

While most of those detained at the December 1 rally were freed the same day, four members of the Popular Front Party (of which Rustamli is also a member) were ordered to be held for 90 days and charged with “violating the epidemiological quarantine regime.”

That rally saw another novel development, as well: One of those arrested and charged says he was not there at all.

University student Rustam Ismayilbayli has been a regular at opposition rallies in the past, but chose to skip this one so as to not endanger his studies, his father later wrote in regional news outlet Jam News. But hours after the rally ended, Ismayilbayli went to the city center, where police found him and bundled him into a van; he is seen on video shouting that he was “not a participant” in the rally. (Ismayilbayli was released on December 15).

Meanwhile Saleh Rustamli, in whose support the rally was held, stopped his 42-day hunger strike on December 16, said his doctor, Adil Geybulla. A Turkish medical team examined Rustamli on December 9 and concluded that some brain cells – related to functions such as speaking, comprehension, and memory – had died and will not recover. On December 15, at least 20 people, including Yagublu, were detained at another rally for Rustamli’s freedom; they were later released.

Rustamli was arrested in 2019 on charges of running an illegal business and money laundering, charges Human Rights Watch has called “spurious.” When the government announced a “Victory” amnesty program at the beginning of November, pardoning up to 16,000 Azerbaijanis who were involved in some way in the conflict with Armenia, Rustamli was not on the list, despite having fought in the first war between the two sides in the 1990s. In response, Rustamli started his hunger strike with the demand that he be immediately released.

One member of parliament has spoken out in Rustamli’s defense and wrote a letter to President Ilham Aliyev asking him to pardon Rustamli. Rustamli’s lawyers have requested that the courts free him because of his deteriorating health, but authorities so far have not acted.

Some have linked the government's new tactics against the opposition to Azerbaijan’s victory in the war and what it believes to be a renewed public mandate.

“The government can still beat up even a few more citizens thanks to some prestige it gained as a result of last year’s military victory,” chairman of the semi-opposition ReAl Party Ilgar Mammadov wrote on Facebook. “It’s like credits, it spends them as it wants.”

Amrah Tahmazov, another participant in the December 1 rally, said police appeared to be treating protesters even more harshly than they had before the war.

He said that when he was detained, he was kicked in the back and Ahmad Mammadli, chairman of the opposition D18 Movement who was detained at the same time, was kicked in the face. After being put in a police van, police “literally threw” another detained activist, Konul Ahmadova, who is pregnant, in the van and tried to kick her in the belly, but Tahmazov managed to shield her, he told Eurasianet.

Another protester detained that day, Pasha Dadashzadeh, had his arm broken while in custody and an ambulance only arrived for him an hour and a half later, Tahmazov said.

He recalled a similar rally, held shortly before last year’s war, to free Yagublu (who at the time was in prison and on hunger strike), at which “no one was beaten badly” after being detained.

Police appeared to be making light of the new tactics they were adopting, Tahmazov said. “This time police were joking with each other about how ‘nicely’ they were detaining protesters and how they will be rewarded for it, the first time I have seen this at a rally,” he said. “I laughed out of anger when I heard that.”

Some, though, suggest that the government does not want to overreach and threaten its newly gained support. “The authorities are less inclined to harsh repressions, especially against ordinary citizens, as it might also have a reverse effect and damage its legitimacy,” analyst Najmin Kamilsoy told Eurasianet.