Azerbaijani government to offer tours to Karabakh for former residents

The announcement of paid tours to the region upset many of those violently displaced from the region in the 1990s, who expect to go back to live - not as tourists. 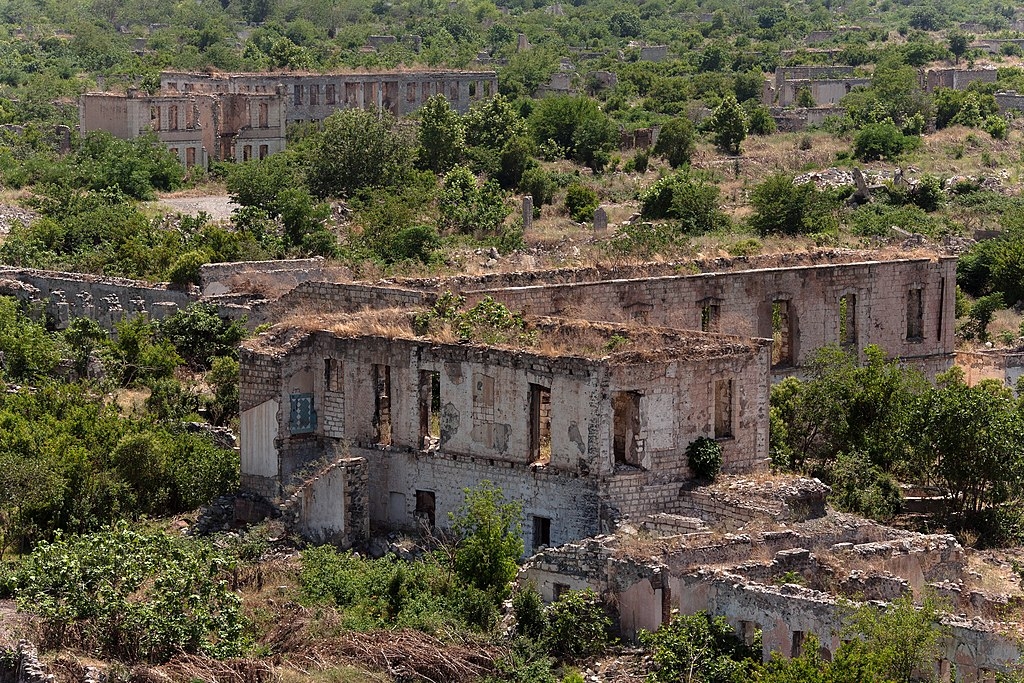 Azerbaijan’s state tourism agency is planning to offer tours to Aghdam, a city reclaimed by Azerbaijan as a result of last year’s war with Armenia. But with only distant prospects for the city’s former residents to move back, the idea of offering them tours there -- and that they will cost money -- struck many as inappropriate.

The agency’s chairman, Fuad Naghiyev, made the announcement on August 10. The tours will be oriented toward former residents of the city, which once had a population of more than 30,000 but became a ghost town following Armenia’s victory in the first war with Azerbaijan in the 1990s and Armenian forces’ subsequent occupation of the region.

Naghiyev said the tours would be paid, but emphasized that they would be affordable: “The prices will be nominal and thus not oriented toward commercial gain,” he told the local news outlet Modern.az.

Agency officials had earlier mooted the possibility of organized tours to the region. In July, Elgun Javadov, the head of the agency’s regional tourism development office, said that the agency, along with the Azerbaijan Tourism Bureau, was preparing two tourist routes: one to Aghdam and another to Fuzuli.

But those tours were not directed specifically at former residents, but toward Azerbaijani and foreign tourists generally. They would be aimed at highlighting what Javadov called “Armenian vandalism” in the region.

The day Naghiyev made the announcement, Javadov offered a few more details, telling the news site Qafazinfo that the tours to Aghdam would begin in late August, oriented toward “representatives of the older generation, mainly from Aghdam.” The trips to Fuzuli would start next year, he said, and reiterated that the prices for the tours would be “symbolic.”

The news frustrated many Azerbaijanis, particularly former residents of Aghdam, many of whom saw it as a way for the government to make money off the retaken territories before people were resettled there.

Sakhavat Mammad, a prominent war reporter for the news site Yenicag.az, who is originally from Aghdam, has been one of the most outspoken objectors. There is no logic to “taking the displaced to their native homes'' as tourists, he said in an interview with RFE/RL. He added that he wants to “see the village I was born in very much,” and noted that he had previously applied to visit Aghdam as a journalist but was rejected.

Mammad complained that the tourism agency will have the authority to decide where the tours visit and stop, thus depriving displaced people of “the chance to see their own villages. […] It is a tool to earn more money,” he said.

In a recent interview, President Ilham Aliyev said that he sympathized with Azerbaijanis displaced from the formerly occupied territories, including Aghdam, but that resettlement will be a long process.

“Of course, people who have longed for their homeland for 30 years want to return to their homeland as soon as possible. But they also know very well that all the houses and all the cities there are destroyed. You will go to the regions now, you will visit them and see that there is no city of Aghdam,” he told CNN Turk. “We are now inviting journalists, public figures and other local and foreign citizens to those areas, creating opportunities for them. At the same time, we will take the people who used to live there in the near future so that they can see those places. But we need time to return there.”

Natig Jafarli, an economist and senior official in the opposition ReAl party, called the idea of paid tours for displaced people “unethical” in an interview to local outlet Pressklub.az. “There can be organized visits of people to their former homes, with high-level security, but then it should be the job of law enforcement and the army, not the Tourism Agency,” he said.

One pro-government MP, Agil Abbas, who also was displaced from his home in Aghdam, denounced the plan as well. “There is nothing to show to tourists in Aghdam other than cemeteries,” he said. “Is it okay to take someone to his father’s grave as a tourist?”

But not everyone was against the plan.

Mansum Ibrahimov, a well-known singer of Azerbaijan’s traditional mugham music who also was born in Aghdam, told local news outlet Musavat.com that he “liked the proposal very much.”

“It should be noted that we have not seen our native place for 30 years already. I have been told that the security will be maintained at the highest level and a medical team will accompany elderly former residents,” he said.