The two foreign ministers also discussed how to resolve transportation issues that have become complicated by the new post-war order in southern Armenia. 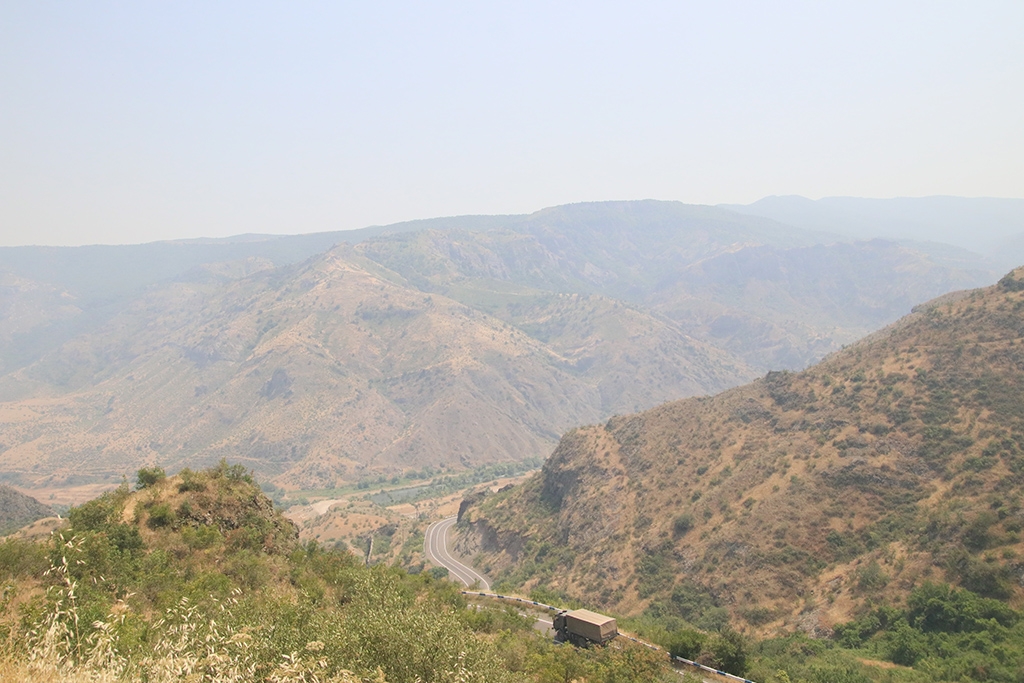 Trucks travel along a slice of Azerbaijani territory on the road that connects Iran with Armenia. (photo: Joshua Kucera)

The foreign ministers of Iran and Azerbaijan have spoken in an apparent attempt to decrease the temperature on the tensions that have erupted between the two sides in recent weeks.

Azerbaijan’s Jeyhun Bayramov spoke with his Iranian counterpart Hossein Amir-Abdollahian by phone on October 13. The readouts from both sides referred to the heated mutual accusations that Baku and Tehran have been hurling at the other and expressed a willingness to move beyond them.

“The two countries must prevent misunderstandings in their relations,” the Iranian Foreign Ministry said in its statement following the call. “Tehran and Baku have enemies and the two sides should not give the enemies the opportunity to disrupt relations between the two countries and concerns should be resolved through dialogue and cooperation.”

The Azerbaijani statement echoed that sentiment (minus the reference to “enemies”): “The sides noted the harmful rhetoric observed recently, which does not correspond to the level of friendly relations between our countries, and the need to resolve all differences through dialogue.”

While the real cause of the vitriol remains unclear, the spark was the Azerbaijani authorities’ arrest in September of two Iranian truck drivers on a section of the main road through southern Armenia that passes through some slices of Azerbaijani territory.

Following the October 13 conversation, Iran announced that two Iranian prisoners currently held in Azerbaijan would be extradited to their home country, and some media mistakenly reported that the prisoners were the two truck drivers.

Both Bayramov and Amir-Abdollahian did mention the transit issue, though, suggesting the two sides were working on a way to resolve it.

As a result of Azerbaijan’s victory in the war last year over Armenia, it regained control of most of its territory along Armenia’s border that it had lost in the first war between the two sides in the 1990s. That included some slices of land through which the main road through Armenia passes. That road is the main artery between Armenia and Iran, and Iranian trucks use it to supply Armenia as well as – occasionally and controversially – Karabakh.

The two Iranian drivers arrested were reportedly shipping cargo to Karabakh, and while Azerbaijan’s customs service denied that they had been released, as they did so they made public some new information about the drivers, including their names and the crimes they have been charged with.

According to a statement from the customs service, the two drivers, Barzegar Haghi Jafar Ghazanfar and Norouzi Shahroud Heidar, were arrested for “smuggling” goods into Karabakh, crossing Azerbaijan’s border without permission and outside an official border crossing. (Karabakh is internationally recognized as Azerbaijani territory, and Baku takes a hard line on entries into the territory via Armenia.)

A criminal case has been launched and an investigation is underway, the customs service said: “Reports that they [Ghazanfar and Heidar] have been returned to their home country do not reflect the truth.”

The conversation between Bayramov and Amir-Abdollahian apparently touched on how to avoid these sorts of incidents in the future.

“Amir-Abdollahian … said Tehran expects that the problem of transit traffic of Iranian trucks in the Azerbaijan Republic will be solved,” the Iranian statement read. The Iranian side also said that Bayramov “suggested that the two countries' customs officials hold talks to solve the problem of the transit of Iranian goods” and “stressed the pursuit of the release of two Iranian truck drivers detained in the Azerbaijan Republic,” though the Azerbaijani statement did not go as far on either of those points.

“It was decided to discuss issues related to transit transportation through the Republic of Azerbaijan by the way of direct contacts between relevant government agencies,” the Azerbaijani statement read.

Iran has already expressed its willingness to help Armenia construct a new road through southern Armenia into Iran that would avoid Azerbaijani territory.

In an October 13 interview with the Italian newspaper La Repubblica, Azerbaijan President Ilham Aliyev also touched on the Iranian transit issue. Aliyev reiterated earlier statements in which he described repeated demands to Tehran to do something about the Iranian trucks going to Karabakh.

“Please, pay attention to this illegal business activity in Karabakh by Iranian businessmen,” Aliyev said Azerbaijan had told Iran. “We were not in a position to accuse [the] Iranian government. We understood that it’s some private companies who do it. But we asked to stop it. What happened in return, everybody sees.”