Azerbaijani Journalist Abducted in Georgia Sentenced to 6 Years in Prison

The journalist’s lawyers condemned the sentence as politically motivated. 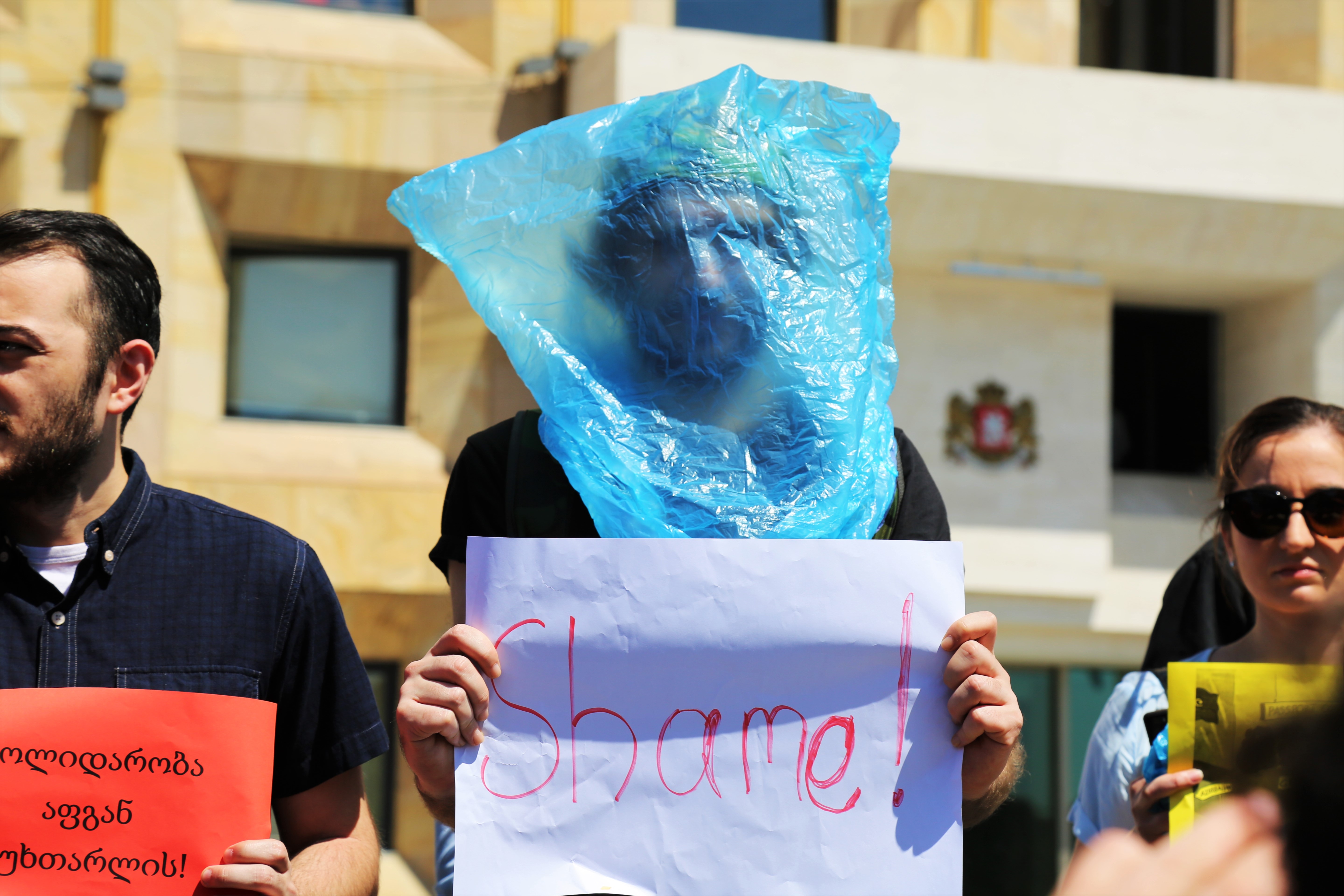 A rally in Tbilisi, Georgia, on May 31, 2017, in support of Azerbaijani journalist Afghan Mukhtarli, who was kidnapped there, allegedly by Azeri authorities, a day earlier. Some of the rally participants put bags over their heads to depict and protest the kidnapping. On January 12, Mukhtarli was sentenced to six years in prison. (photo: Giorgi Lomsadze)

Azerbaijani investigative journalist Afgan Mukhtarli, who went missing in Tbilisi in May 2017 before resurfacing in a detention facility in Baku, has been sentenced to six years in prison. The harsh term has again forced a reckoning in Georgia, which aims to portray a democratic, human rights-respecting image, about its role in the case.

Mukhtarli faced a slew of dubious charges of illegally crossing the Azerbaijani border, smuggling ten thousand euros in cash, and attacking a border official. Prosecutors had demanded an eight-year term.

After the sentencing, January 12 in Baku District Court, the journalist’s lawyers condemned the sentence as politically motivated.

“A prosecutor can’t demand a prison sentence longer than what is prescribed by the Criminal Code. In this case the prosecutor demanded that he should be sentenced to eight years, while the maximum term of imprisonment under those charges is seven years. It proves there was a political order for this,” said Elchin Sadigov, one of Mukhtarli's lawyers, the news site Meydan TV reported.

The lawyers also say Mukhtarli did not cross the border voluntarily, and that he was kidnapped from neighboring Georgia.

Speaking at his sentencing hearing, Mukhtarli said his persecution was motivated by his investigations into the Azerbaijani government’s corruption. In his final plea, he recounted the issues he has been investigating, including the misappropriation of funds in the Ministry of Defense, and the Baku ruling elite’s investments in the Georgian banking sector.

“You can arrest or kill us, but others will continue the struggle. Our goal is not to overthrow Ilham Aliyev, but to give people hope,” he concluded.

The sentencing evoked a wave of criticism from Western governments and rights organizations.

Levan Asatiani, Amnesty International’s Regional Campaigner in the South Caucasus, said Mukhtarli “is a prisoner of conscience and must be immediately and unconditionally released.”

In its official statement on the trial, the U.S. Department of State expressed its concern: “We urge the government of Azerbaijan to release Mr. Mukhtarli and all those incarcerated for exercising their fundamental freedoms.”

Heather Nauert, a spokesperson for the State Department, later added on Twitter that: “We continue to closely follow the Georgian investigation into the reported abduction, and reiterate our call that it must be full, transparent, and timely.”

The authorities in Baku hit back at the accusations that the trial was politicized. “It is not right to distort the essence of an act of crime in a country and portray it as a restriction of the freedoms of speech and information,” said Ali Hasanov, a senior adviser to President Ilham Aliyev.

Georgia’s opposition parties, as well as the President of Georgia Giorgi Margvelashvili have all criticized the government for its handling of the investigation.

Mukhtarli says that on May 29 2017, several Georgian-speaking men wearing Georgian police uniforms beat him, threw him in the back of a car, and drove him across the border. He had originally fled to Georgia in January 2015 to avoid prosecution for a series of investigative reports into high-level corruption in the Azerbaijani government.

Writing on Facebook, Mukhtarli’s wife, Azerbaijani journalist and activist Leyla Mustafayeva labeled the verdict “a joint decision by the Georgian and Azerbaijani authorities, since the Georgian Dream government is complicit in Afgan’s arrest and imprisonment.”

Some accuse the Georgian government of failing to investigate the case, and some even accuse it of deliberately obstructing justice. A major human rights report published last year argues that in incidents of harassment reported by Azerbaijani exiles in Georgia, Tbilisi’s authorities have failed to identify a single perpetrator, let alone arrest anyone. These incidents cast doubt over Tbilisi’s ability to protect the human rights of people in the country.

Further reports suggest a number of asylum applications for residence permits and asylum lodged by Azerbaijani exiles have been rejected by Georgian authorities on questionable grounds.

According to statistics provided by the Georgia government, more than half of the individuals denied entry into Georgia between 2016 and 2017 were from Azerbaijan.

Speaking in December, Georgian Prime Minister Giorgi Kvirikashvili said the then-ongoing case was “a very difficult issue and we acknowledge that it is a very serious failure.”