Some Azerbaijanis cheered their representatives standing up to a Russian presence they consider pro-Armenian. Others, though, pointed out the hypocrisy. 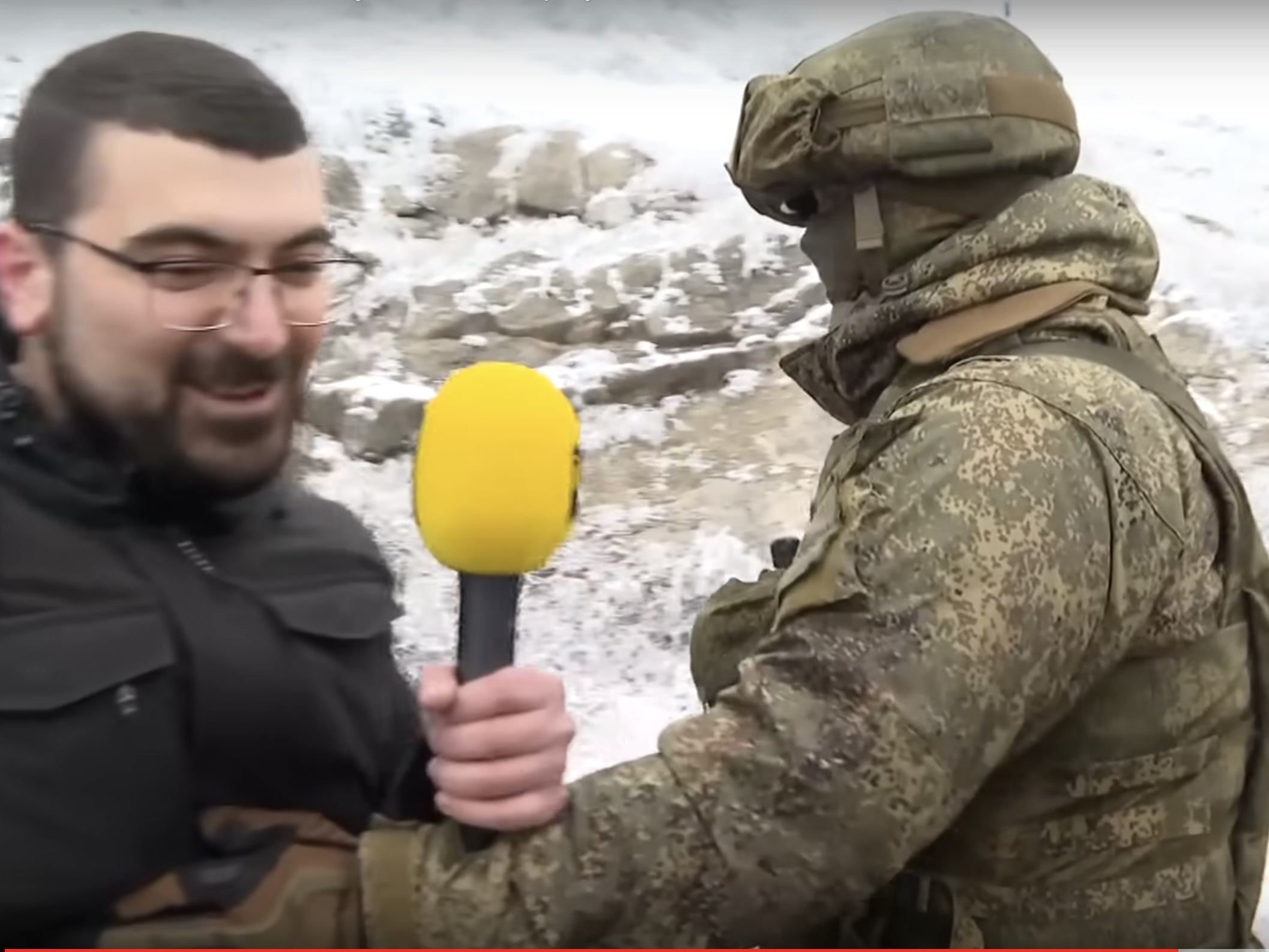 Screenshot of an Azerbaijan public television report on the Russian peacekeepers in Karabakh.

Azerbaijani state journalists and Russian peacekeepers in Karabakh have engaged in a series of confrontations that have been widely publicized in Azerbaijan, adding fuel to the debate about the Russian military role there.

The confrontations began on December 3, when a group of Azerbaijani state workers attempted to gain access to the part of Nagorno-Karabakh under the jurisdiction of the Russian peacekeeping force, asking that the Russians allow them in to investigate reports of illegal mining in the territory. The resulting standoff briefly blocked the only road connecting Nagorno-Karabakh to Armenia.

The state workers were accompanied by journalists from several Azerbaijani media outlets, including the public Ictimai Television, which broadcast a series of the discussions between the reporters and the Russian soldiers. A heavy emphasis was put on the fact that the Russians were restricting the Azerbaijanis’ movement around their own country, adding ammunition to an already growing Azerbaijani state narrative aimed at discrediting the peacekeepers.

In the initial report, aired on the day of the blockage, Russian soldiers were only briefly covered. After the journalists were initially refused entry into the peacekeepers’ zone of responsibility, the Russian soldiers on duty kept referring the matter up the chain of command until a colonel was forced to summon their commander, Major General Andrey Volkov, to the scene to resolve the standoff. “The Russian peacekeeper, like his comrades before him, could not bear the legitimate demands of the citizens of Azerbaijan,” the report said.

(According to the peace agreement that ended the 2020 war between Armenians and Azerbaijan, control of the territory surrounding the road, known as the Lachin corridor, was handed back to Azerbaijan, while the monitoring of the road itself was to be the purview of the Russian peacekeepers.)

The standoff concluded in an agreement to set up a meeting with the ministry officials and Russian peacekeepers inside the Russian-controlled part of Karabakh.

The interactions with the Russian peacekeepers provided the Azerbaijani journalists with plenty of material with which to cast a critical eye on the Russians’ practices. Two days after the event Ictimai aired another report, from the same scene, titled “Inner Face of Russian Peacekeepers - How Do Armed Armenians Hide Behind Them?” The report highlighted a pair of Armenian policemen who were lurking in the background, and an Azerbaijani reporter asking a Russian soldier why they were there.

The dialogue followed, in Russian:

- Why did the people in those uniforms come here?
- They are police.
- Which policemen?
- The police.
- From where?
- From Khankandi. (The Azerbaijani name for the de facto capital of Nagorno-Karabakh)
- From Khankandi? They have no right to it.
- What does he not have the right to?
- To come here.
- Why?
- They are not recognized. This is our land.

In another dialogue, one Russian soldier questioned what the journalists were doing:

- I am a journalist and he is a journalist. We record, that's our job.
- Why?
- For ourselves. We need it because it's our job. A journalist's job is to record. Why do you walk around with a machine gun? You don't need a gun right now, do you?
- Why is it not necessary?
- Do you need a machine gun right now?
- We serve here.
- We also provide our service here. You don't use this gun, do you?
- What should I do? Should I start using it?

“It only took a few hours for the Russian peacekeepers to create doubts about their work,” the narrator said in the report. “They do not consider the separatists to be separatists, and they are unable to properly check the posts.”

At a subsequent meeting between the Russians and Azerbaijanis, in Khojaly on December 7, the Russian peacekeepers again blocked the road to Azerbaijani journalists who were trying to go and cover the event, resulting in a brief physical confrontation.

“The commander of the Russian peacekeeping contingent, Andrey Volkov, prevented Azerbaijani media from moving in the Azerbaijani territory,” Ictimai’s news director, Fikrat Dolukhanov, said in a report on that episode. “There is no justification for this, and we are now trying to pass through a checkpoint of Russians.”

He manages to pass but soon after a van full of soldiers arrives on the scene and effectively prevents the journalists from proceeding further.

Another report from state television AzTV depicted Russian soldiers holding hands to create a barrier in front of journalists. “They are stopping our way forward just like we have seen in many videos as members of law enforcement stop participants of demonstrations,” the reporter said, apparently referring to anti-war rallies in Russia following the Ukraine invasion.

Azerbaijani media has long been critical of Russian peacekeepers, arguing that they display a consistent bias toward the Armenian side.

The filmed interactions gave Azerbaijanis yet more ammunition with which to make that claim.

“Way to go, Fikret Dolukhanov!” Anar Tahirov, the general director of a pro-government outlet, Bizim Media, wrote on Facebook. “He fearlessly passed the barrier and crossed into our sovereign land.”

The Azerbaijani state’s newfound enthusiasm for journalists’ rights to do their job unhindered struck some as hypocritical, given the way that independent Azerbaijani journalists are treated in the country.

"’Media don't interfere,’ ‘Get the media out of here’ - that's what independent journalists hear every time from the Azerbaijani police," journalist Ulviyya Ali wrote on Twitter in a response to Arpadarai’s post.

While the 2020 ceasefire agreement stipulates Russian peacekeepers have control over most of Nagorno-Karabakh, it remains unclear exactly what their policy is in terms of who can be let into the territory. Foreign journalists, for example, are no longer allowed to enter.

"These forces [Russians] are deciding whom to let into their zone of responsibility by intuition," political commentator Elman Fattah told online news outlet Toplum TV. "In that sense, it’s an open question whether peacekeepers have a right not to let journalists into Azerbaijan's sovereign territory. We're talking about territories that even Azerbaijan's president hasn't visited yet."