While the government has maintained a deeply cautious stance, coverage of the war in the state-controlled media has shown a clear, albeit implicit, pro-Ukraine stance. 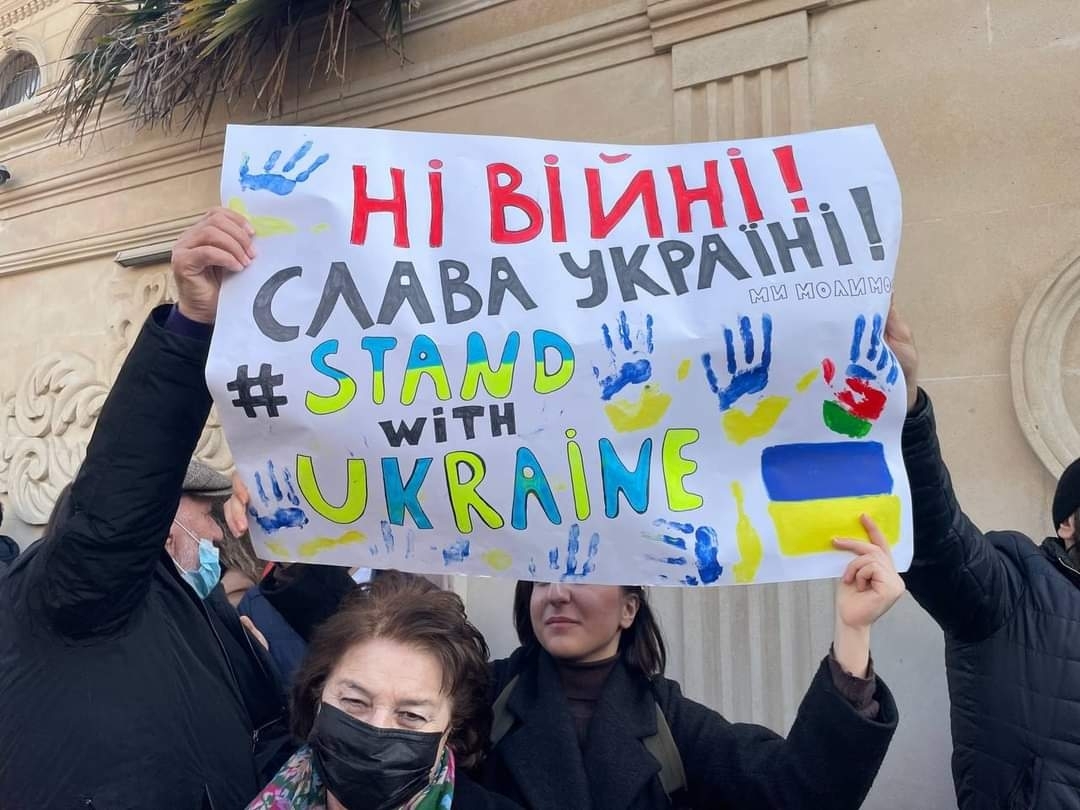 Ukraine supporters at a rally in Baku at the Ukrainian embassy. (photo: Ulviyya Ali, Twitter)

As war in Ukraine rages, Azerbaijan’s government has been trying to avoid the subject, and when it is forced to address it, trying hard not to take sides.

But watching the coverage of the war in the country’s tightly controlled media suggests a clear, if understated, sympathy for the Ukrainian side and criticism of the Russian invasion.

For the most part, news outlets cover the conflict as straight news, rarely producing editorial pieces that it might in other big news events.

That is not an accident. The regular instructions that state-friendly media get from the government have been urging caution.

“Hello! You’re asked to maintain a certain balance on the Ukraine topic, introducing only official news and not open discussions,” read one message from early in the war that was leaked to Eurasianet.

While pro-government media has been following those instructions, for the most part the official news they decide to run hew decidedly pro-Ukraine, featuring reports of Russian attacks on civilians and on its reported recruitment of foreign mercenaries.

The coverage reflects an overall Azerbaijani sympathy for Ukraine, which has long supported Azerbaijan in the latter’s conflict with Armenia. But while official Baku has also taken great pains to avoid directly blaming Moscow for starting the war, the media appear to have been given a bit looser rein to do so.

Some publications have been overt with their editorial judgments.

When Azerbaijan’s honorary consulate in Kharkiv was damaged in Russian shelling, official Baku remained virtually silent. Azerbaijan's Foreign Ministry published only a stick-to-the-facts statement about the attack, reporting that no employee was hurt and that staff were transferred to "a safe place.”

But the news outlet Haqqin ran a sharply critical piece on March 8, headlined “Why are the Russians shooting at the Azerbaijani consulate?”

"According to the Ukrainian authorities, Russian troops continue to blindly shell the civilian population of the city with the sole purpose of achieving what they want - to capture the impregnable and unruly Russian-speaking Kharkiv," the story reads. "In the name of achieving denazification, Russian troops are walking over the corpses of Kharkiv residents, that is, ethnic Russians."

Another piece in one of Azerbaijan’s main news agencies, Report.az, accused Russia of being “unjust” in its invasion. It noted that the Kremlin initially justified the war as a means of protecting the newly recognized separatist Luhansk and Donetsk regions. “However, the fighting continues with the bombing of civilian objects and settlements far from the Donbas.”

The article went on to blame the West for insufficiently supporting Ukraine, approvingly citing Ukrainian President Volodomyr Zelenskiy’s criticism of NATO’s refusal to impose a no-fly zone in Ukraine. “The head of Ukraine, which is fighting for its territorial integrity and sovereignty, as well as for the values and security of the West, is disappointed with NATO’s decision.”

Pro-government media have been more cautious on a story sensitive to many Azerbaijanis: the plight of Azerbaijani citizens who were living in Ukraine and are now trying to flee the fighting. Social media and independent journalists have been documenting how many of those trying to flee have been dismayed that the Azerbaijani embassy was “out of reach” and they were forced to escape the country on their own.

Journalists got instructions about this issue as well: to only address questions to the press office of the Ministry of Foreign Affairs. “Announcements will be delivered in a centralized manner,” the message said.

Accordingly, pro-government media have been sticking closely to the official line, reprinting only official statements, including one on March 4 from Azerbaijan’s Ambassador to Ukraine, Elmira Akhundova, announcing that all female and elderly diplomats have been evacuated out of the country, and that she was among them. “I am not only an ambassador, but also a woman,” she wrote.

With additional reporting from an Azerbaijani journalist.