The appearance of new Azerbaijani positions has sown "panic" in a nearby Armenian village, one resident reported. 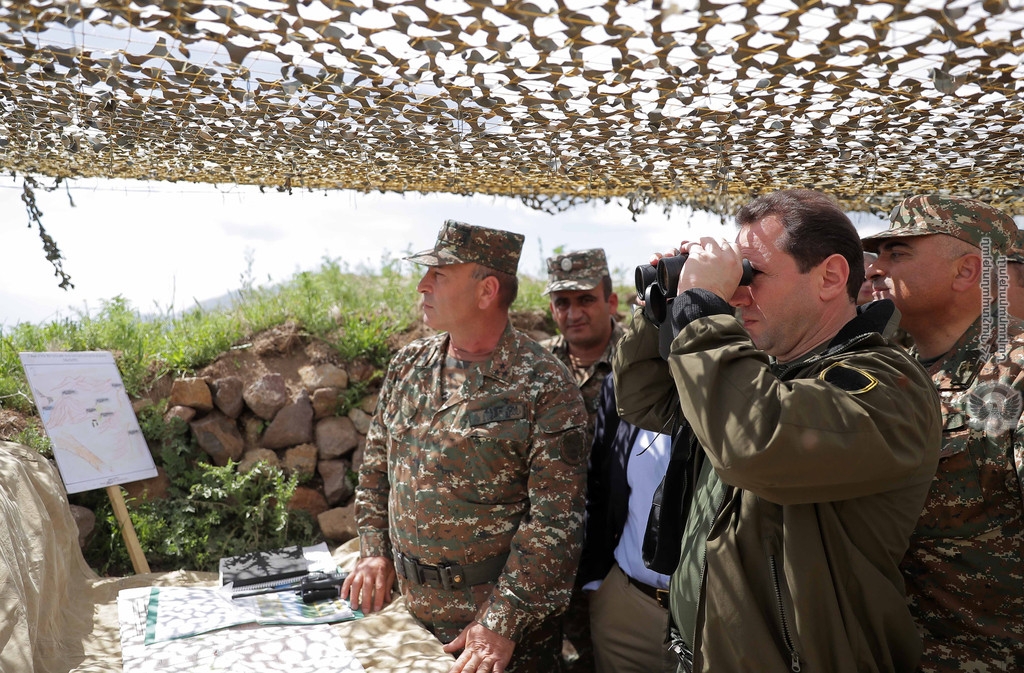 Armenian Defense Minister David Tonoyan inspects military positions near the border with Azerbaijan's exclave of Nakhchivan on May 19. (photo: mil.am)

Azerbaijan's military has advanced further into a no man's land on the border with Armenia, causing panic in the nearby Armenian areas, local media have reported. Armenia's military leadership has tried to downplay the advance, while Azerbaijan has been silent.

The advance seems to have taken place without any fighting, and the Azerbaijani forces remain on their side of the internationally recognized border. But they have reportedly taken up new positions in a previously unoccupied neutral zone in Azerbaijan's exclave of Nakhchivan near the Armenian village of Areni.

The height now controlled by Azerbaijan “gave the enemy [i.e. Armenia] the ability to control and target the village of Gunnut [in Nakhchivan],” the Azerbaijani website haqqin.az reported. “The strategic significance of this height is that it allows [Azerbaijan] to control the Yerevan-Goris-Gafan-Lachin highway.”

The Azerbaijani Ministry of Defense did not respond to a request for comment from haqqin, the site reported.

An Azerbaijani military blogger also reported on the movement, citing his sources in the military, but the post was taken down shortly thereafter, haqqin reported.

It does seem to have been confirmed by a number of Armenian sources. One Armenian military reporter, commenting on the recent appointment of Artak Davtyan as the country's new chief of general staff, noted that Davtyan's previous area of responsibility included the area near Azerbaijan's new position.

“Even the appointment of Artak Davtyan causes, at minimum, confusion against the background of what happened in recent days in the Nakhchivan area of the border between Armenia and Azerbaijan,” said the reporter, Edik Baghdasaryan, in an interview with the news site EADaily. “The Azerbaijanis were able to advance their positions in the neutral zone and take under control a huge amount of territory.”

A spokesman for the Armenian Ministry of Defense downplayed the development. “I can't say” whether Azerbaijan had really taken up new positions, said the spokesman, Artsrun Hovannisyan, in an interview with The Armenian Times. “Azerbaijan can locate positions on its own territory. Their positions are located inside their country, there is no change in our position, no sort of activity.” To Tumanyan's report of panic in Areni, he said merely: “There is no reason for panic.”

Nakhchivan has become a flashpoint of late, with President Ilham Aliyev visiting the exclave on May 16 and reiterating his claim that missiles based there “can destroy any enemy target.” Azerbaijan has in recent years been putting a priority on building up its military forces in the region, which is the closest Azerbaijani territory to Armenia's capital, Yerevan.

Three days later, Armenia's new ministers of defense and foreign affairs made one of their first visits after being appointed to the border with Nakhchivan, where they made a show of examining the military positions there.

The two ministers “studied the operative situation, then discussed the peculiarities of the service with the command of the army corps,” the Ministry of Defense announced in a statement. “[Defense] Minister [David] Tonoyan instructed the commanders to always keep alert, not to give way to provocations, and strictly thwart any attempts of the adversary.”

“Azerbaijan pursues a policy of a gradual increase of tension on Armenia-Nakhchivan border,” said David Shahnazaryan, a political analyst in Yerevan. Shahnazaryan suggested that Baku's aim was to bring Turkey into the international negotiations between Armenia and Azerbaijan; Turkey has a treaty obligation to protect Nakhchivan under the 1921 Kars Treaty.

The action comes at a sensitive time, with a new government in Yerevan that Baku may be interested in testing. Newly elected Prime Minister Nikol Pashinyan faced accusations of being soft on Karabakh from his opponents in the former ruling Republican Party. Since taking office he has made efforts to bolster his hawkish credentials, staking out a harder line position against Azerbaijan and publicly announcing that his 18-year-old son is enlisting in the military and will be sent to Karabakh.