They face obstacles, though, including globalization and an education system that gives little time to minority languages. 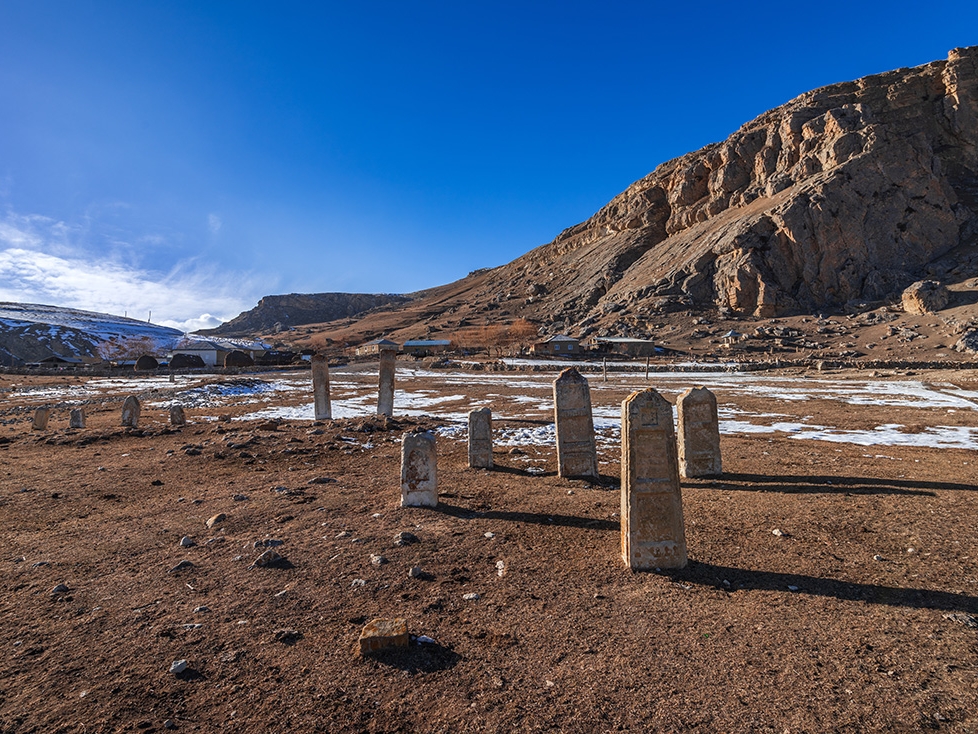 The village and the language of Gryz are dying. (Shutterstock)

Israfil Hummatov, a 71-year-old member of Azerbaijan’s Gryz ethnic minority, grew up speaking Gryz, a Caucasian language unrelated to the Turkic Azerbaijani. But as he looks at the younger generations of his people, he sees fewer fluent speakers. He’s not optimistic that the language can survive.

“To preserve a language, it, first and foremost, must be spoken,” he told Eurasianet in an interview at his home in the northeastern Azerbaijani city of Khachmaz. “When the next generation comes up, the Gryz language will find its place among the dead languages, as it’s not spoken often.”

It is a process visible even in Hummatov’s own home: He speaks Gryz with his wife, but when he wants more tea, he asks one of his grandchildren – in Azerbaijani – to bring it to him.

Khachmaz, and neighboring Guba, are the centers of the Gryz people, also known as the Kyrts. The people trace their history back to the ancient kingdom of Albania, which existed on the territory of today’s Azerbaijan, but now number between just 10 and 15 thousand, Hummatov estimates. Even fewer speak the language.

Hummatov was born in a nearby village – also named Gryz – which today is the only ethnic Gryz village in Azerbaijan with a school. He visited and found that there are now under 20 students and most of their mothers are non-Gryz. “I asked the kids simple questions, like, ‘Whose grandkids are you?’ in Gryz. They couldn’t reply,” he said. 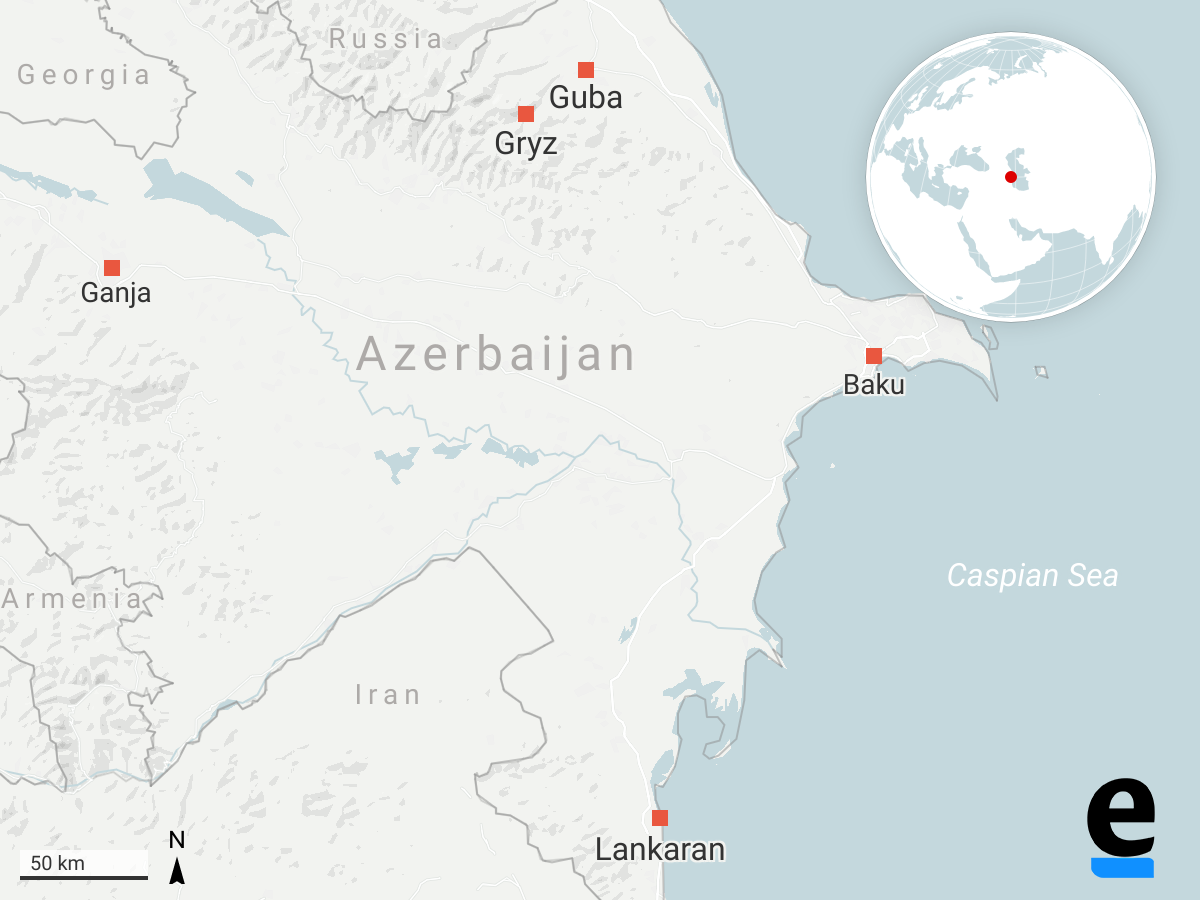 Hummatov, a retired history teacher, is trying to do his part: Along with a scholar from Germany he co-wrote the first Gryz dictionary – with translations into Azerbaijani and English – in 2020. The dictionary also establishes the first writing system, based on the Latin alphabet, for Gryz, and contains 4,000 words. “It was not an easy task. You need to have a wide vocabulary. There are words that are forgotten, not used anymore,” Hummatov told Eurasianet.

And Gryz is not alone, but one of several small languages in Azerbaijan that are facing the same fate. Tat, Tsakhur and Lezgin also are on the verge of extinction, like many small languages around the world.

Gryz communities traditionally did not marry their daughters to non-Gryz people, Hummatov recalls, so as to keep their language and culture intact. “But from the 1970s and ‘80s on, with the advent of the information era and expansion of relations among communities, the Gryz gradually moved away,” he said. “For example, in my village there used to be nearly 700 houses, while now there are only 30 houses. Young Gryz people leave for better job markets.”

Meanwhile, the education system for the Gryz and other minorities who do remain in their communities discourages mastery of the language.

Schools in minority areas are conducted in the state language, Azerbaijani, with only an hour per week of classes in the minority language.

“In addition, if the parents and students in those classes wish, an hour of class time normally allocated to extracurricular activities can be included in the lesson schedule and given to the teaching of their mother tongue,” the press service of the Ministry of Education and Science told Eurasianet in a written response to questions. In most minority communities, minority language instruction ends after the fourth grade, though in Lezgin schools it continues through the 10th grade.

But the school in the Gryz village doesn’t even get that one hour in Gryz that the law allows them.

The reason: no textbooks in Gryz, Hummatov said. He has tried to work with teachers in the Gryz school to develop a textbook, but it hasn’t gone anywhere yet, he said. “Teachers and educators in the community need to come up with draft schoolbooks and submit them to the Education Ministry for approval,” Hummatov said. “The state is ready to support, funding-wise or by other means, but the community has to show enthusiasm.”

Others, though, put more of the onus on the authorities. The Public Council of Azerbaijani Talysh – an organization aimed at protecting the rights of the Talysh minority – issued a lengthy statement in 2020 detailing the situation of the Talysh language. It criticized the “relevant authorities” for the fact that the most recent textbooks in Talysh were published in 2006, and that there have been no replacements since then.

The ministry said that a new line of textbooks in minority languages have been prepared. “It is planned to bring those textbooks to public discussion, to take into account the comments and suggestions that the ministry receives, and to print and deliver the textbook sets to schools,” it said.

A lack of teachers, the result of a lack of university programs aimed at producing minority-language teachers, also are obstacles for minority groups.

In the case of Talysh schools, the teachers often are recruited from other subjects, mostly primary school teachers, said Hilal Mammadov, the editor-in-chief of the Talysh newspaper Tolishi Sado and a co-founder of the Public Council. “It happens that even they are not native speakers of Talysh, and often they will engage students in extracurricular activities during the Talysh lessons,” he told Eurasianet.

Azerbaijan ratified the Council of Europe’s Framework Agreement on the Protection of National Minorities in 2000, which obligates Baku to take a number of steps toward protecting and promoting minority languages. But Mammadov said that the regular reports that the government files to the Council are “formalities” and that in fact various obligations are not fulfilled. As an example, he noted that the convention commits Azerbaijan to “promote a diverse media space with broadcasting in minority languages and support to minority media.” But when Mammadov tried to get a 15-minute weekly slot on public television for Talysh-language programming, he was denied, he said.

The authorities, meanwhile, have blamed lack of public interest for the lack of Talysh teacher training. While there used to be a Talysh education program at Lankaran State University, located in the southeastern part of Azerbaijan where the Talysh people are concentrated, it was terminated.

Mammadov disputed that interpretation: “If tomorrow the majority of Azerbaijanis agree to suspend Azerbaijani language class or any other subject, should the state go along with that?” In any case, he argued, it didn’t accurately represent the wishes of the Talysh people.

He noted that young people, in particular, were devoted to maintaining the language. “The Talysh youth are really interested to learn about their roots and culture,” he said. “Even though their parents might have encouraged their kids to learn the state or foreign languages when they are young, it’s interesting: After a certain age, the young people become eager to learn their native language.”