Many have seen it as a rare case in which the police were the recipients, rather than perpetrators, of abuse. 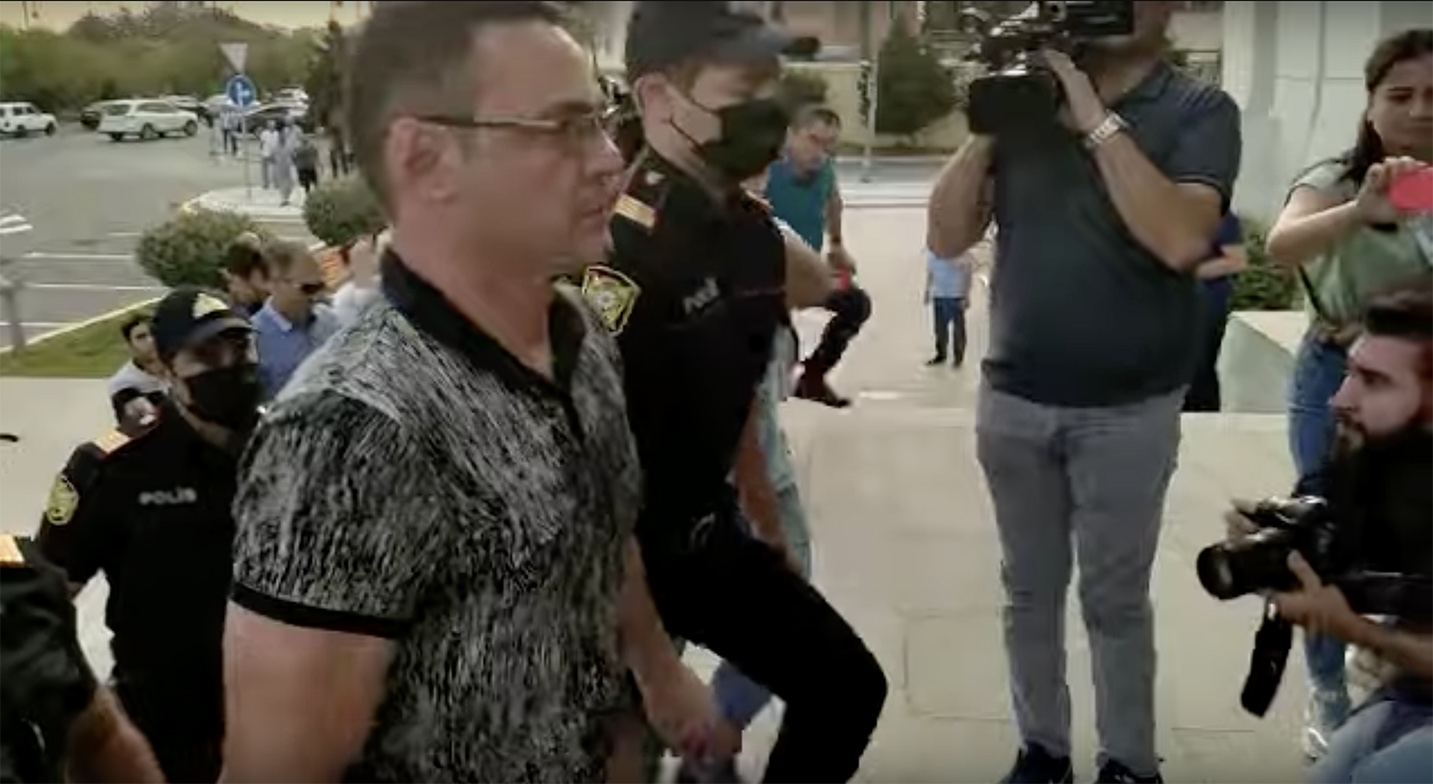 A member of Azerbaijan’s parliament has been arrested on charges that he beat a police officer, in what many in the country saw as an ironic twist to a long record of police abuse of citizens.

Eldaniz Salimov, a member of parliament from the ruling New Azerbaijan Party, was taken into custody in a Baku court on August 3. The court ruled that Salimov would stay under arrest for three months while the case is being investigated.

Salimov is accused of physically attacking a police officer on July 29 at a restaurant in the city of Khachmaz, which independent journalist Habib Muntezir reported belonged to a close relative of the lawmaker.

The alleged attack occurred at about 1 a.m., when six police officers raided the restaurant demanding it be closed; according to the country’s COVID-19 restrictions restaurants are supposed to close at midnight.

Following the raid, Salimov phoned the father of one of the officers, Zaur Mirzayev, and summoned the officer back to the restaurant. There Salimov “committed assault on him,” General Prosecutor Kamran Aliyev wrote in his August 3 report to parliament on the incident. The charges against the MP carry a sentence of between three and eight years in prison.

The authorities initially stayed silent. When the case was first reported in local media, Ministry of Interior Affairs spokesperson Elshad Hajiyev told local news outlet Axar.az that the ministry had not received information on any case involving an assault on police. The New Azerbaijan Party said in a statement that it would release an official response only after law enforcement agencies investigated.

But on August 1, the accused himself took to Facebook and admitted to his “wrong behavior,” saying that was the reason he had initially kept silent. Salimov apologized to President Ilham Aliyev, his colleagues in parliament, and the nation for “my mistake.” He also, though, wrote that there were “reasons, blackmails, and pressures leading me to my mistake,” and that he wants to believe the investigators will determine what happened “objectively.”

The following day, the party’s local Khachmaz office adopted a decision to remove Salimov from the party, and the day after that parliament held a snap session in which it voted nearly unanimously to deprive Salimov of his parliamentary immunity.

Salimov told police “you should be proud that you were beaten by a member of parliament,” another MP, Fazail Agamali, reported at the session.

One MP who voted against stripping immunity was Tahir Karimli, who voiced a rare criticism of the police in his defense of Salimov. “Whenever they want, the police, prosecutors and others are able to find whatever they want about me and my family,” he said in the session. “We undermine ourselves so much,” he said of the decision to strip Salimov of his immunity.

The episode drew wide public attention, and many saw it in the context of a larger problem of police abuse in the country.

In one notorious incident, in June 2020, tension over the COVID-19 lockdown spilled over into clashes between citizens and police. After one man in Baku’s Yasamal district was detained, neighbors showered the arresting officers with garbage. The next morning, officers returned to the building and detained nine people, removing them from the building roughly, some of them in various states of undress. Some of the detainees later said they were tortured at the police station.

Activist Mehman Huseynov referred to that episode in a Facebook post, joking that he expects Salimov “to be taken out of his house naked and on camera.” Muntazir wrote sarcastically: “No one can beat the Azerbaijani police, police themselves hold the monopoly on beating.”

Bakhtiyar Hajiyev, another activist and former parliament candidate, speculated that Salimov was being set up for some political reason. “In Azerbaijan everyone is equal before the law (read: mafia rules),” he wrote in his own joking Facebook post. “Whoever commits a crime (read: betrays politically), gets punished. Even (read: especially) if it is an MP elected (read: appointed) from the ruling party.”

But Hajiyev did not speculate as to what Salimov’s political crime might have been, and the MP had previously been a little-known figure rarely making the news.

The authorities’ attempt to present Salimov’s arrest as demonstrating Azerbaijan’s dedication to the rule of law did not convince opposition leader Ali Karimli. “Police have proven that they are the rulers in the country,” he wrote. “Where was the ‘rule of law’ in Yasamal when police took people out of their beds and beat them in public?”