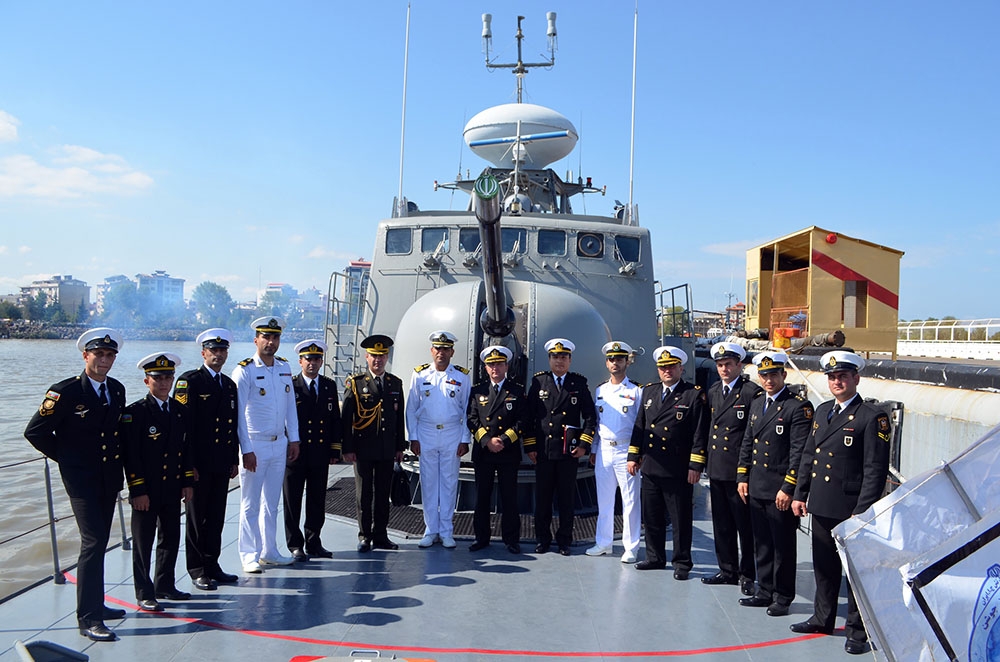 Azerbaijan's navy has made its first-ever visit to Iran, signaling warming ties between the wary neighbors and Baku's growing desire to show that it has non-Western geopolitical options.

Two Azerbaijani patrol ships visited the Iranian port of Enzeli, where the crews visited an Iranian missile boat and did some sightseeing. The visit was low-key, but it was a big step in Azerbaijan-Iran relations on the Caspian, which have generally been characterized by tension and mistrust.

There have been a number of episodes in the past two decades where Iran appeared to be trying to intimidate vessels involved in Azerbaijani oil exploration, and Azerbaijan has worried about its capacity to stand up to its much larger neighbor.

In 2001, an Iranian warship threatened a British Petroleum research vessel in Azerbaijani waters. And a fascinating set of United States diplomatic cables described another incident in 2009 when Iran moved its own oil-exploration rig into Azerbaijani waters, and Baku relied heavily on U.S. guidance to try to deal with the situation.

Lately, though, tension between Baku and Tehran has been diminishing. Since the election of President Hassan Rouhani in 2013, and a subsequent easing of international pressure on Iran, "the two states have been moving closer," Alex Vatanka, an expert on Iran's relations with the post-Soviet world at the Washington-based Middle East Institute, told The Bug Pit. "Baku did not want to be left out if Iran is successfully reintegrated into the global system."

And lately, Azerbaijan's ties with the U.S. and Europe have been under strain, which gives Baku an incentive to build closer ties with Caspian neighbors like Russia and Iran. "Azerbaijan's poor relations with the West also push Baku in this direction, particularly as Iran and Russia too have moved closer in all senses (diplomatic, economic, militarily, etc.)," Vatanka said.

"As a way of testing the waters, the visit of two boats from Azerbaijan is low-risk, low-cost and yet viewed by Baku and Tehran to send a message to the respective audiences they like to reach -- mostly the West," he said.

Iran has been noticeably more active in Caspian naval diplomacy in recent months. Earlier this year Iran made its first-ever naval visit to Kazakhstan, Kazakhstan reciprocated in September. This summer, Iran took part for the first time in the "Caspian Cup," a Russia-organized naval sporting competition that this year was hosted in Baku.

The increased tempo was noted by Iranian news agency Tasnim in its article on the Azerbaijani visit.

"Russia and Kazakhstan have already dispatched five and one peace and friendship fleets, respectively, to Bandar Anzali as part of efforts to boost international cooperation among the Caspian Sea’s littoral states," the news site wrote. "The Iranian Navy has also sent five flotillas to the sea’s littoral states to convey the Islamic Republic’s message of peace and friendship and to promote security in the region."

Vatanka said this may not be Caspian-specific, but part of a general push by Tehran to increase military cooperation activities everywhere in order to demonstrate that it's not isolated.

"Just in recent months, Iran has had military-to-military activities involving Russia, Pakistan, Turkey and Iraq," Vatanka said. "To me this suggests that the Caspian might not be a key focus as such, but part of a broader drive to showcase Iranian participation in regional security efforts."