The release comes a week ahead of a planned visit by German Chancellor Angela Merkel to Baku; Europe has been critical of Mammadov's detention. 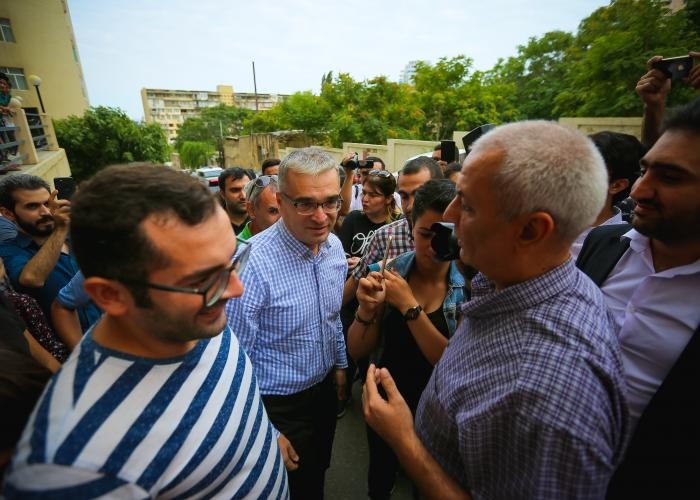 Azerbaijani opposition leader Ilgar Mammadov, amid a crowd of supporters just after being released from prison. (photo: Aziz Karimov)

Azerbaijan’s most prominent opposition leader, Ilgar Mammadov, was released from prison on August 13, a move welcomed by his many supporters in the country and abroad, but which skeptics saw as a half-measure and a transparent ploy to curry favor with Europe.

“It is a victory, but it is not a full one. We demand acquittal," Mammadov said minutes after leaving a hearing at the Shaki Court of Appeals, which suspended the two years remaining on his sentence. Mammadov had spent five years in prison. The court also banned him from leaving the country.

Mammadov later gave a speech in front of his apartment building in which he credited his release to “the solidarity of Republican young and active people and their efforts to support me. Without all these, today’s outcome would not be possible.” Mammadov said that his release was originally set for August 10, but was postponed due to a large crowd gathering in front of the court.

Mammadov was arrested in January 2013 on charges of organizing mass riots against the local government in the Ismayilli region, and was subsequently sentenced to seven years in prison. Mammadov has rejected all the accusations.

In 2014, the European Court of Human Rights ruled that Mammadov's arrest and pre-trial detention were initiated to silence him for criticizing the government. In December, the Council of Europe launched a legal action against Azerbaijan over Mammadov's detention, raising the specter that Azerbaijan could be kicked out of the 47-nation council.

Mammadov is the leader of the opposition ReAL party, and is often seen as one of the most potentially powerful challengers to the current administration. “The problem Mammadov poses for President [Ilham] Aliev is analogous to the one that Alexei Navalny (a different sort of personality but of similar standing) poses for Vladimir Putin: he represents a credible alternative to the status quo,” veteran Caucasus analyst Thomas de Waal wrote in February.

German Chancellor Angela Merkel is scheduled to visit Baku on August 23, leading to some speculation that the Azerbaijani government was trying to make a gesture to blunt potential criticism.

“This is the sound of Angela Merkel's footsteps getting close to Azerbaijan, wrote Hebib Müntezir, one of the founders of opposition media outlet Meydan TV, in a Facebook post. “Ilgar Mammadov was conditionally released. Let the same happen to other political prisoners.” Human rights activists say that Azerbaijan still has more than 150 political prisoners.

The Council of Europe welcomed the release. “We cannot accept political prisoners in Europe, innocent people should not be deprived of their liberty and the judgments of the European Court of Human Rights must be executed,” said Thorbjørn Jagland, the council's general secretary, in a statement.