If you believe the Azerbaijani authorities, opposition figures in the country have an uncanny knack for injuring themselves. 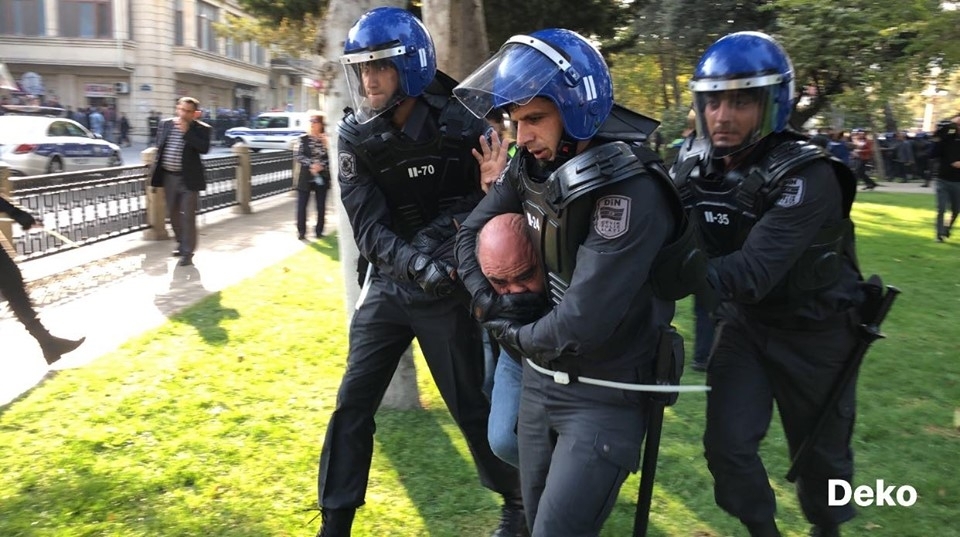 When Azerbaijani opposition leader Ali Karimli emerged from jail with stitches on his head and bruises on his face, the authorities in Baku relied on a familiar explanation.

He did it to himself.

Karimli, the head of the Popular Front Party of Azerbaijan, was detained during an October 19 rally in Baku and released later the same day. He explained that while he was in the police station, “six to seven police officers handcuffed me, threw me on the floor and kicked me.”

The authorities, though, saw it differently. “Ali Karimli did not obey the lawful orders of the police, cursed at them, inflicted bodily harm on two police officers, tried to get off the bus and, attempting to create a provocation, hit his head on the iron bars of the bus, injuring his forehead,” the general prosecutor’s office said in a statement.

After foreign governments and advocacy groups criticized the harsh crackdown on the protest and appeared to find Karimli’s account more credible, Azerbaijan’s Ministry of Foreign Affairs hit back. In a statement, the ministry accused foreign critics of exercising double standards – police treat protesters violently in Europe – and denying that anyone was seriously injured. “The police acted politely,” the statement said.

The Ministry of Internal Affairs followed up with its own statement accusing the opposition of using footage of protests in Europe in order to “discredit the image of the police.” (In fact some photos purporting to be of the crackdown on the protests were instead from Europe. But some of those were spread by what appeared to be pro-government troll accounts, and in any case the overwhelming majority of the footage shared was legitimate.)

The authorities’ explanations fooled no one, said Leila Alieva, a political analyst, a visiting scholar at the University of Oxford. “People simply laughed at the claim that Ali Karimli injured himself by hitting his head on the side of the bus,” she told Eurasianet. “And because the rally was peaceful and there was not a single case of violence from the side of the protesters, they can only deny the police brutality, as there is no way to justify it.”

But there is a long history of the Azerbaijani government making similar claims.

In 2007 Uzeyir Jafarov, an editor at the newspaper “Gundelik Azerbaycan,” was attacked by a group of men near the newspaper’s office and was hospitalized. Jafarov knew the attackers, and identified one as a police officer, and reported the incident to the police. Ramil Usubov, then the interior minister, told reporters that Jafarov in fact had injured himself by hitting his head on a pipe.

Jafarov sued, demanding that Usubov be fined and apologize. While the European Court of Human Rights ruled in 2015 in favor of Jafarov and demanded the Azerbaijani government to pay him a 14,400 euro compensation, the government has yet to comply. “Nothing is being done about it,” Jafarov told Eurasianet. Meanwhile, Usubov is now the secretary of Azerbaijan’s Security Council.

In 2014, Ilgar Nasibov, a journalist and human rights advocate in Nakhchivan, was viciously beaten in his office, but was himself charged with “deliberately inflicting damage to the health” of his assailant.

And in 2009, opposition activists Emin Milli and Adnan Hajizade were attacked at a restaurant, but when the two men reported the attack to police they were themselves charged with “hooliganism” and both served prison terms.

Meanwhile, police are rarely punished for abusing people in their custody.

“In Azerbaijan … torture and other forms of physical ill-treatment by the police and other law enforcement agencies, corruption in the whole law enforcement system and impunity remain systemic and endemic,” the Council of Europe’s Committee for the Prevention of Torture said in a 2018 report.

According to a June report from Azerbaijan’s Interior Ministry, in 2018 15,715 law enforcement officers were awarded for “exemplary service.” The same year the ministry recorded 370 instances when law enforcement officers broke the law, 92 of whom were fired. There were 297 cases of violations of human and civil rights, resulting in 27 dismissals.

At a 2013 ceremony marking the 95th anniversary of the establishment of the Azerbaijani police, President Ilham Aliyev said that in spite of international pressure on Baku because of regular violence against protesters, “no one can put pressure on us. … I said then, and I say now, that no police officer will be punished.”